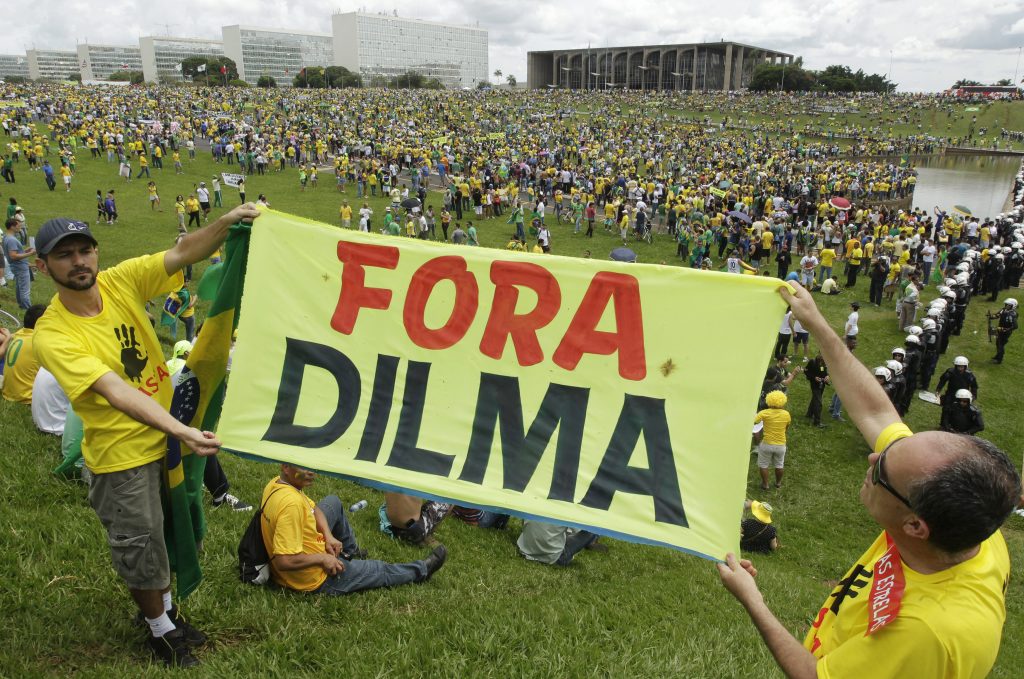 Brazilian President Dilma Rousseff is struggling with a loss of popularity and an inability to pass reforms that are critical to addressing the enormous economic challenges facing Brazil.

The current political crisis is being driven by four key factors. The first is widespread discontent with the impunity and corruption of government officials, most notably those involved in the Petrobras scandal. The second is fatigue with the Workers Party’s (PT) politics and economic policies after twelve consecutive years in power. The third factor is a stuck legislative agenda in the hands of a fragmented Congress. And finally, Dilma’s own inability to manage her coalition through Brazil’s slumping economy and evolving corruption scandals.

The combination of these four factors has put Dilma’s approval rating at around 16 percent, the lowest since the administration of Fernando Collor de Mello, who resigned in 1992. However, barring any major new revelation in the Petrobras scandal, none of the above means that the President risks imminent impeachment or is about to resign.

The protests that occurred on March 15—when two million Brazilians took to the streets—have shaken the country. The dissent will likely expand as another nationwide march is planned for April 15. Traditional organizing bodies—such as churches, unions and opposition parties—are not at the root of this protest movement. Most of the protest leadership stems from smaller, diverse, informal circles that organize through social media. This protest movement lacks the usual partisanship seen in previous marches. Indeed, this time the PT was very much one of the demonstrators’ main targets.

Over the past decade, the strategic alliance between PT’s executive power and the Brazilian Democratic Movement Party’s (PMDB) legislative power has given Brazil stability. However, under Dilma the political pact has shown deep cracks. The PMDB has opposed the government on major measures in Congress since 2012. This culminated in the election of PMDB legislators as Presidents of the House of Representatives and the Senate in February of 2015.  In other words, Dilma’s defeats have systematically occurred at the hands of her own coalition and not by the opposition, which is practically nonexistent in Brazil.

The powerful President of the House of Representatives, Eduardo Cunha, and his Senate counterpart, Renan Calheiros are both under investigation in the recent Petrobras “car wash” scandal.  [A number of directors of Brazil’s state-run oil giant Petrobras are accused of bribing politicians for contracts using money skimmed from company profits. The investigation into the scandal has been dubbed Operation Car Wash.] However, that has not slowed down either Cunha or Calheiros. They have said that the PMDB will no longer accept a role of second-class citizen during Dilma’s remaining time in office. They have demanded more posts and a larger role for the party in the government’s strategic decisions. Importantly, they have mused publicly that, without new levels of cooperation from the Dilma administration, the PMDB will be forced to move into the formal opposition and nominate its own presidential candidate in 2018.

So where does this leave the government? Knowledgeable Brazilian tealeaf readers know that the crisis Dilma’s administration faces not only consists of a loss of popular support, but also a lack of political power to pass reforms needed to combat Brazil’s economic challenges. Here is a popularity and a political crisis all rolled into one.

Dilma must rise to the occasion and do the thing she least enjoys: build consensus and mediate in order to solidify a ruling coalition. This is the only way to reestablish the country’s trust in her ability to govern. If she does this, she has a chance to transform her legacy. If she chooses instead to muddle through, Brazil’s crisis could become a nightmare of political instability and internal conflict. We have yet to see the type of transformational leadership Brazilians crave from Dilma.

Image: Demonstrators hold a banner reading "Out Dilma" during a protest against Brazilian President Dilma Rousseff in front of the Brazilian Congress in Brasilia March 15. (Reuters/Joedson Alves)