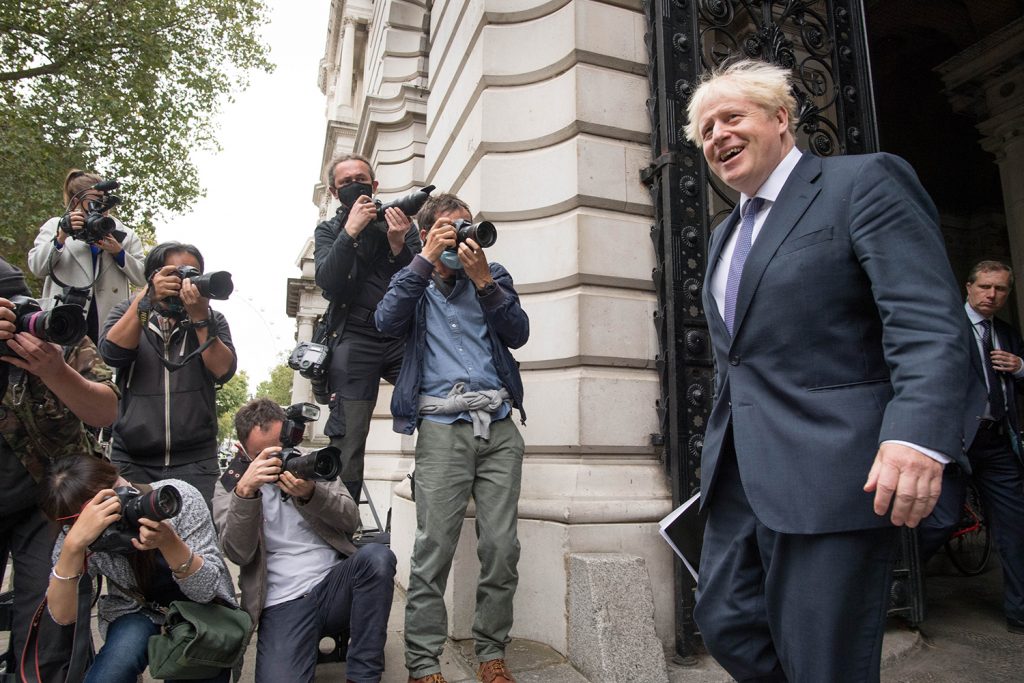 The British government openly declared that it is about to break international law in rewriting part of the EU-UK Withdrawal Agreement that secures customs arrangements between Northern Ireland and the Republic of Ireland. Is British Prime Minister Boris Johnson really putting the Northern Ireland peace agreement at risk, or is it just a ploy to improve the UK’s position in negotiating a post-Brexit trade agreement?

That’s the question Britain’s premier is posing as he threatens to complete the United Kingdom’s withdrawal from the EU without negotiating any replacement accord to the Withdrawal Agreement if current talks don’t yield a trade agreement by October 15. It’s a conundrum that has already led to harsh reactions, with Irish politicians, EU officials, and even former Prime Minister Theresa May warning that if their worst fears are confirmed, then this would threaten the Northern Ireland peace agreement and would ensure the United Kingdom gains a reputation for reneging on international treaties it had signed.

The heart of the question concerns a government plan, first reported by the Financial Times on September 7 and then confirmed by the BBC and other newspapers, that the government is expected to table amendments to a bill on the United Kingdom’s internal market that would appear to undermine key elements of the Withdrawal Agreement that it signed with the EU on October 17, 2019 and which entered into force on February 1, 2020. These amendments would focus on rewriting two key aspects of the Withdrawal Agreement’s protocol on Northern Ireland: state aid for goods traded in the British province and a requirement that Northern Irish businesses must complete export summary declarations when they ship goods to mainland Great Britain.

The protocol was a crucial element of the Withdrawal Agreement since it constituted an attempt to tackle the extraordinarily complex situation whereby Northern Ireland remains both part of the UK, which has left the EU, whilst still preserving an open border with Republic of Ireland, which remains inside the EU. The open border is crucial since it is one of the key underpinnings of the Good Friday agreement of 1998 which ended more than thirty years of violence in Northern Ireland between guerrillas of the Provisional Irish Republican Army fighting to unite the North with the Republic of Ireland and British forces committed to retaining the province as part of the United Kingdom.

The new bill, required under Article 4 of the Withdrawal Agreement, is meant to ensure that UK domestic legislation remains consistent with its obligations under the Withdrawal Agreement, with the government saying its planned changes amount to no more than tidying up loose ends. At the same time, there is a widespread view that the whole farrago is something that the backroom boys at the prime minister’s office at 10 Downing Street have dreamed up simply so they can promote an image of conflict and strife. That would then make it easier for the government to either conclude an agreement after saying it had fought the good fight on such emotive issues as fish quotas and state aid—or walk away without an agreement saying it was all the fault of EU intransigence.

Yet there are also indications that the new bill is, indeed, a genuinely serious problem, one that justifies concern in the EU and the Republic of Ireland in particular, that the British government’s action might serve to undermine the Withdrawal Agreement. The strongest indication to date came on September 8 with the news, again broken by the Financial Times, that the plan to challenge the terms of the Withdrawal Agreement had prompted the head of the UK government’s legal department, Sir Jonathan Jones, to submit his resignation. Jones was reported to have said he was “very unhappy” about the decision to overwrite parts of the Northern Ireland protocol.

Neale Richmond, Chair of the Brexit Committee in the Dáil (Irish Parliament) asked: “Are the British Government prepared to use peace on this island, the very fragile peace, only twenty-two years old, in order to get a concession on state aid or fisheries?”

Ursula von der Leyen, the president of the European Commission, tweeted on September 7: “I trust the British government to implement the Withdrawal Agreement, an obligation under international law & prerequisite for any future partnership. Protocol on Ireland/Northern Ireland is essential to protect peace and stability on the island & integrity of the single market.”

And in Britain, on September 8, Theresa May delivered a remarkable rebuke to current British Secretary of State for Northern Ireland Brandon Lewis. “The UK government signed the Withdrawal Agreement with the Northern Ireland protocol. This parliament voted for the Withdrawal Agreement into UK legislation. The government is now changing the operation of that agreement. Given that, how can the government reassure future international partners that the United Kingdom can be trusted to abide by the legal obligations of the agreements it signs?”

This followed an extraordinary acknowledgement from Lewis, answering an emergency question from another MP from his own Conservative Party, that the British Government was indeed preparing to break the law. Lewis declared: “I would say to my honourable friend that, yes, this does break international law in a very specific and limited way. We are taking the power to disapply the EU law concept of direct effect required by Article 4 (of the Withdrawal Agreement) in certain, very tightly defined circumstances.”

Johnson’s own thoughts on the matter are keenly awaited, not least since a headline in the pro-Brexit Daily Telegraph on September 8 proclaimed: “Brexit deal never made sense, PM to tell EU.” This prompted an immediate rejoinder from an ardent supporter of remaining in the EU, former Labour cabinet minister Hilary Benn: “If he is now saying, well ‘it doesn’t make sense’…he should have read it before he put his name to it.”

In ordinary times, it would be reasonable to expect that matters would become much clearer on September 9, when the text of the new bill is due to be published and when Johnson himself will have to address parliament—and face another round of tough scrutiny during parliamentary questions from the Leader of the Opposition, Labour Party Leader Keir Starmer.

But these are not ordinary times, and it may well be true that no one will really know how serious the threat to Irish security truly is until the United Kingdom and EU conclude their trade agreement negotiations. Will October 15, 2020 prove to be a real deadline for a trade deal, or just another staging post on Britain’s uncertain march to a post-Brexit future?

Image: Prime Minister Boris Johnson returns to 10 Downing Street, after a Cabinet meeting at the Foreign and Commonwealth Office (FCO) in London. (Via REUTERS)