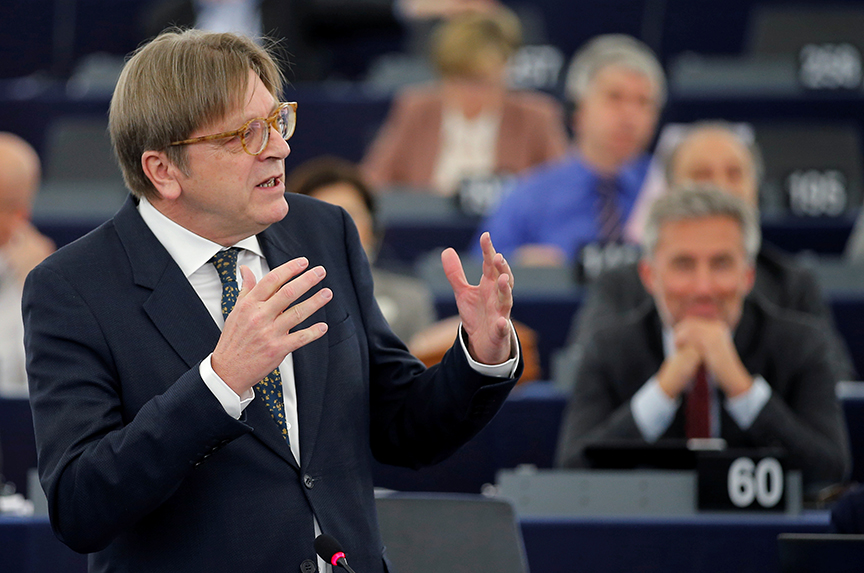 One might have hoped that the United Kingdom’s security relationship with Europe could be kept out of the Brexit negotiations, which will be difficult enough without an added layer of political complexity. Alas, just a week after the UK fired the starting gun on its departure from the European Union, it is already clear that this won’t be the case. The security relationship has already been politicized by Brexit, and it is largely London’s fault.

In British Prime Minister Theresa May’s letter formally activating the EU exit process on March 29, she suggested that if an agreement couldn’t be reached between the UK and the EU-27, “cooperation in the fight against crime and terrorism would be weakened.” This did not go over well in Europe. The Brexit negotiator for the European Parliament, Guy Verhofstadt, warned May against haggling with the UK’s military assets, and the European Parliament subsequently published guidelines stating, explicitly, that tradeoffs between security and economics will not be acceptable.

There are very good reasons to keep defense and security separate from the Brexit negotiations. Security did not feature in the Brexit referendum campaign, and most UK defense efforts take place outside the EU. Both sides have an interest in continuing with close defense and security cooperation after the UK leaves the EU. The UK is one of Europe’s top defense powers, alongside France, with deployable armed forces, security and defense expertise, world-class intelligence services, and a nuclear deterrent.

Continental politicians and experts in London have warned against using this so-called security surplus as a bargaining chip in the Brexit negotiations. Malcolm Chalmers, deputy director-general of the Royal United Services Institute (RUSI) in London, has argued it could imply that the UK’s commitment to collective defense depends on Brexit terms rather than on shared values. It would undermine mutual confidence, the foundation of collective defense. It would also suggest a turn towards isolationism rather than towards a Global Britain.

Unfortunately, whether she meant to or not, May has already injected the subject into the political equation. Despite British protestations that she was simply stating the facts and not negotiating, or that the comment was for a domestic audience, it will now be very difficult to put the genie back into the bottle. Even if defense and security are kept out of the actual negotiations, they will not be immune from Brexit politics in the months ahead.

The British recently deployed nearly 1,000 troops to Estonia and Poland as part of NATO’s Enhanced Forward Presence. Most reported it as a demonstration of an ongoing British commitment to European security—it’s the largest deployment to Europe in decades—but the deployment is not without Brexit-related political challenges. Charles Grant, director of the Center for European Reform, pointed out that a few UK government officials suggested that in return, those EU states should “go the extra mile” to give the UK a generous Brexit deal. This left Baltic and Polish officials “miffed,” as they thought the UK genuinely cared about their security. Russia, too, is trying to discredit the deployment by spinning it as “aggression,” by propagating the narrative that the UK is not welcome in the Baltics, and that a Brexiting Britain isn’t truly committed anyway.

London’s relations with Washington add another layer of political complexity to security cooperation. US President Donald J. Trump supports Brexit. He has shown a disdainful lack of interest in the EU and has suggested the possibility of striking deals with Russian President Vladimir Putin. Uncertainty about the US commitment to Europe under Trump has already transformed the European security landscape. As May distances herself from the EU, she needs to keep good relations with Trump for political and strategic reasons. But she must be careful not to let the traditionally “Atlanticist” UK drift too far into America’s orbit on security issues, creating a split with her most important “Europeanist” partners in the EU—France and Germany.

If May is to fulfill her avowed objective of maintaining close military and security links with Europe as part of a post-Brexit partnership, she must show unwavering British commitment in her words and in her actions. She must make it clear—to Europe, the United States, Russia, and to the backbenchers in her own Conservative Party—that the British commitment to European defense is not on the table for negotiation because it sits on a foundation of mutual trust and shared values. By allowing the UK’s defense assets to be politicized, she risks looking cynical and insincere, and undermining the security order that has served Europe so well.

Lisa Aronsson is a visiting fellow at the Atlantic Council’s Brent Scowcroft Center on International Security. You can follow her on Twitter @Lisaaronsson.

Image: “We always assumed America would be there for us, no matter what. Not with Donald Trump, it isn’t. For the first time in history there is a US president who is rooting for the breakup of the European Union,” Guy Verhofstadt, the European Parliament’s chief Brexit negotiator, said in an e-mail interview with the New Atlanticist. (Reuters/Christian Hartmann)