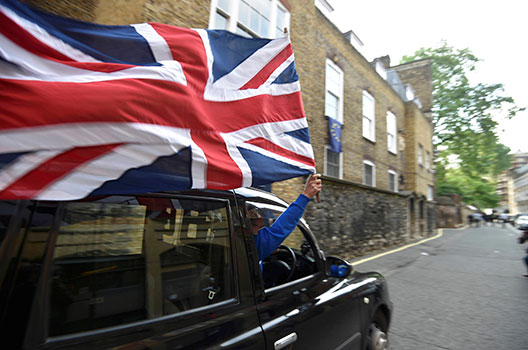 A taxi driver holds a Union flag, as he celebrates following the result of the EU referendum, in central London, Britain June 24, 2016. (REUTERS/Toby Melville)

The United Kingdom’s vote to leave the European Union will provide a massive boost to the isolationist, anti-immigrant, and eurosceptic policies of Europe’s far-right political parties.

Marine Le Pen, leader of France’s National Front, said that she was proud of the British people for making the “right choice” and resisting international pressure to remain in the European bloc. Geert Wilders, head of the Dutch far-right People’s Party, has repeatedly called for a leave referendum in the Netherlands—as have the Sweden Democrats, the Alternative for Germany (AfD), and Italy’s Northern League.

In the eyes of these parties and their leaders, the United Kingdom’s decision to leave the EU, despite the extremely negative economic consequences associated with doing so, was a test of the United Kingdom’s own political agenda and future in European politics. The referendum results proved that they have hit the right nerve: growing disenchantment with the EU and anxiety about immigration and terrorism at home is pushing Europeans to turn inward.

In the broad context of European politics, the so-called Brexit is just one of many crises that symbolizes the continent’s turn toward isolationism and distrust of increasing economic interdependence. Far-right parties in Western and Eastern Europe have been rallying behind eurosceptic sentiment since the economic crisis plunged Southern Europe into recession and fed anti-EU resentment in more wealthy countries—primarily Germany—whose citizens didn’t want to see their tax dollars going to bailing out Greece or Portugal.

From its inception, the EU was a project driven by elites—rapidly pushed through by center-left and center-right parties since the end of World War II. What began as an economic project based on a common market quickly grew into something much more: a political entity with open borders. The rapid expansion of EU borders to include the post-socialist states produced unprecedented economic prosperity for the continent. However, once the era of growth gave way to stagnation, the benefits of the EU became less clear to those who felt left behind in the process. Since the financial crisis and the ongoing migrant crisis, the number of those feeling left behind by Brussels’ agenda has only increased. It is these very individuals who will be going to the polls to support the likes of Le Pen and UK Independence Party leader Nigel Farage in the next elections.

Brexit was not just a vote on the United Kingdom’s future, it was a referendum on Europe’s elite and centrist parties. In the face of shortsighted populism and nativism, the elite have failed.

Alina Polyakova is the deputy director of the Atlantic Council’s Dinu Patriciu Eurasia Center and author of “The Dark Side of European Integration”.