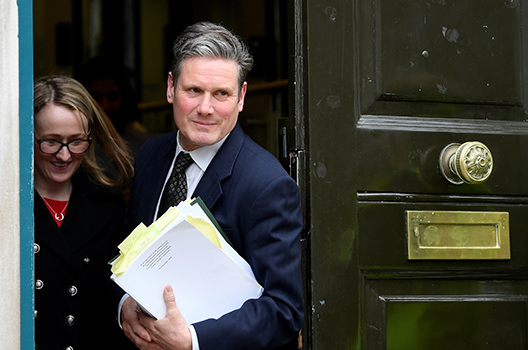 Britain’s political structures are falling apart and, ironically, nothing illustrates this better than the fact that the leaders of its two biggest political parties are supposedly seeking to cooperate to deliver something that they once campaigned to oppose: Britain’s withdrawal from the European Union.

Prime Minister Theresa May leads a Conservative Party whose members of parliament overwhelmingly oppose any Brexit deal she might be able to strike with opposition Labour Party leader Jeremy Corbyn. As for Corbyn, while most of his MPs might just support a May-Corbyn Brexit deal if it guaranteed continued membership of a customs union with the EU, a rump element remains fiercely opposed to any such outcome.

And in the background are splits within both parties concerning the idea of a second referendum that would let the UK electorate determine the outcome of Britain’s three-year long attempt to leave the European Union.

Curiously, while it is not possible to calculate just what will be the immediate outcome of the current Brexit imbroglio, it is already possible to gauge some of the longer-term consequences.

The first is the revival of the power of Parliament to impose its will on a minority government, and particularly on a supposedly ruling party in which the toughest challenges to its most important policy have come from within its own ranks.

This manifested itself on April 3 when the House of Commons approved, by just a single vote, a highly unusual bill that calls for an extension to the Brexit negotiating process with the European Commission and ensures that it is Parliament, not the Government, that has the ultimate right to determine just how long such an extension should last. This bill, which the Government fiercely opposed, has still to pass Britain’s upper house, the House of Lords, but its passage there should be assured.

The second is that both the main political parties are so deeply split that whatever Brexit outcome finally emerges will force major changes in party policy that will likely result in major quits and resignations amongst both MPs and, more importantly, party members and voters. Under almost all circumstances, the Conservative Party will be steadily taken over by a wing of the party that really does want to have as little to do with the EU as possible.

What the party’s ‘Remainer’ faction will do is far from clear. Since it includes many of its most experienced MPs, including a number of current and former government ministers, it is quite conceivable that they will simply retire from active party politics rather than constituting a pro-European faction in their own party or quitting altogether to join other parliamentary groupings, such as the new Independent Group.

In Labour, much depends on the outcome of the May-Corbyn process. Corbyn is insisting that the UK should remain in a customs union with the EU, and he has broad support from his own MPs for this approach. But there is also broad support amongst Labour MPs for a confirmatory referendum on any Brexit agreement to which Labour might accede, and on this Corbyn is far more ambiguous. On the one hand, his party chairman, Ian Lavery, is ferociously against such an idea, reflecting the view of perhaps twenty or so MPs representing seats whose populations voted “Leave” in the 2016 referendum. On the other, Labour’s foreign affairs spokesman, Emily Thornberry, wrote to Labour MPs on April 3 saying that Corbyn should not conclude a deal with May unless it included a new referendum.

Perhaps reflecting the fact that Labour’s party members, supporters, and voters overwhelmingly support staying in the European Union, Thornberry used some very blunt phrasing: “Yes, any deal agreed by Parliament must be subject to a confirmatory public vote, and yes, the other option on the ballot must be Remain.” What’s more, at least one senior ‘Remainer’ in May’s cabinet, Chancellor of the Exchequer (Finance Minister) Philip Hammond, has broken cover to declare publicly that a referendum is a credible option.

The third is that by initially holding a referendum, and then squabbling over how to interpret the pro-Brexit victory in that referendum, politicians in general have lost ground. The 2016 popular vote to leave the EU was, in great part, a reflection by the disadvantaged of a division in the UK that has seen some regions prosper greatly in the last thirty years or so while others have seen little or no improvement in their standards.

Those ‘left behind’ were more persuaded by the emotional argument that it was time for Britain to ‘take back control’ over its own affairs than by the Remainers’ calculations that Brexit would diminish Britain’s economic prospects with a knock-on impact on household living standards.

And even though it is quite possible that the balance of opinion in the UK has changed, so that a second referendum could quite conceivably result in a call for Britain to remain within the EU, it’s reasonable to expect that the ‘Leave’ losers this time would feel twice as aggrieved as the ‘Remain’ losers three years ago. In effect, frustration over being ‘left behind’ for so long would be compounded by the fact then when they did a find a way to raise their voice in 2016, three years later, the British establishment somehow found a way to ignore them.

This would not necessarily reflect the reality of the tortured debates both between and within Britain’s political parties as to how they should respond to the 2016 referendum result and the ongoing debate concerning any post-Brexit relationship with the EU, but that’s not the point. What counts is the sense of betrayal so many voters would feel if Britain remained in the EU.

The first indication of the scale of any such backlash could come as early as May 23, since that is the date set for the next European parliamentary elections. Right now, it looks increasingly likely that a prolongation of Britain’s three-year effort to leave the EU will indeed result in the UK being forced to take part in this poll. And the election will be conducted on a proportional representation and list basis, which – unlike the first-past-the-post system used in British general elections – favors parties with tightly-focused or extreme views.

There has been and will continue to be considerable speculation that May might seek to resolve the impasse by holding a general election. But at a time when the splits in the Conservatives appear to run deeper than those in Labour, such a development cannot be taken for granted. Moreover, the Conservative Party is currently very low on funds for fighting an election and, as a result of the Brexit tumult, it can no longer expect to receive as much cash from business as it usually does.

So Britain and its political parties stumble on towards an unknown destination. The next few days should bring some clarity, not least concerning whether May and Corbyn will find it possible to achieve at least a minimum of cooperation. But the future of Britain’s membership of the European Union may yet come back to the people for a final decision. And, given the tumult in the political parties and popular frustration with how politicians have addressed the issue, who really knows just what they will decide?