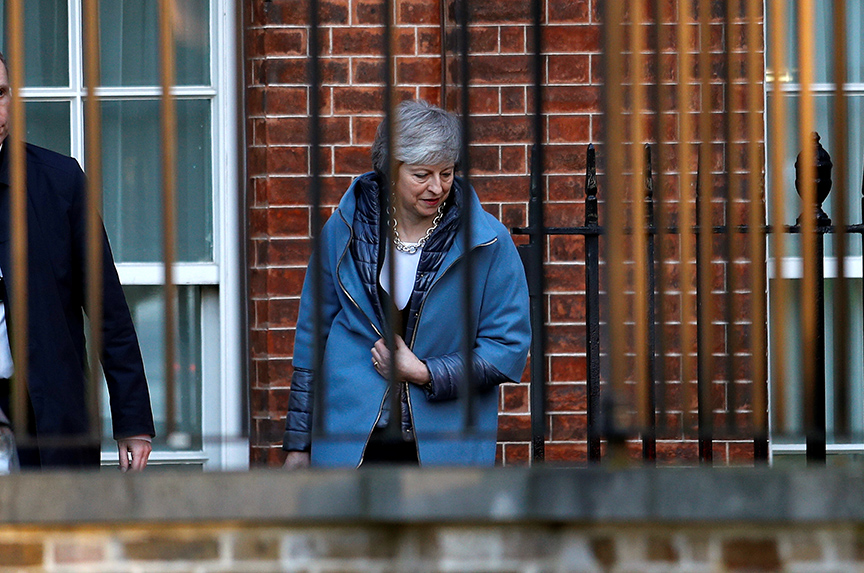 British Prime Minister Theresa May is seen outside her official residence at No. 10 Downing Street in London on February 14. (Reuters/Peter Nicholls)

I never wanted to bang on about Europe. However, as a special adviser to British Prime Ministers David Cameron and Theresa May, I managed to spend much of the past three and half years doing just that.

One of my roles in that time was to brief ministers going on TV or radio on the latest issues in the news that day. Following the daily ins-and-outs of Brexit could be both time-consuming and frustrating. But beyond the day-to-day details, there are some fundamentals that underpin the whole process.

This is my effort to draw them out.

Split the destination from the road

There are only three possible end destinations: no deal, no Brexit, or a deal. Any deal will look quite a lot like the deal on the table.

Everything else—votes in Parliament, extending Article 50, even a general election or second referendum—are simply part of the journey to one of those destinations.

Be wary of those offering process points as end goals (for example, the second referendum supporters who can’t even agree what the questions would be).

The ‘no majority for anything’ problem

Following the 2017 election, there is a majority in Parliament against lots of things, but currently for nothing.

The government won the confidence vote after the loss of the meaningful vote in January. But it lacks confidence for any specific course of action. That’s because the government has in effect two confidence and supply agreements: one with the Democratic Unionist Party (DUP), and one with the pro-Brexit European Research Group faction within the Conservative Party.

These will be maintained as long as Brexit is kept on track, but aren’t much use in getting to a deal.

The UK government is rightly seeking changes to the backstop to address MPs’ concerns. These efforts may see some success. The European Union (EU) should reflect on the fact that the current form of the backstop is making the very outcome it seeks to prevent (a hard border between Northern Ireland and the Republic of Ireland) more, not less, likely.

But the big choices facing MPs are the same now as they were months ago—and they aren’t going to change.

This is because of the judgment that a close relationship on goods is the only way of dealing with the Northern Ireland border, as well as the economic reality that employers in the UK are accustomed to frictionless trade with the EU. Any harsh change to that will cost jobs and tax revenues that could be spent on schools and hospitals.

This decision trades theoretical freedom of divergence, for maintaining some of the benefits of EU membership. If a withdrawal agreement is passed, the terms of this trade-off will continue to dominate the details of the future trading relationship.

Accidental no deal is possible

In domestic and international law, the UK will leave the EU on March 29. Every day that passes without something being agreed makes no deal more likely.

In theory, there is no majority in Parliament—or really the government—for leaving without a deal. But they need to get their act together to agree something, or the UK faces no deal by accident.

Crucial to how this plays out are the anti-no-dealers within the Cabinet and government, and how late they think they can leave it before acting.

Both Labour and Conservative front benches want to leave with a deal. Compared with the risk of no deal or no Brexit, the differences between the deal they want are not that great.

MPs on both sides are going to face the choice of whether they put greater weight on the small differences between types of deal, or the greater risk of no deal.

The Brexit process is nowhere near an end

There is understandable focus on March 29 and whether a deal is passed or not. The public—as well as those working on Brexit—want resolution. Sadly for everyone, that remains a long way off.

After that, the detailed negotiations on the future relationship will start. This will take years, and the government will face all the same problems of a deeply divided Parliament it does now. (This is why a general election before 2022 is possible).

Even when a new relationship is in place, there will be a period of adjustment for the UK to manage the changes this brings.

Immigration dominated the referendum campaign—and continues to be a massive concern to the public.

However, it has taken up a surprisingly small part of the post-referendum debate. That’s partly because ending free movement has been at the heart of the government’s negotiating position. Any backsliding on this is politically toxic.

The details of the labor mobility framework in the future relationship will be controversial. But ending free movement and allowing more nuanced immigration debate and policy is one of the great prizes of Brexit.

Putting it all together

The first meaningful vote was lost by 230 votes. Getting a withdrawal agreement passed requires moving a lot of votes. But with some changes to the deal, and faced with the other options, I still believe a majority in Parliament will do the responsible thing and back a deal.

Frustratingly for everyone else, it will be very late in the day if it does all come together. And even then, the Brexit process won’t be close to an end.

Richard Chew served as a special adviser to British Prime Ministers David Cameron and Theresa May between 2015 and 2019. Follow him on Twitter @ChewRJ.