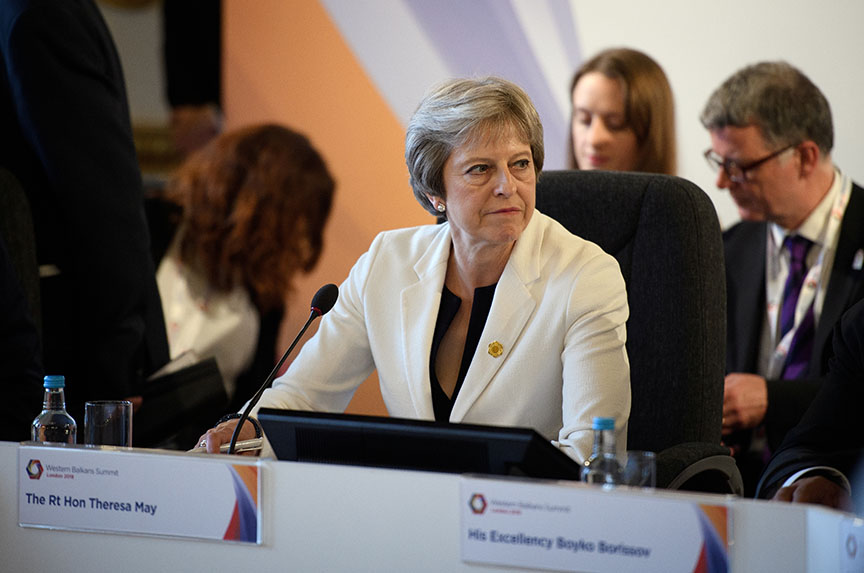 The illusion that British Prime Minister Theresa May’s Conservative government had come up with something resembling a workable Brexit plan after months of uncertainty over the United Kingdom’s decision to leave the European Union (EU) lasted little more than two days.

On July 6, it appeared May had won support of her cabinet for some much-needed clarity on the British government’s Brexit approach. For a moment, even the most ardent Brexiteers seemed to fall in line with her softer Brexit plan.

By July 9, that hint of clarity had been blown away by a rebellion within her cabinet. Brexit Secretary David Davis and Foreign Secretary Boris Johnson, two senior cabinet members, May critics, and hardliners in negotiations with the EU, had resigned, leaving the future of the cabinet and the Brexit talks hanging in the balance.

Will May face a no-confidence vote?

An immediate vote of confidence—either within the Conservative Party or the House of Commons—seems unlikely for now. May faced down internal critics in a July 9 meeting with the so-called 1922 Committee, a caucus of Tory backbench members of Parliament, including the most vocal Brexit hardliners. Under party rules, the committee can trigger a leadership challenge if 15 percent of Conservative MPs, currently forty-eight members, request such a motion.

Reportedly, May’s reminder to the group that similar Conservative divisions led to the party’s resounding defeat in the 1997 election seems to have fended off a challenge for now. Just as likely though, those wanting to challenge May have no clear path yet to the 159 Tory votes needed to win such a motion. The lack of clear successor also works in May’s favor for the moment. And even her strongest Tory opponents will not want to call a no-confidence vote in the House of Commons, force an early election, and risk left-wing Labour Party leader Jeremy Corbin becoming prime minister as a result.

But the threat will hang over the prime minister now more than ever, limiting her political capital and room to maneuver. And the politics within the Conservative Party are likely to reach new levels of fractiousness and strife. Johnson and—to a lesser degree—Davis will remain a thorn in May’s side, now that they are unrestrained from cabinet discipline, able to resume open leadership of the Brexiteer faction, and liberated from the burden of providing constructive proposals toward progress in the Brexit negotiations.

What triggered the resignations of Davis and Johnson?

In an all-day cabinet meeting at her country residence, Chequers, on July 6, May had forced through provisional agreement on a softer approach to Brexit. This approach outlined some general elements of the British government’s proposal for the post-Brexit EU-UK relationship. These included harmonized rules for the free trade in goods between the United Kingdom and the EU, a so-called facilitated customs arrangement that would avoid hard borders, and a framework for joint jurisdiction over disputes.

Both Davis and Johnson said they could not support this new Brexit strategy, criticizing the plan for giving up British leverage and falling short of a real Brexit. Both had previously clashed with May over the United Kingdom’s negotiating approach. In his hyperbolic resignation letter, Johnson argued that the Brexit “dream was dying” and Britain was “headed for the status of a colony” under the new approach.

How will all of this impact negotiations for a post-Brexit deal?

For the substance of the talks, the change is personnel will have little impact. Neither Johnson nor Davis took great interest in technical deliberations. Instead, Number 10 Downing Street and May’s EU Sherpa, Olly Robbins, have been the European Commission’s real interlocutors in recent negotiations.

But May’s domestic political problems will further call into question her ability to deliver any future deal, both on the unfinished withdrawal treaty and on the post-Brexit EU-UK relationship. Time is running out for both sides to agree the details of the exit arrangements, including provisions for the border between the Republic of Ireland and Northern Ireland, before March 29, 2019. On that day, the United Kingdom will officially leave the EU and enter a transition period under a withdrawal agreement yet to be finalized. Politically, such an agreement will have to be concluded well before the end of the year for the European Parliament to approve it ahead of the May 2019 European elections.

A British government in crisis, led by a wounded prime minister facing the threat of a no-confidence motion from Brexit hardliners will find it a lot harder to forge the consensus needed on complex substantive questions. Heightened internal divisions will make this even more challenging now, especially when it comes to contentious and intricate issues of the United Kingdom’s future economic relationship with the EU, the extent of free movement with the Continent, or the application of EU law.

Are May’s new Brexit proposals a game changer for the negotiations?

Even if May emerges from the current crisis with the backing of her party for the Chequers proposals, the key elements are unlikely to meet with support in Brussels. EU officials have been careful not to discount the ideas outright and said they are waiting for more details in a white paper expected later this week. But off the record, many still see the overall vision as a British attempt to cherry-pick the key benefits of the EU’s single market. Others said the new customs framework that would avoid hard borders and have the United Kingdom collect EU duties for incoming goods was simply a recycled version of a proposal the EU rejected almost a year ago as  unrealistic.

What to look for next

May will focus on shoring up her cabinet’s stability in the days and weeks ahead. The effort may face continued challenges in the form of either significant pushback from EU negotiators on the British proposals, Johnson’s pursuit of political relevance, or both.

Bart Oosterveld is the C. Boyden Gray fellow on Global Finance and Growth and the director of the Global Business and Economics Program at the Atlantic Council.

Image: British Prime Minister Theresa May led a plenary session during the Western Balkans Summit 2018 at Lancaster House in London on July 10. (Leon Neal/Pool via Reuters)