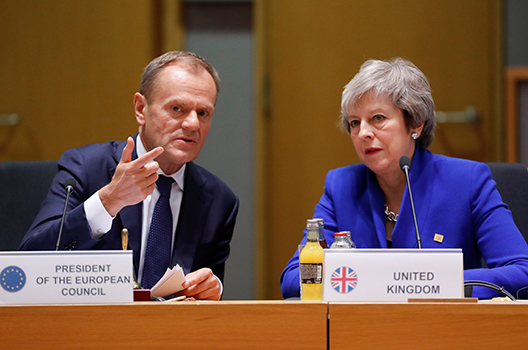 At an extraordinary summit on November 25, European Union leaders approved a draft agreement with British Prime Minister Theresa May setting out the terms of the United Kingdom’s withdrawal from the EU.

It is hard to understate the importance of this milestone in the Brexit process. The 585-page draft agreement comprehensively dictates the terms of the UK’s exit from the EU on a broad range of issues, from the UK’s financial obligations toward the EU, the Northern Ireland border regime, citizens’ rights, jurisdiction delimitation, and financial services regulation among others.

Crucially, it establishes a transition period up to 2022 until a future permanent relationship can be concluded in a separate negotiation not yet started. It even anticipates a “backstop” or back up plan by which the UK would remain inside the EU’s custom union in case a future long-term deal is not reached. Leaders already issued a vague political declaration on November 25  laying out the guiding principles for such future relationship negotiations, which should enter into high gear after and if the deal is ratified by the British and European Parliaments.

The draft agreement follows long, tortuous negotiations. The decision to leave the EU was narrowly backed by almost 52 percent of British voters in a June 2016 referendum. Since then, UK politics have been roiled by upheavals: the resignation of then Prime Minister David Cameron, general elections, several Cabinet reshuffles, and lurches in the UK’s overall negotiating strategies and objectives. Simultaneously, uncertainty has stymied the economy since then, even if a formal exit—legally set for March 29, 2019—has not yet taken place.

Yet for all recent progress, the turbulence is anything but over. Indeed, the EU summit’s mood was rather gloomy, signaling the many hurdles ahead that could still derail an orderly exit.

The bumpy road ahead

European leaders endorsed the withdrawal deal on November 25, but to enter into force, the agreement will require formal ratification by both parties before March 29 of next year. Failure to do so would entail a “no-deal” Brexit—a highly disruptive scenario with profound economic impact and uncertain political consequences.

From the EU’s side, ratification appears relatively straightforward. The deal will need to be ratified by the European Parliament, requiring a simple majority vote out of a total of 751 seats. Given its current composition, Parliament approval seems certain.

Additionally, the European Council, the intergovernmental body that represents the will of member states, will need to approve the deal with at least twenty countries voting in favor and representing at least 65 percent of the EU’s 500 million citizens. Until now, EU member states have presented a unified front during the negotiations, but recently cracks have begun to appear. Notably, France has voiced concerns over the deal not granting adequate fishing rights for its fleet, while Spain has demanded assurances regarding the status of UK-controlled Gibraltar. These declarations should be seen as late-stage positioning mostly geared for domestic consumption. They do not pose any serious risk to ultimate Council ratification. Since the alternative to not ratifying is a much worse no-deal scenario, no individual EU member will risk sabotaging the deal because of minor grievances.

The real danger of derailment comes from the UK.

The first step in the UK’s ratification process will be a vote by the House of Commons on December 11. At the moment, there is no clear majority of members of Parliament (MPs) supporting May’s deal. Her own conservative MPs hold a slim majority, propped up by ten seats from Northern Ireland’s Democratic Unionist Party (DUP). DUP leaders have expressed their intent to strike down the deal as they oppose any regulatory divergence between Northern Ireland and the rest of the UK, which the deal backstop contemplates. Adding to May’s problems is the Eurosceptic wing of her own party, rallied by the European Research Group (ERG). ERG members—around twenty to fifty MPs—are expected to vote against the deal, citing the UK being part of the customs union as part of the backstop plan. This would limit the UK’s ability to independently negotiate free trade agreements on goods with third countries, a major Brexit selling point for staunch Brexiteers such as ERG leader Jacob Rees-Mogg.

In opposition, the Labour Party will vote against the deal on the grounds that it will not deliver the same benefits as current EU membership. The Scottish National Party, the Liberal Democrats, and even a handful of rebel pro-Europe conservative MPs will also oppose the deal, as they claim that the Brexit decision is still reversible.

Under the circumstances outlined above, the deal may very well be voted down. Even when accounting for a few Labour MPs expected to swing in favor of the deal, it is unclear if they could add enough votes to tip the balance in May’s favor. If the vote indeed fails, the uncertainty would be enormous.

The government would then have twenty-one days to patch a new agreement with the EU and submit it again for a vote. Even if May manages to obtain fresh concessions from the EU in time, the chances of a repeated failed vote in the House of Commons would be high. Ultimately this could lead to a disruptive no-deal situation as a third vote attempt would be impossible before March 29. The UK would then abruptly leave and future trade relations would fall under World Trade Organization (WTO) rules.

No deal and general elections

Facing the cliff edge of no deal, general elections could be on the table. Hypothetically they would lead to a different parliamentary arithmetic that could allow a deal to pass. Under the current climate, this would represent a high-risk maneuver. What’s more, May seems unlikely to opt for this given that her similar gamble failed to grant her a “strong and stable” majority in the 2017 elections.

Not all is lost for May. Opposition is united against her plan but for diametrically opposed reasons. Essentially, neither pro-EU nor Brexiteer forces can muster an alternative majority on their own. ERG Brexiteers have so far been unable to even launch a leadership contest within the Conservative Party, failing to reach the forty-eight MP letters required to trigger it.

On the other hand, Remainer forces are advocating for a second referendum, known as “people’s vote,” confident that this time around UK citizens would opt to stay in the EU. But nothing guarantees that would be the final outcome. At a minimum, a second referendum is bound to be as divisive as the first one, without providing a clear mandate or eliminating uncertainty. On top of that, there is virtually no time left to organize a referendum.

Thus, the current draft agreement may well be the lesser evil for most parties involved. As all other options are riskier or produce worse outcomes for most actors, a weak majority—but a majority nonetheless— could in the end hold their noses and approve the deal. At the current time, this seems the most likely scenario.

Successfully navigating these perilous waters would be an impressive feat for May. If she succeeds, she would have quelled internal opposition and boosted her mandate to negotiate the long-term EU-UK relationship after the UK officially leaves the EU on March 29, 2019.

Bart Oosterveld is the director of the Atlantic Council’s Global Business and Economics Program.

Alvaro Morales Salto-Weis is a program assistant in the Atlantic Council’s Global Business and Economics Program. Follow him on Twitter @alvarosaltoweis.