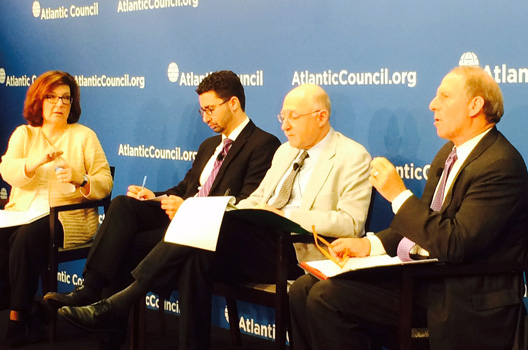 Many of the United States’ Gulf allies are anxious about Iran’s activities in part because of the high levels of mistrust in their own relationships with Washington, the Atlantic Council’s Bilal Y. Saab said July 7.

“The bottom line of it all is it is not just what Iran is doing, it is just the fact that they are so concerned about the current state and the future of the relationship with the United States. Had that been intact, had there been no concerns about that, I think that the partners would be far less concerned about what Iran is doing,” said Saab, a Resident Senior Fellow for Middle East security at the Atlantic Council’s Brent Scowcroft Center on International Security.

“It’s just that there is so much uncertainty in that relationship and even mistrust—there is no secret about that—that the Iran challenge as a whole is amplified,” he added.

Saab spoke at the launch of his report, “The New Containment: Changing America’s Approach to Middle East Security,” in which he makes the case that the United States must develop a comprehensive security strategy for the Middle East.

The so-called P5+1—the United States, Britain, France, China, and Russia plus Germany—is negotiating a deal with Iran that would limit the Islamic Republic’s nuclear program in return for phased sanctions relief. These negotiations, which are taking place in Vienna, were extended July 7 as officials grappled with some contentious issues.

A deal with Iran could pose a proliferation threat in the region as Saudi Arabia and some other Gulf states have said that they will seek similar nuclear enrichment capabilities that Iran is allowed to keep.

In the event of a nuclear deal with Iran, “one of the principal strategic tasks that will befall to the United States is managing what I would call the Arab countries’ desire to develop a nuclear option: to essentially hedge against what ten or fifteen years from now the Middle East would look like,” said Richard Haass, President of the Council on Foreign Relations.

“Managing that nuclear option would become one of the more time consuming and difficult challenges” facing future US administrations, he predicted.

Haass and Saab were part of a panel that also included Barry Posen, Director of the Security Studies Program at Massachusetts Institute of Technology, and was moderated by Barbara Starr, CNN’s Pentagon correspondent.

Describing a nuclear deal with Iran as “only one piece of the Middle East security puzzle,” Saab said the United States needs to have a comprehensive security strategy for the region.

A robust US containment strategy for the Middle East would be based on six pillars, said Saab. These are:

“The United States should try to at least help develop a new regional security architecture,” said Saab. “Whether you like it or not this thing is actually developing by itself, so the best thing we can do is try to shape it in ways that are in line with our own strategic interests.”

Such a strategy is not an effort to gang up on Iran, Saab asserted. “This is a real, genuine opportunity to actually create something that is owned by the regional stakeholders.”

“This is in no way an isolationist strategy. The United States will still be heavily committed, but in a very different way than it has been thus far,” he added.

Claims about the growing challenge Iran poses in its neighborhood, particularly through proxy groups, are overstated, said Posen.

“Iran is stuck having, in some sense, to back the weaker parties,” said Posen.

“My guess is that if you could get people in the [Obama] administration in a quiet room where there were no reporters present they would admit that they are not that exercised about this problem. The reason they have to talk about it now is because allies in the region have made such a big deal about it and they’re trying to use it in a way to kill this arms control agreement,” he said. “I just don’t think it’s that big a deal.”

Haass contended that there are bigger problems than Iran in the region, including the Islamic State of Iraq and al-Sham (ISIS), a terrorist group that has spread from Iraq and Syria to other parts of the Middle East and North Africa.

“I am more concerned about the threat that ISIS poses than the geopolitical threat posed by Iran,” said Haass.

He said Saudi Arabia, in particular, must pay greater attention to the challenge ISIS poses to the Sunni kingdom.

All three panelists agreed that ISIS has not, as yet, set its sights on the United States.

“At least for now, [ISIS’] ambitions to engage in terrorism beyond the region seem to be low,” said Posen. “That said, I think there is an argument to be made that the ideological ingredients for them changing their views at some time are there.”