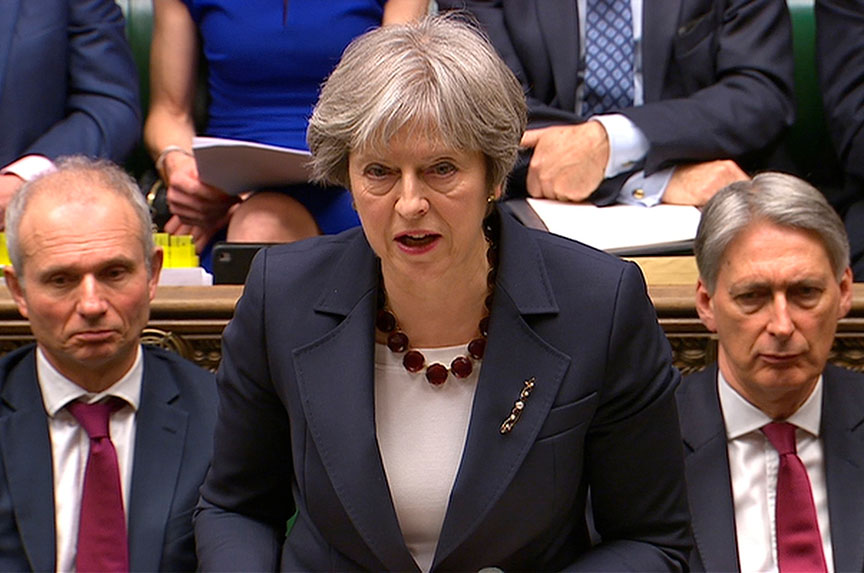 British Prime Minister Theresa May on March 14 expelled twenty-three Russian diplomats and suspended high-level contacts with Moscow after blaming Russia for poisoning a former Russian spy and his daughter in the United Kingdom. The expulsion, which May described as the largest in more than thirty years, will add further strain to an already tense relationship between London and Moscow.

But is that an adequate response to ongoing Russian belligerence?

Brian O’Toole, a nonresident senior fellow in the Atlantic Council’s Global Economics and Business Program, said May’s decision “is a middle-of-the-road action that is unlikely to satisfy those who believe Russia should be called to task.”

“Unless it is followed by joint action with the United States, this diplomatic action would not seem to provide a real deterrent to an ever-aggressive Putin regime,” he added, referring to Russian President Vladimir Putin.

[Update: US President Donald J. Trump, German Chancellor Angela Merkel, French President Emmanuel Macron, and May on March 15 issued a rare joint statement in which they said “there is no plausible alternative explanation” to Russian responsibility in the poisoning of the former Russian spy and his daughter.

“It is an assault on UK sovereignty and any such use by a state party is a clear violation of the Chemical Weapons Convention and a breach of international law. It threatens the security of us all,” they added.]

John E. Herbst, director of the Atlantic Council’s Eurasia Center, said the Kremlin will “breathe a sigh of relief” if the British response to the poisoning is limited to expelling just twenty-three Russian diplomats.

“The expulsion of this number of diplomats is a suitable response to spying. It is a suitable way to express unhappiness with a country over any number of policies,” said Herbst. But, he added, “it is a weak response to attempted murder via exotic methods and not for the first time.”

Herbst suggested that a “more robust and appropriate expulsion would remove all of the Russian Embassy’s intelligence officers and reduce that embassy to a tiny staff that could be easily monitored.”

The British government could also limit or deny the access of select major Russian corporations and banks to Britain’s financial services, he said. “A ban on visas for senior Russian officials and their families would also be a strong response that plays to the UK’s strengths.”

Evelyn Farkas, a nonresident senior fellow in the Atlantic Council’s Future Europe Initiative, Eurasia Center, and Scowcroft Center for Strategy and Security, said “expelling Russians accredited to the embassy in London makes sense as they represent the government that attacked British sovereignty, residents, and citizens.”

Skripal, a former Russian military intelligence officer, served as a double agent for the United Kingdom’s intelligence services in the 1990s and early 2000s. In 2004, he was arrested in Russia, convicted of high treason, and thrown into prison. He won his freedom [and a life in Salisbury] as a result of spy swap. Today, Sergei and Yulia are in a fight for their lives.

At least some of the expelled Russian diplomats “likely directly or indirectly” supported the attempted assassination of Skripal, said Farkas. Noting more than a dozen other mysterious deaths of Russians in the United Kingdom, Farkas said these appear to be “Kremlin-directed assassinations.”

The United Kingdom has reopened investigations into fourteen mysterious deaths of Putin critics, including Russian tycoon Boris Berezovsky. A close friend of Berezovsky’s and a Putin critic, Nikolai Glushkov, was found dead under mysterious circumstances in his home in London on March 12.

In an address to the House of Commons, May said the attack on Skripal “represents an unlawful use of force by the Russian state against the United Kingdom.”

“It must therefore be met with a full and robust response,” the prime minister added.

O’Toole predicts that the expulsions will almost certainly be reciprocated by Moscow. “This tit-for-tat is reminiscent of the Cold War, which feels like a reference invoked far too often now with respect to Russia,” he said.

“Those who doubt Russia’s intentions toward the West might consider that this action exposes that one-third of Russia’s diplomatic presence in the UK were actually intelligence operatives under diplomatic cover,” he added.

Farkas contended that the expulsion of the Russian diplomats “should be an initial salvo.” She expects the British government to call for Article 4 consultations and perhaps even Article 5 action to defend itself and other affected NATO countries against such attacks by Russia. Under Article 4 of the North Atlantic Treaty, any member state can convene a meeting of NATO members to “consult” when it feels its independence or security are threatened. Article 5 of the treaty has at its core the principle of “collective defense,” whereby an attack on one member of the Alliance is treated as an attack on the entire Alliance.

Farkas encouraged the British government to work with the United States and European Union to increase existing sanctions against Russia for electoral and political meddling and military invasion.

“Clearly, the Kremlin remains undeterred from direct attacks on European and US sovereignty and on the international order,” said Farkas.

Mark Simakovsky, a nonresident senior fellow in the Eurasia Center, said the expulsion of the Russian diplomats was an “insufficient” step.

Noting that Putin’s opponents have for years been systematically targeted in the United Kingdom, Simakovsky said Britain, in partnership with its allies, needs to take “more systematic economic, political, and military efforts that can help prevent future Russian aggression on British soil.”

Skripal and his daughter, Yulia, were found unconscious on a park bench in the English city of Salisbury on March 4. British investigators suspect the two were poisoned using a military-grade nerve agent.

May then pointed the finger of blame firmly at Russia. It was “highly likely” that Russia was behind the attempted assassination, she declared.

Image: British Prime Minister Theresa May, in an address to the House of Commons in London on March 14, said the attempted assassination of a former Russian spy in Salisbury, England, on March 6 "represents an unlawful use of force by the Russian state against the United Kingdom." (Parliament TV handout via Reuters)