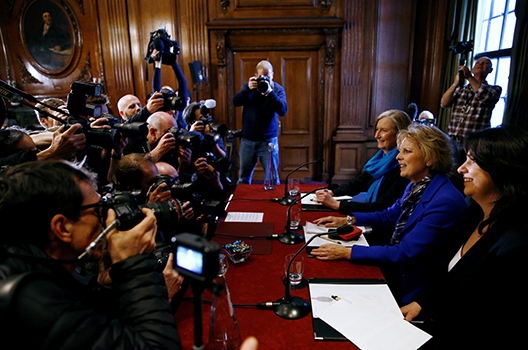 When British Prime Minister Theresa May and Leader of the Opposition Jeremy Corbyn faced off at prime minister’s questions on February 20, they were both diminished figures. May’s Conservative Party had just lost three of its members of Parliament (MPs) and Corbyn’s Labour Party eight.

It was the image of the eleven members of the new Independent Group sitting together in the House of Commons that captured the eye, and may, over the next few weeks, prove more important than the barbs exchanged by May and Corbyn.

All eleven are critics of their former parties’ policies on Brexit, mainly wanting to keep Britain within the European Union but arguing that the best way to sort out the current mess is by putting the issue to the people in a second referendum.

What unites them is a feeling that their parties are held hostage to extremists and what will determine their future is the reaction of their former parties to their departure. But while the Conservative defectors are at odds with the vast majority of their 314 former colleagues, the views of the Labour defectors are probably shared by a majority of Labour’s 247 MPs. It is the party leadership that the Labour defectors reject and, in particular, what they see as the leadership’s failure to tackle racism and anti-Semitism within the party.

The prime minister faces key votes on Brexit on February 27, with further votes likely before the scheduled date for British departure from the EU on March 29. Her strategy is simple: ensure that the bulk of her own party’s MPs, together with the ten members of the Democratic Unionist Party of Northern Ireland, vote pretty much in unison for the Withdrawal Agreement she negotiated in November and hope that any further rebellion by Conservative MPs who would have liked to see Britain remain in the EU is outweighed by Labour MPs representing constituencies that voted to leave.

The departures of Anna Soubry, Heidi Allen, and Sarah Wollaston from the Conservative Party do not yet destroy this arithmetic. But if they serve as an example for more MPs, and perhaps some government ministers, to follow suit, then May will face yet another defeat in Parliament, while leaving her with no time to change course. So that would mean at least a delay to Brexit and, quite possibly, no Brexit at all.

For Labour, the problem is just as bad, if not worse. The eight MPs who have so far left the party have received a host of messages from many of their former colleagues that express agreement with their general views; the principal difference being that at least for the moment, they intend to remain within the party to fight to get it back on track.

This was certainly the view of Labour’s deputy leader, Tom Watson. Commenting on February 18 on the departure of the first seven Labour MPs to quit, Watson said Labour must do more to tackle anti-Semitism if it is not to witness further defections. “This is a moment for regret and reflection,” Watson said. It was not the time “for a mood of anger or a tone of triumph.” And in a remarkable statement for a politician regarded as one of the party’s most astute tacticians, he concluded: “I love this party. But sometimes I no longer recognize it.”

For Labour, the question is whether the electorate feels the same. Instant polls—and these can prove wildly inaccurate—show that The Independent Group (TIG), as the eleven call themselves, already have the support of 14 percent of those polled.

This is a figure that is likely to rise and fall quite unpredictably, depending on whether or not more Labour and Conservative MPs break with their parties to join them.

What does appear to be beyond dispute, even at this early stage, is that the vast majority of their popular support comes at Labour’s expense. A Labour Party that was already struggling to keep on even terms with a Conservative government that has suffered defeat after defeat, faces the challenge that somehow it has to regain much of the center ground now occupied by TIG.

There is a modest prospect this might happen. Corbyn, who has persistently opposed the EU during his thirty-five-year parliamentary career and was the most reluctant supposed Remain supporter in the 2016 referendum on EU membership, might now put pragmatism ahead of extreme leftist ideology by coming out in strong public support of a fresh referendum. This would be favored by both the bulk of Labour MPs and overwhelmingly by party members, including those in constituencies that voted Leave. But, as far as anyone can tell, Corbyn’s strategy so far has simply been to see the Conservatives take responsibility for whatever Brexit debacle comes to be, and then utilize Conservative failures to win the next general election, whenever that might be.

The creation of TIG severely undermines Corbyn’s national strategy, just as it damages May’s parliamentary strategy. But what the outcome will be is beyond any rational thought at this stage.