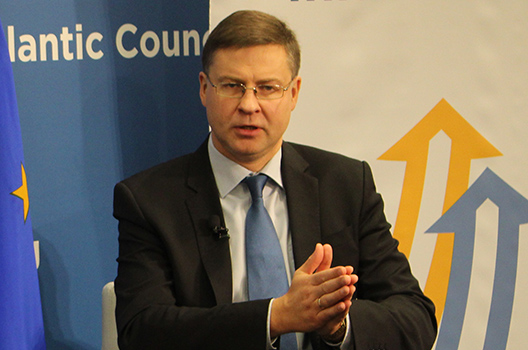 By agreeing to extend the deadline for the United Kingdom’s withdrawal from the European Union (EU) to October 31, EU leaders and British Prime Minister Theresa May “managed to avoid the most disruptive [potential] scenario, which would have been no-deal Brexit,” top European Commission official Valdis Dombrovskis said at the Atlantic Council in Washington on April 12.

The extension, which would first be reviewed by the EU on June 30 but could last as long as October 31, would give the UK Parliament time to “reflect and work on what is really their preferred scenario,” Dombrovskis said.

Although the UK agreed to a Withdrawal Agreement with the EU last December, the pact has failed multiple parliamentary votes in London, while lawmakers also continue to fail to find an alternative way forward, in a “tragicomedy to which we are all binge watching,” according to Atlantic Council Nonresident Senior Fellow Alexis Crow. May and Leader of the Opposition Jeremy Corbyn remain in negotiations over a potential cross-party solution to the deadlock, but a formal proposal has yet to emerge.

Dombrovskis, who serves as the European Commission’s vice president for the Euro and social dialogue, financial stability, financial services, and the capital markets union, repeated Brussels’ insistence that the “EU is not reopening negotiations on the Withdrawal Agreement.”

Speaking at an Atlantic Council event on Brexit and the EU, he did signal that the EU would be open to a compromise that passed the Withdrawal Agreement but changed the political declaration to outline a specific way forward on the UK’s relationship with the bloc, such as a customs union or comprehensive free trade agreement.

While the UK Parliament struggles to come up with a way forward, Dombrovskis cautioned that “it is not our task to see the roadmap in the UK Parliament,” but rather that Westminster must decide what it wants for itself. “We remain open to different options,” he said, adding that “of course both sides want to avoid no-deal Brexit and that is what the extension hoped to achieve.”

Although the extension releases some of the pressure, Dombrovskis warned that so far no potential scenario is “excluded, from no-deal to no Brexit.” He reported that his team has already had discussions with British banking and treasury officials to prepare “contingency measures for the case of no-deal Brexit.” Even in the event of no-deal, Dombrovskis hoped that the EU and the UK would be able to eventually harmonize enough of their regulations to allow both sides to make equivalence determinations on each other’s products, allowing them to be more easily sold and distributed between each other. “Of course,” he admitted, this would mean “that the UK regulatory framework and supervisory practices have to stay close to the EU regulatory framework and produce equivalent outcomes because only then can we house these equivalence determinations.”

Relations with the United States

Dombrovskis hailed the EU member states’ decision on April 11 to give clearance for EU officials to start formal trade talks with the United States. Trade tensions with Washington have been persistent since the Trump administration slapped tariffs on steel and aluminum from several partners, including the EU, on May 31, 2018. Dombrovskis explained that Brussels so far has “managed to avoid further escalation,” in the trade conflict after European Commission President Jean-Claude Juncker met with US President Donald J. Trump in Washington last July and agreed to start comprehensive trade talks.

Despite the prospect of formal talks, the United States is reportedly considering new tariffs on about $11 billion of EU goods in retaliation for supposed unfair European support for aerospace company Airbus.

Dombrovskis did concede that “President Trump’s unilateral trade policy and tendency toward trade conflicts gave additional momentum for us Europeans actually to concentrate” and reach new trade agreements with other global partners, such as Japan, Mexico, Singapore, and Vietnam, while also negotiating with others in Australia, New Zealand, and Latin America.

The United States and the EU do share a similar view on China and the potential dangers it provides for Western economies, Dombrovskis maintained. Concerns about Chinese companies stealing intellectual property, benefitting from improper government support, and using backdoors to leak information to leaders in Beijing are warning signs for Brussels and well as Washington, he said. While Europe “remains open to foreign investment including from China,” he argued, “we need to be careful when it concerns strategic sectors [and] strategic technologies.”

He pointed to a new EU investment screening mechanism, which “allows EU members to screen and if necessary stop certain investment,” from problematic sources such as Beijing as evidence Europe is taking this threat seriously.

While the United States and Europe have both attempted to bring their concerns about China’s economic practices to the World Trade Organization, Europe’s proposals have been shot down by the Trump administration, which has grown more and more hostile to the organization itself. “We feel that it would have been better to express those concerns in a coordinated way between the EU and the US,” Dombrovskis said, adding “but apparently this is not exactly happening.”