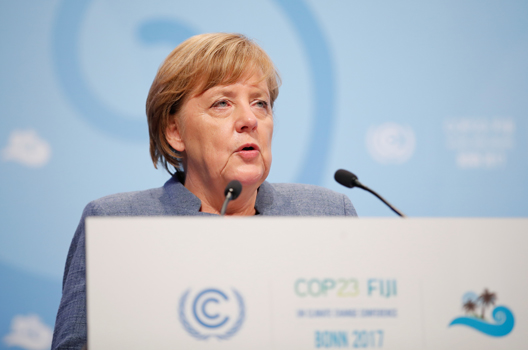 As the world gathered in Bonn for its twenty-third Conference of the Parties (COP23), the newly published Emissions Gap Report 2017 by the United Nations Environment Program (UNEP) helped to underline the mantra of the conference: all countries need to raise their climate protection efforts quickly and substantially.

The report shows that even if fully implemented, each nation’s current nationally determined commitments (NDCs), laid out by each of the signatories to the Paris Climate Agreement, would only achieve a mere third of the emission cuts required to meet the “(well) below 2 degrees” Celsius goal for global temperature increase set forth in the deal.

Climate Protection as a Transatlantic Challenge

Unfortunately, it is unlikely increased effort to lower global temperatures will come from the United States, the world’s second largest emitter of carbon dioxide (CO2). The administration of US President Donald J. Trump has abandoned the country’s climate goals, and instead has touted policies supporting domestic coal, oil, and natural gas resources. The members of the official US delegation to Bonn underlined this policy at COP23, hosting a side event promoting the “clean” use of fossil fuels as a vital part of future energy systems and criticizing the “anti-fossil bias” of multilateral development banks.

On the other side of the Atlantic, climate leader Germany is struggling with considerable credibility issues. Germany will likely not achieve its highly ambitious goal of reducing CO2 emissions to 40 percent below 1990 levels by 2020 due to a range of factors, including Germany’s delay in phasing out fossil fuels. In the power sector, the share of renewable energy is increasing, however coal still makes up roughly 40 percent of the electricity mix.  Meanwhile, in the United States coal accounts for only 30 percent. In the transport sector, Germany has completely neglected climate protection efforts and maintains its high oil-dependence. As if to underscore these difficulties, there is little agreement amongst the potential governing coalition parties (the Christian Democrats, the Green Party, and the Free Democratic Party) on how ambitious climate protection efforts should be.

It would be easy to continue to list the shortcomings and disagreements in transatlantic climate protection. However, complaining alone will not drive decarbonization efforts. In the end, combatting global warming is a global challenge, and strong networks like the transatlantic relationship play a vital role in tackling such global issues. The United States and Germany can and must do their share, despite the political challenges involved.

Fiji, the host of COP23, offers one approach to increasing transatlantic climate protection contributions. It has introduced its concept of “Talanoa” into the climate talks, meaning an “inclusive and transparent dialogue, in which people listen to each other, respect each other’s perspectives and seek solutions that benefit everyone.” Part of the process is to share ideas and skills, whereas blaming others and making critical observations, as noted in Fiji’s statements as conference president, impedes solutions.

In the interest of offering solutions rather than mutual recriminations, below are three approaches from a German perspective on how to work together to raise climate protection ambition efforts, emphasizing the Talanoa features of respecting perspectives, seeking solutions, and sharing skills.

Enhancing dialogues among federal government actors: The US and German federal governments may not share an interest in climate protection, but they do share other priorities linked to building more sustainable energy systems and fostering sustainable economic growth. Both countries continue to pursue a strategy of fueling economic growth through technological advancement, and remain critical players in research on advanced energy technology. In order to support their respective goals—climate protection, technological leadership, or economic growth—it will be important to build their cooperation on this mutual interest in energy technology advancements. Further opportunities for enhanced transatlantic dialogue include approaches to addressing the challenges of structural change and deindustrialization or adapting domestic industries to a growing global market demand for cleaner vehicles.

Building on strong, established links with subnational actors: For many years, Germany and US subnational actors have worked to build close ties in order to cooperate on pressing issues. It is now time for Germany to capitalize on these relationships and support and strengthen US state, local, and private sector actors that have united in networks such as the We Are Still In coalition. This group is dedicated to climate protection despite Trump’s withdrawal from the Paris Agreement.

These coalitions currently driving US emission reductions send positive signals to investors in energy efficiency and renewable energy technology. Their power lies in their ability to inspire climate protection efforts among formerly inactive states, cities, and businesses. Eventually, they may even inspire the federal government to reconsider its stance on the economic benefits of climate policy.

Reaching out to the US Rust Belt states: The Rust Belt, concentrated in the US Midwest, is responsible for some 25 percent of US carbon dioxide emissions. If the US is to achieve further emission reduction accomplishments, this region needs to start decarbonizing its economy, while also modernizing and offering economic opportunity for its residents. Coalitions like We Are Still In have an important role to play, engaging these states in energy transitions, showcasing policy and regulatory best practices as well as the economic opportunities of climate policy. Despite its political tensions, focused on the degree of ambition associated with the creation of clean energy policies, Germany can support this momentum as a case study of the compatibility of sustainable energy transition with robust economic growth. Constructive dialogue between the Rust Belt states and Germany could focus on the co-benefits of climate protection illustrated in Germany, among them creating jobs by attracting innovative businesses, skilled labor, and research, thereby creating opportunities for modernizing (energy) infrastructure as well as reducing energy demand. In reaching out to the Rust Belt, Germany can again also inspire an understanding at the US federal level that, despite posing a great challenge, climate protection is in the United States’ economic interest.

Sonja Thielges is a research associate at the Institute for Advanced Sustainability Studies (IASS) in Potsdam, Germany. You can follow IASS on Twitter @IASS_Potsdam