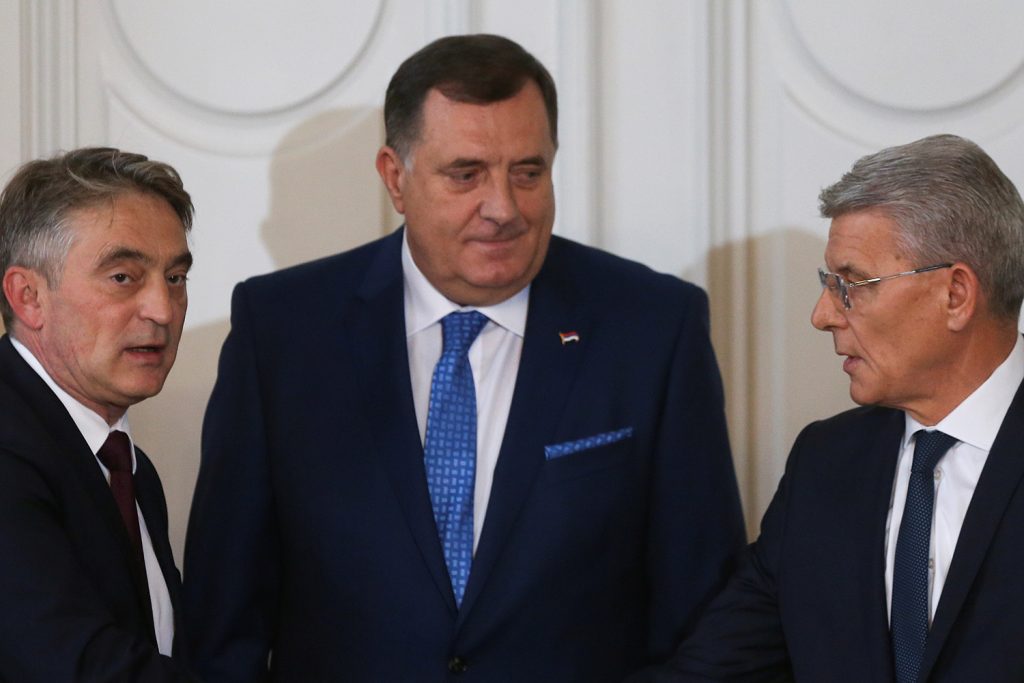 Since its emergence in December 2019, the spread of COVID-19 has overwhelmed health systems, damaged economies, and provided opportunistic politicians a chance to exploit the crisis to solidify political control. Following suit with governments around the world, Bosnia and Herzegovina’s prime minister and its two entities, the predominantly Bosniak and Croat populated Federation and the majority Serb Republika Srpska (RS), declared a state of disaster on March 17. Surprisingly, politicians from across the country—even secessionist advocate and Bosnian Serb leader Milorad Dodik—are rallying around a message of unity to defeat a common enemy: the novel coronavirus.

Throughout this pandemic, the ability of the often gridlocked and competing state institutions of Bosnia and Herzegovina (BiH) to implement a mostly uniform strategy has surprised its citizens, who are long accustomed to political disunity. In a startling pivot just one month after his recent “Goodbye BiH, welcome RS-Exit” statement, Dodik himself pressed for a united effort to combat the looming threat to public health. He called upon the armed forces to strengthen national borders and help establish quarantine tents for those coming into the country. Politicians from all of BiH’s “three constituent peoples” put aside their own ethno-political grudges and affiliations, as this proposal garnered immediatesupport from the other two members of the presidency.

Dodik’s unified messaging came only a week after he refused to consent to positioning troops on the border with Serbia to prevent the potential influx of migrants, opposing any sort of action that would “strengthen” the border between BiH and Serbia. Moreover, Dodik’s new call for the army to police the borders flies in the face of his previous opposition to the very creation of the unified Armed Forces of Bosnia and Herzegovina. The vast majority of BiH citizens, however, approved of his initiative and decisions regarding COVID-19. In a rare joint address to the public, the tripartite presidency emphasized the necessity for a joint effort in combating the pandemic and called upon citizens to trust the country’s institutions.

Such a shift in rhetoric and action is certainly unusual in the Bosnian context, but it may be evidence of a positive trend among varied responses to disasters. In their recent coronavirus focused report, Crisis Group notes that “economic, social, and political factors may converge to spark or aggravate crises,” but it is not “guaranteed that the pandemic’s consequences will be entirely or uniformly negative for peace and security. Natural disasters have sometimes resulted in the diminution of conflicts, as rival parties have had to work together, or at least maintain calm, to focus on preserving and rebuilding their societies.” For Bosnia, a crisis as far reaching and serious as COVID-19 may prove to be just enough of a force to bring a divided government together at a time when it is most needed.

Sign up for the latest from the Eurasia Center

Stay up-to-date with events, news, and publications for all of Eurasia with the Eurasia Center’s weekly newsletter.

How has the novel coronavirus managed to do the seemingly impossible and unite BiH’s political elite? For once, the crisis is external rather than manufactured by the elites themselves. Whether it is Bosnian Serbs talking about secession, Bosniaks desiring a more centralized state, or the Bosnian Croats aspiring for the creation of a third political entity, BiH elites tend to create a vicious cycle that increases inter-ethnic mistrust and keeps them in power. But the novel coronavirus pandemic knows no borders and recognizes no ethnic or class divisions, nor can it be stopped via a mutual agreement among just elites. Political leaders have been forced to acknowledge that the only way to implement the necessary measures to curtail the spread of the virus is through the institutions of the state, which necessitates joint decision making.

This moment could be short-lived. Deep divisions remain and could spark old flames of ethno-political tensions, as reflected in some of the coronavirus measures. Residents currently face different treatment when entering the country, depending on whether they reside in Republika Srpska or the Federation of Bosnia and Herzegovina (FBiH). While those living in RS would have to stay in tents as part of the quarantine camps located at land border posts, those from FBiH are allowed to go home and self-isolate. RS was also quicker to impose a curfew and Dodik voiced some of his frustrations over what he perceived as a lack of seriousness on the part of FBiH, which he criticized as slow in making important decisions relating to the containment.

Both US President Donald J. Trump and French President Emmanuel Macron proclaimed their countries to be “at war” with the coronavirus, as their citizens are forced to adopt measures that disrupt their daily lives. No such declaration was necessary in Bosnia and Herzegovina; setting up of crisis committees, curfews, and restrictions on visiting family members is familiar for anyone who was alive during the war in the 1990s. If quarantining entities, cantons, and cities is eventually required, many will fear that this will be used as precedent for harder control of the country’s “invisible” internal borders, even after the crisis ends.

On the other hand, this pandemic is also an opportunity to come together and realize how mutually dependent the people of BiH are. Since neighboring countries have closed their borders, this could also be an opportunity for both citizens and politicians to realize that the virus does not consider whether one is Bosniak, Croat, or Serb, and cooperation is the prerequisite for successful containment, as well as the functioning of the country more broadly. Their initial response to the COVID-19 outbreak shows that even the staunchest opponents of Bosnia and Herzegovina’s unity are capable of working within its institutions and putting the public interest before their ethno-political ambitions. Now they only need to be willing to do so outside of the threat of a global pandemic.

Semir Dzebo is a doctoral candidate at the Department of International Relations at Central European University.

Shelby Magid is an assistant director at the Atlantic Council’s Eurasia Center.