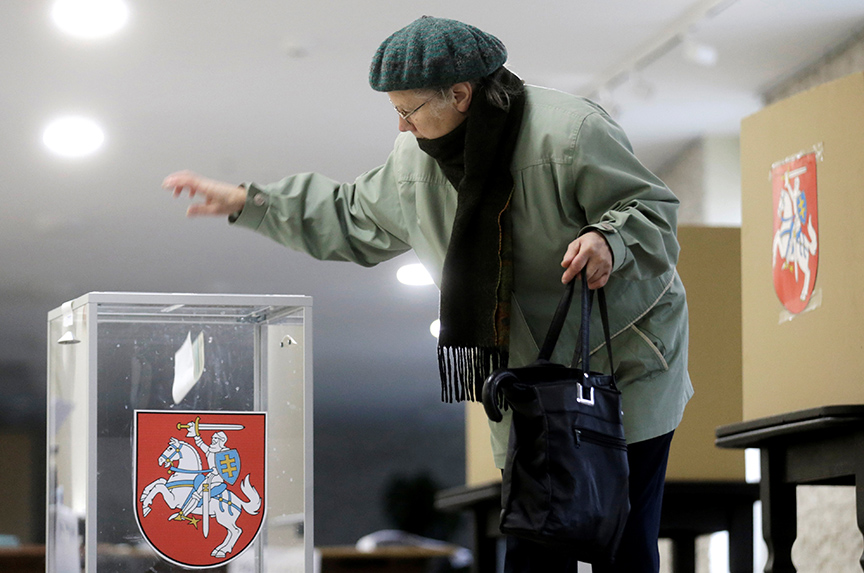 On the same day that the United States announced the election of Donald J. Trump as its new president, its small ally, Lithuania, announced its new government. The relatively unknown Peasants and Greens Union party, which won the most votes in parliamentary elections on October 23, has, at last, finalized its coalition agreement with the Social Democrats party. However, the lack of cohesion and a clear ideology within the dominant Peasants and Greens Union party might spell trouble for the next government of Lithuania.

In light of the rise of populism and far-right movements across Europe, as well as the challenge posed by a revanchist Russia, the seeming lack of ideological unity within the Peasants and Greens Unions party and its relative novelty on the political scene raises more questions than answers on what the next four years will bring to the small country on Europe’s eastern frontier.

The Peasants and Greens Union party won fifty-four out of a total 141 seats in parliament after two rounds of elections on October 9 and 23. Over the course of the previous year the party rebranded itself from its traditional overly agricultural leanings to become a catch-all party for the parliamentary elections in October. The party was guided by Ramūnas Karbauskis, one of Lithuania’s largest owners of farmland. The independent, but widely popular former Minister of Interior, Saulius Skvernelis, also joined the electoral campaign of the Peasants and Greens and his public profile brought the party considerable publicity and appeal. To date, most of the party members have not expressed their political views on a number of questions, and when they have they often present conflicting and even incompatible positions ranging from slightly conservative to strongly tilted toward the left.

Despite its recent reintroduction to the Lithuanian parliament, the Seimas, the Peasants and Greens Union party is far from new. Since its establishment in 1990 as an agrarian voice, the party has tried on various names. It settled on its current name by adding the “Greens” affiliation in 2012. Kazimira Prunskienė, a former prime minister, led the party after Lithuania declared independence in 1990. Later, the party nearly turned defunct when after the 2012 parliamentary elections it only had one seat in parliament before regaining popularity in 2016—a fact marked by its recent electoral success. Their spectacular political rebirth was in no small part influenced by their criticism of the highly politicized nature of various public institutions in Lithuania. As a result, they have advocated for the creation of a semi technocratic government, where ‘specialists’ – individuals who have professional working experience in particular industries rather than politicians – would run the ministries.

There is, however, uncertainty about the Peasants and Greens Union party’s political agenda. The party seems to strike a careful balance between a center-left and mildly populist stance, but it is likely that it will only show its true colors once the ruling coalition with the Social Democrats takes its first steps in the Seimas. At the moment, the tentative policies are centered on an appeal to increase state ownership in the economy, an overhaul of the pensions system, and “sobriety” in terms of restricting the consumption of alcohol. It is largely unclear how exactly the party will pursue these goals.

The Peasants and Greens Union party’s electoral success reinforces a pattern that has developed over the course of parliamentary elections in Lithuania, where a new or unknown party performs well because voters are looking for change. In 2004, for example, the newly formed Labor party, led by the Russian-born millionaire businessman Viktor Uspaskich, and the new Order and Justice party, led by the impeached Lithuanian President Rolandas Paksas, swept the elections to come to power. In the 2008 election it was the newly-created National Resurrection party, led by the showman and entertainer Arūnas Valinskas, that collected enough votes to join the coalition government.

The center-left Social Democrats party emerged, after long negotiations, as a partner to the Peasants and Greens Union in a coalition government. The Social Democrats, having led the previous coalition government from 2012 to 2016, fared poorly in the October elections. It won only seventeen seats. Its poor showing can be largely attributed to the party’s implicit mantra of refraining from unpopular, but necessary, reforms in fields like education and the economy that resulted in an underperforming and underwhelming four-year stint in power. The party’s aging leadership and membership has not helped reinvigorate its appeal with the youth who voted in record numbers this year. Nonetheless, the Social Democrats will serve as the more experienced partner to the Peasants and Greens Union, bringing more stability and certainty in the new government coalition.

Despite receiving a large number of votes in the first round of elections, the center-right Homeland Union party experienced defeat in the runoff round, in the end winning a total of thirty-one seats. Having led the government from 2008 to 2012 when it pursued unpopular but prudent fiscal policies, the party has managed to reinvent itself by making considerable changes in its leadership. This, however, was not enough to help it win the election. The new young faces of the party, which include Gabrielius Landsbergis (grandson of the patriarch of the party and leader of the independence movement Vytautas Landsbergis) and others, are a notable break from the previous decades in which politics was dominated by the same personalities. For instance, the former Homeland Union leader, Andrius Kubilius, served as Lithuania’s prime minister from 1999 to 2000 and again from 2008 to 2012, and the senior Landsbergis held considerable sway over the party from the early 1990s to the mid-2010s.

The Electoral Action of Poles (EAPL), the party that represents Lithuania’s ethnic minorities, has fared poorly in these elections and will join the opposition camp. The EAPL won only eight seats despite considerable efforts over the past several years by its leader, Valdemar Tomaševski, to unite Lithuania’s Polish and Russian populations under a single party banner. The EAPL has raised the issue of minority discrimination to explain the economic underdevelopment of the largely Polish and Russian-speaking regions and has positioned itself as the voice of all minorities in Lithuania. Tomaševski, who is perceived by some to have the Kremlin’s blessing, had openly supported Russia’s annexation of Crimea in March of 2014. This stance may have alienated the EAPL from more moderate voters.

Troubled times at home and abroad

In addition to the uncertainty looming over the ideological unity of the Peasants and Greens Union party and the concerns that the party might splinter going forward, Lithuania faces serious challenges both at home and abroad. Although the economic conditions have gradually improved following the financial crisis of 2008, emigration continues unabated. In 2015, 44,533 people emigrated from Lithuania, the greatest number since 2011. To put this into a broader perspective, almost a third of Lithuania’s total population has left the country since 1990.

Russia’s grip over Lithuania has considerably weakened over the years. Lithuania cut its energy dependence on Moscow when it inaugurated the Klaipėda LNG import terminal in 2014. Most significantly, NATO’s recent decision to deploy a battalion-sized military unit in Lithuania assuages the risks of a Moscow-instigated destabilization.

Finally, Europe’s migrant crisis is a greatly divisive issue in Lithuanian politics and society. Fears of refugees and immigration could increase friction not only within Lithuania, but also between Brussels and Vilnius.

The new Lithuanian government will take the reins of the country in a complex international environment. As the new Trump administration in the United States is poised to be more inward looking, as Russia continues on the path of resurgent aggression, and as the EU faces a number of internal challenges, the new Lithuanian government may only have itself to lean on in order to address troubles at home and abroad.  The fragile cohesion of the Peasants and Greens Union party may undermine the capacity of the ruling coalition—wielding as it does a fragile majority in the parliament— to pass difficult, but necessary legislation. Bearing in mind the plethora of problems that the new government will have to solve, it remains to be seen how well it will be able to rise to the challenge.

Agnia Grigas is a nonresident senior fellow in the Atlantic Council’s Dinu Patriciu Eurasia Center. She is the author of The New Geopolitics of Natural Gas  and Beyond Crimea: The New Russian Empire. You can follow her on Twitter @AgniaGrigas.

Image: A woman cast her vote during a general election run-off in Birzai, Lithuania, on October 23. (Reuters/Ints Kalnins)