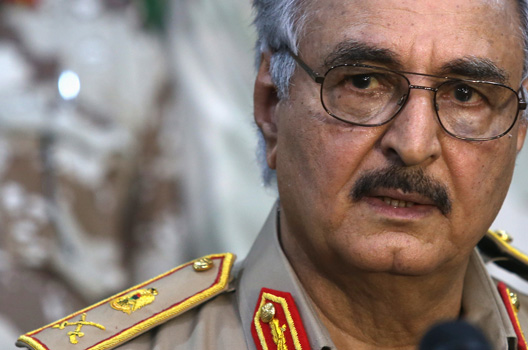 The appointment of controversial Gen Khalifa Haftar (above) as the head of Libya's army is “a slow-motion coup” that will complicate the UN peace effort, says Hafed al-Ghwell, a Nonresident Senior Fellow in the Atlantic Council's Rafik Hariri Center for the Middle East. (REUTERS/Esam Omran Al-Fetori)

Rival factions in Libya must come together for talks in Morocco this week to take on the threat posed by an affiliate of the Islamic State in Iraq and al-Sham (ISIS), says Atlantic Council analyst Fadel Lamen.

An ISIS affiliate has exploited the political and security vacuum in Libya by putting down roots in the eastern part of the country.

In January, ISIS-affiliated militants attacked Tripoli’s Corinthia Hotel. They shocked the world in February by beheading twenty-one Egyptian Coptic Christians on a beach in Libya.

“This should galvanize everybody to come together to fight an existential threat,” Lamen, who is a Nonresident Fellow in the Atlantic Council’s Rafik Hariri Center for the Middle East, said in an interview.

Lamen will participate in the talks in Morocco on March 5 as a civil society representative and Chairman of the National Dialogue Commission.

Instability in Libya threatens not only the North African nation, but the region as a whole, said Lamen.

The governments of the US, United Kingdom, France, Italy, Germany, and Spain had said the execution of Egyptian Copts underscored the need for a political resolution to the Libyan conflict, noting that continuing chaos there “only benefits terrorist groups, including [ISIS].”

Libya has two governments and two parliaments, both backed by armed groups.

The internationally recognized Prime Minister, Abdullah al-Thinni, was forced to relocate his government from Tripoli to the eastern port city of Tobruk after Libya Dawn, an armed militia, seized the capital last summer.

The House of Representatives is based in Tobruk, while a rival General National Congress has been set up in Tripoli.

The two sides have been fighting for control of territory, oil revenue, and oil terminals.

Previous attempts by the United Nations’ envoy, Bernardino Leon, to facilitate a dialogue between the rival factions broke down after some of the players boycotted the meetings in Ghadames, Libya, and Geneva.

Leon’s effort is focused on forming a national unity government, securing a ceasefire, and getting militias to withdraw from population centers.

Representatives from both factions are expected to attend the talks in Morocco.

A potential point of friction emerged this week when the government in Tobruk appointed Gen Khalifa Haftar, a controversial anti-Islamist figure, as head of the Libyan army.

Haftar last year launched Operation Dignity — a self-declared war on Islamists in Libya’s eastern city of Benghazi. He has been criticized for his aggressive use of force and the government in Tripoli has denounced him as a war criminal.

Hafed al-Ghwell, a Nonresident Senior Fellow in the Rafik Hariri Center, decribed Haftar’s appointment as “a slow-motion coup,” which he said has complicated the UN peace effort.

“Haftar’s troops have bombed airports and hospitals, which makes him subject to international law, so it would be very difficult for the UN to include Haftar” in the process, he added.

Haftar is a “very contentious figure,” so the government in Tripoli — which is backed by the Libya Dawn militia — “might resist the fact that they have to be part of a negotiation that includes such a relevant position for Haftar,” said Karim Mezran, Resident Senior Fellow at the Rafik Hariri Center.

However, Lamen, noting that the economic and humanitarian situation in Libya has reached a critical point, said it was time to push for an agreement.

Mezran agreed that the talks in Morocco will be crucial.

“In Morocco, what you’re going to see is that either all participate or they will continue with threats to boycott,” said Mezran.

“Even if there is no particular outcome, it will be important if they just meet,” he added.

On February 16, Egypt responded to the beheadings of Egyptian Copts by ISIS with airstrikes on militant positions in the Libyan coastal cities of Derna and Sirte.

In an earlier interview with the New Atlanticist, Mezran said Egypt’s retaliation violated the UN arms embargo and had opened the door to intervention by other countries.

Egyptian President Abdel Fattah Sisi called for a UN resolution mandating an international coalition to act in Libya, though Lamen opposes such intervention.

“What we need is international support,” he said.