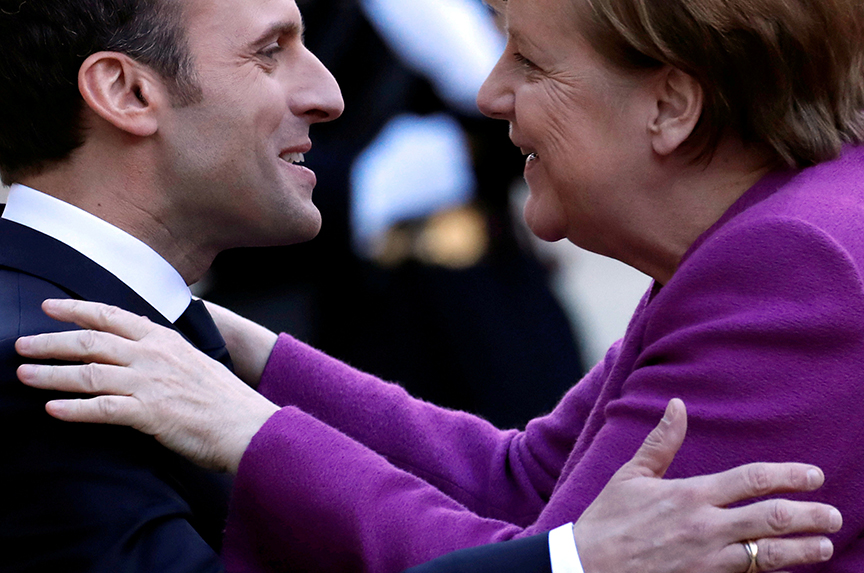 “We are happy when people and things conform and unhappy when they don’t. People and events don’t disappoint us, our models of reality do.”

Lawmakers in the national parliament—who “owe just about everything to him”—are “perfect foot soldiers” for a leader with “an expansive notion of power.” He has “almost unchecked authority” and critics accuse him of “building a fawning cult of personality.”

That’s the New York Times talking not about Hungary’s Viktor Orban or Turkey’s Recep Tayyip Erdoğan, but rather about French President Emmanuel Macron. With exactly this situation in mind, Etienne Soula, a young French researcher with the Hudson Institute and the Carnegie Endowment for International Peace, quipped to me recently that while many of us fret about the rise of illiberal democracy in parts of Europe, we might keep an eye on liberal autocracy, too. Indeed, Macron—for many, the great hope for liberal democracy against growing authoritarian populism in France and elsewhere—rules in a manner that turns out not to be very liberal or democratic.

We live in a time of exceptional paradox and contradiction.

I thought for years I had Angela Merkel pegged. I first encountered Merkel in the summer of 2005 a few months before she became chancellor of Germany. She had invited me and a couple other pundits to Schwerin, a couple hours’ drive northwest of Berlin, where at a picnic table under a tree by a small pond we sat for the day talking foreign policy. (I led the Aspen Institute Berlin at the time.) What struck me was how Merkel collected information. She seldom ventured an opinion, constantly probing instead, scribbling in her small notebook all the while. Ever since it all added up for me, the way Merkel leads—a model of scientific rationality. There was sense to this, too. Merkel holds a doctorate in quantum chemistry. Her husband, Joachim Sauer—himself a quantum chemist—is a professor at Humboldt University in Berlin.

Then came 2015 when methodical Merkel admitted some one million refugees from mostly Muslim-majority countries into Germany. A genuinely humanitarian impulse would prove to be like rocket fuel for Germany’s populist right. The refugee crisis has opened sensitive and increasingly raw debates in Germany about security, social cohesion, and identity. It has been awhile since Germans have talked about what it means to be German.

Between Washington and a European Union (EU) led by Paris and Berlin there will be tussles in the months ahead over trade, burden sharing, and the Iran nuclear deal. I would keep an eye on two even larger strategic matters, however.

First, the EU itself. I suspect France and Germany will struggle mightily to keep a post-Brexit EU from falling part. During Cold War division, it was a French adage that “we love Germany so much, we’re glad there are two of them.” A French answer to the problem of German power—especially since unification—has always been more “Europe.” Thus Macron, the leader of Europe’s most unilateral nation, dons the mantle of multilateralism and calls today for greater integration. Bismarck once said he often found the word “Europe” coming from the mouths of those national politicians who wanted something but dared not ask in their own name.

Watch for Germany to start asking. French talk of things like common EU finance is seen by an increasingly number of German elites—who just now are catching up with German public opinion —as schemes to shovel more good German money to bad European economies in the south. Don’t be surprised if a new sovereignty-minded Germany starts leaning toward the euro skepticism that finds such fertile ground today in Austria and Central Europe.

What if the EU were to end? No, war between major powers is not in the cards. Yet Balkanization and new forms of instability affecting the United States might well be.

Second, pay attention to democratic coherence within states. Czech member of Parliament, Karel Schwarzenberg—the close friend of the late playwright-turned-dissident-turned-president Vaclav Havel—said to me recently, “whoever said that democracy in our part of the world is natural or permanent?” It’s a jarring thought. Across the West (the United States  included) voter ties to establishment parties have been loosening, trust in elites—in traditional media and elected politicians atop the list—has been eroding, and as Schwarzenberg added to me, “vacuums get filled.”

In the Czech Republic, a billionaire prime minister panders and grabs increasingly more power. In Germany, a protest party called AfD (Alternative für Deutschland) which barely existed five years ago has today seats in fourteen of Germany’s sixteen state legislatures and ninety-two seats in the Bundestag, Germany’s national parliament. Back in Paris, Macron leads decisively and efficiently—within a French system fluid and fragmenting.

We focus on Merkel, Macron, and of course Donald J. Trump. Let’s see who’s around a couple years from now. We might discover that deeper, bottom-up change is still afoot.