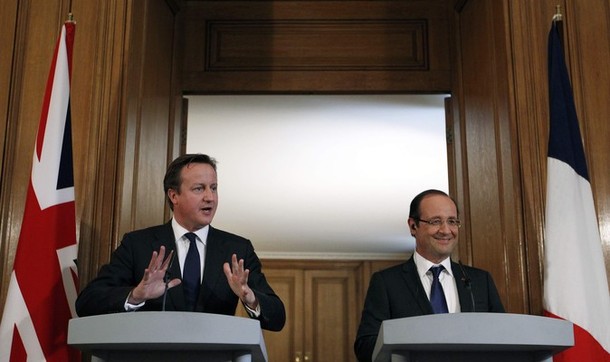 Can the Franco-British strategic defense relationship survive? Yesterday, at the close of a modest lunch in Downing Street, British Prime Minister David Cameron said he had, “found much common ground” with French President Francois Hollande. Following discussions ranging from the Eurozone debt crisis to Syria and Iran Cameron talked of a “strong relationship” and that both agreed the planned increase of the EU’s budget to €14 billion ($25 bn) by 2020 was “unacceptable”.

Clearly, the many issues of contention, such as France’s call for a financial services transaction tax, were either avoided or kept secret. Cameron only hinted at the fundamental issue dividing the two countries; “We are clearly better off within the European Union…but I don’t think Britain is happy with the current relationship”.

The Franco-British strategic defense relationship matters. First, it is a key European-European state relationship beyond EU competence. Second, it is perhaps the only European relationship willing to think big about military matters in a very big military world. Founded on two landmark defense agreements the relationship has long been a strategic cornerstone. The 1998 St Malo Declaration seemed for a time to have resolved tension between NATO and the EU’s defense ambitions and paved the way for the now moribund Common Security and Defence Policy.

On 2 November, 2010 the Franco-British Defence and Security Treaty was signed and heralded a new dawn in the two countries’ strategic defense relationship. The treaty called for “mutual interdependence” and the sharing and pooling of defense materials and equipment, the building of joint facilities and “mutual access” to each other’s defense industries. In addition there were agreements over nuclear stockpile stewardship, a new framework agreement for exchanges on operational matters and a proposal for a Combined Joint Expeditionary Force. At the time there was also agreement that Britain and France should work together on the next generation of aircraft carriers. However, the British decision to revert to the use solely of carrier-based short and vertical take-off aircraft effectively scrapped that line of co-operation.

Two other developments have undermined the relationship. First, the Eurozone crisis has pitched Anglo-French relations into uncharted waters inevitably affecting the strategic defense relationship. France is not only at the heart of the crisis whilst Britain is fast becoming a full-paying third-class member of the EU, Paris has always seen such agreements as a step on the road to a full-blown European defense construct to which Britain is implacably opposed. Economic union will in time make that more likely not less. Second, the 2010 treaty came at a time when Cameron was still early in his premiership and was hoping to ‘rebalance’ Britain’s relationship between Europe and the US. However, such a rebalancing pre-supposed a Britain that would not be forced to choose between its economic relationship with Europe and its strategic defense relationship with the US. The January 2012 shift in US defense posture towards East Asia will indeed over time force Britain to choose. And, given the Great European Defence Depression the British are rightly going with the Americans, even though that will have its own problems.

Given those pressures it will be a miracle if the Franco-British strategic relationship survives…but survive it must for the good of all.

In the short-term some sensitivity will be needed. The British must not under-estimate the attachment of the French to the Euro as a symbol of the French view of Europe. The French must stop lecturing the British about said view of ‘Europe’, and stop attempting to subordinate Britain to French ambitions and the bill that goes along with them.

Sadly, the toxic chemistry between the two countries makes trust a rare commodity. Sometime ago I had a chat with a French four-star general whom I like and respect. The conversation was not easy. He told me a story of a recent deployment by the French aircraft-carrier Charles de Gaulle, which had been escorted by a British frigate. He claimed that Paris learnt later that the frigate only had orders to protect itself. He even called the British “perfidious”. I checked. Not only was mon general wrong, but London found working with the French proved difficult because agreed operational schedules were never maintained. What is clear is that Paris does feel let down by London at times and has a point. Britain and France need to rise above this kind of thing.

The road ahead will be rocky. Cameron’s contradictory argument that more European integration is needed, but that non-integrating Britain is better off in the European Union is patent nonsense. Something is going to have to give and unless the two countries can demonstrate a genius for statecraft both have lacked for many years then it is hard to see the Franco-British strategic defence relationship surviving. That would be a shame given the world in which these two middling powers are moving.