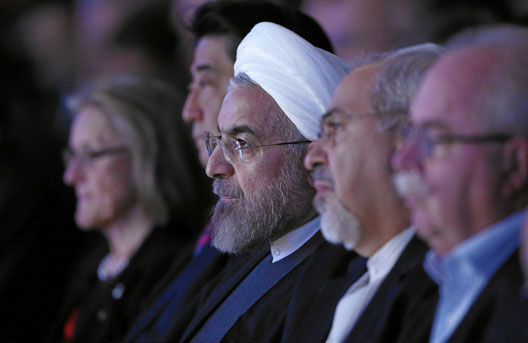 After several weeks of consideration, the Barack Obama administration has expressed reservations to Iran about the tentative choice of a middle-aged career diplomat and close associate of President Hassan Rouhani as the country’s next ambassador to the UN.

Hamid Aboutalebi, 56, a former Iranian ambassador to Australia, Belgium and Italy who currently serves as Rouhani’s deputy chief of staff for political affairs, has acknowledged to Iranian media in interviews that on occasion, he served as a translator for the radical students who held 52 Americans hostage in Tehran from 1979-81.

Aboutalebi was not among the leaders of the takeover, which began as a protest after President Jimmy Carter admitted the ousted Shah of Iran to the US for medical treatment. Many Iranians who supported the 1978-79 revolution against the Shah worried that the United States would try to reinstall him on the throne as it did in 1953 when the CIA helped engineer the downfall of an elected prime minister, Mohammad Mossadegh. They did not believe that the Shah was ill – as it turned out, terminally – with cancer.

The students who led the takeover of the US Embassy in Tehran intended the protest to last for only for a day or two. But the seizure aroused so much popular support at the time that the country’s leader – Ayatollah Ruhollah Khomeini – decided to prolong it and used the crisis to weed out remaining pro-Western elements in his government. The US inability to secure freedom for the hostages for 444 days was also a major factor in President Jimmy Carter’s failure to win election to a second term.

In one of history’s delicious ironies, many of those who were prominent in the takeover went on to become members of Iran’s reform movement and have sought better relations with the United States.

One of the most well-known hostage holders, Abbas Abdi, went to Paris in 1998 and had dinner with Barry Rosen, the US embassy press officer during the crisis. Abdi “privately apologized for what he had done to myself and my family,” Rosen told me some years ago when I was researching a  book on US-Iran relations.

Abdi, who I met in Tehran in 1999, was beaten by hard-line vigilantes when he returned from the meeting with Rosen and later jailed after conducting a poll that showed that most Iranians wanted diplomatic ties with the United States. Describing his political evolution, Abdi told me: “If a person does not make changes as he ages, he must be a piece of wood….In the days of the revolution, we were shouting and screaming for liberty, but we did not know what it meant.”

Others who became notorious during in the takeover — such as Massoumeh Ebtekar, whom the hostages dubbed “Sister Mary” when she acted as a spokeswomen for the hostage holders with Western media – have gone on to important jobs in the Iranian government. Ebtekar is vice president of Iran for the environment – a post she also held under the Khatami administration.

Ebrahim Asgharzadeh, an engineering student who came up with the idea of seizing the embassy to begin with, also turned reformer and served in the Iranian parliament and on Tehran’s city council.  Contrary to some press reports, former President Mahmoud Ahmadinejad opposed seizing the US embassy and wanted to occupy the Soviet one instead.

The Iranian government has never formally apologized for the takeover although then President Mohammad Khatami, in an interview with CNN shortly after his 1997 election, expressed regret that the feelings of the American people had been hurt.

Former US hostages have mixed emotions about their ordeal, with some seeking financial compensation or at least an acknowledgement from Iran’s current leaders that the takeover violated the most basic diplomatic norms.

John Limbert, one of the former hostages, told VOA that it was a mistake for the Iranians to even consider sending Aboutalebi to New York given his connection, however peripheral, to the embassy takeover. “This one’s got me scratching my head,” Limbert said.

Noting that the US once sent former CIA head Richard Helms to Iran while the Shah was still in power, Limbert added, “We live in a world of symbolism. They symbolism of that [sending Helms] was terrible [given the CIA role in the 1953 coup] and the symbolism of this [Aboutalebi] is also terrible.”

But rejecting Aboutalebi also seems like pandering to those – unlike Limbert — who have no desire for US-Iran reconciliation and indeed, would like to sabotage current negotiations.

Sen. Ted Cruz (R-Tex.) immediately jumped on the story and introduced a billthis week barring “known terrorists” from serving as envoys in the United States.

Sen. John McCain (R-Ariz.) concurred that US law should be changed to bar Aboutalebi even though his post would be in New York, not Washington.

Given the delicate state of nuclear negotiations between the US and Iran, one might argue that even suggesting someone with Aboutalebi’s background is an unnecessary distraction. One of the Iranian UN ambassador’s most important roles is to meet a wide range of Americans from civil society and politics and it might be hard for him to fulfill this function while subjected to a constant barrage of accusations about his past. On the other hand, Aboutalebi is said to be extremely close to Rouhani and so, could be an authoritative interlocutor with Americans at a crucial moment in history. And rejecting him is likely to give ammunition to Rouhani’s anti-US domestic opposition.

The kerfuffle also raises the question of when it will be time to move on from mutual recriminations. Iran has plenty of grievances against the US beyond the coup against Mossadegh, including US support for the murderous Saddam Hussein during the 1980-88 Iran-Iraq war, which killed more than a quarter of a million Iranians.

The focus now should be on preventing more war, terrorism and proliferation.

Asked how we can get beyond the hostage crisis, Limbert said he would like to see the Iranian government end its state of “denial” about the embassy seizure, provide compensation to the victims and even invite a delegation to Iran. But he conceded for now that is still “a fantasy.”

Image: Hassan Rouhani, President of the Islamic Republic of Iran is seen in th audience during the 'Special Adress' at the Annual Meeting 2014 of the World Economic Forum at the congress center in Davos, January 22, 2014. (Photo: Flickr/World Economic Forum/CC License)