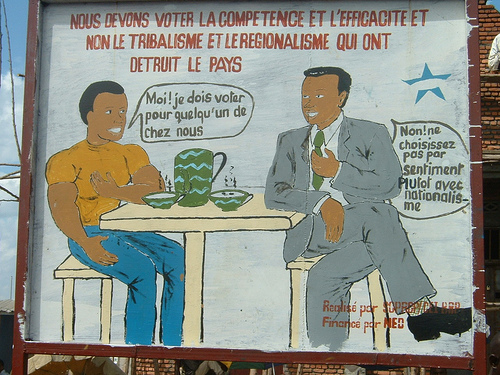 If you’re a human being who speaks French, you’re more likely to be African than European. La Francophonie’s demographic center of gravity is now somewhere around Bamako, Mali.

If you’re a human being who is literate in French — say, at a high school graduate level — you’re probably European. But not for much longer.

Demographic growth plus the slow-but-steady rise of literacy rates in most of Africa means that by the next decade, most literate Francophones will be African too.

Given time, this is going to have interesting effects on French literature, language and culture. African writers are going to be more interesting and important. African dominance will take much longer — Africa is still very poor, after all — but it’s not a completely daft idea; if Africa ever starts converging on European income levels, there’ll be a lot of money in making French language products for them. In the nearer term… oh, watch for African script and screen writers drifting north to Paris. Longer term, well, the Academie Francaise has always allowed non-French citizens to be members; by 2050, I’d expect these members to be approaching a majority.

If you’re a human being who speaks French, and is also a practicing Catholic, you’re almost certainly African — like, ten-to-one odds. Plenty of people have already pointed out that Catholicism, slowly retreating in Europe, is growing like crazy in Africa, so I won’t go into that here.

But: French is now one of the major languages of Islam. There’s been a lot of hand-wringing about the Muslim populations in Europe. But we never hear much about their mirror images: the Muslims who stayed behind, but who’ve become linguistically — and to some small degree, culturally — French. Northwest Africa in particular, Senegal and Mali and Mauretania and Niger, is a land of Francophone Muslims. And many of them have picked up more from France than just the language; Senegalese love croissants and fine pastries and read Tintin and Le Petit Prince to their kids.

Soon there will be tens of millions of Muslims who grew up reading Sartre and Dumas, the plays of Ionesco and the poetry of Baudelaire. (And who’ll be able to read Houllebecq in the original! Um, if they want to.) What long-term effects that might have… well, I really have no idea.

Douglas Muir is a development consultant.  He has worked for USAID and the World Bank in Eastern Europe, Asia and Africa.  He currently lives in Germany.  This essay was originally published at A Fistful of Euros. Photo by Flickr user amalthya under Creative Commons license.