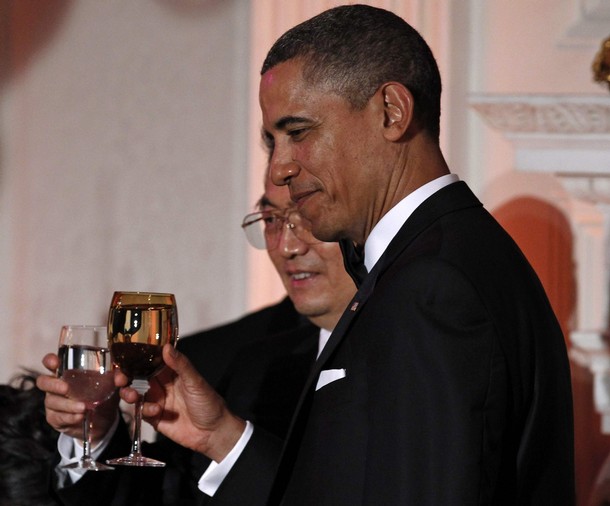 A great line was going around Twitter last night:  "The 2009 Nobel Peace Prize winner holds a State Dinner for a man who has the 2010 winner under House Arrest."

And, indeed, there was some amusing irony in President Obama, the 2009 winner, hosting Chinese President Hu Jintao for a massive state dinner.  Among his government’s many human rights abuses is the holding of political prisoners, with  2010 Nobel winner Liu Xiaobo perhaps the most famous among them.   Incidentally, the Washington Post‘s Dana Milbank reminds us ("Human rights? Hu will hear none of it"), Obama’s predecessor declined to so honor Hu on his previous visit to Washington.

But, while I was dubious of awarding Obama a Nobel Prize mere days into his presidency, his decision here isn’t a slap in the face of the Committee.   Rather, it’s evidence that being leader of the world’s sole remaining superpower is more complicated than being a dissident — even if the accommodations are better.

In announcing the award for Liu, the Committee observed, "Over the past decades, China has achieved economic advances to which history can hardly show any equal. The country now has the world’s second largest economy; hundreds of millions of people have been lifted out of poverty."  But, they declared, "China’s new status must entail increased responsibility." Obama is faced with squaring that circle:  Both strengthening cooperation with a vital country moving in the right direction in so many ways and nudging its government toward better treatment for a billion plus citizens.

How to do this is a matter for debate.   Obama’s choice seems to be hard engagement.   In exchange for being feted at dinner, Hu had to endure a grilling at the hands of the American press.  AP’s Ben Feller asked Obama, "Can you explain to the American people how the United States can be so allied with a country that is known for treating its people so poorly, for using censorship and force to repress its people?"   And to Hu, Feller added, "I’d like to give you a chance to respond to this issue of human rights. How do you justify China’s record, and do you think that’s any of the business of the American people?"    When Hu ducked the question, pretending not to have understood it, Bloomberg’s Hans Nichols pot him on the spot, "First off, my colleague asked you a question about human rights which you did not answer. I was wondering if we could get an answer to that question."

Hu finally answered, "China is a developing country with a huge population and also a developing country in a crucial stage of reform. In this context, China still faces many challenges in economic and social development, and a lot still needs to be done in China in terms of human rights."

That’s a rather tepid response to American ears but a rather bold admission for a proud man not accustomed to having to answer to anyone, let alone lowly reporters.   No, it doesn’t translate into direct action.   And, as Charles Freeman reminds us, we’ve heard such things before, "They have learned over the years that throwing a bone to the Americans is a pretty good way to shut them up."   Still, AP reports ("Obama presses China on human rights"), "White House officials said Hu, privately to Obama, expressed the same sentiment about China’s need to do more on human rights. They expressed surprise that Hu made the statement publicly and while overseas. Chinese leaders have typically argued that how the country handles human rights is an internal matter."

It’s quite possible that Hu understands that greater freedom for his people will be necessary, not only for China to fully assume its rightful place as a leader in the community of nations, but to sustain its economic momentum.  China will either remain cut off from the world in order to prop up the regime or it will be a full participant in the Information Age.  Hu surely knows that.

In the meantime, however, the leaders of the world’s two largest economies will continue to work together to seek mutual advantage.  Like it or not, human rights is only at the top of the agenda for countries that otherwise don’t much matter.   We manage to put these concerns aside when dealing with oil-rich emirates, after all.  Surely we can do it with the second most powerful country on the planet.