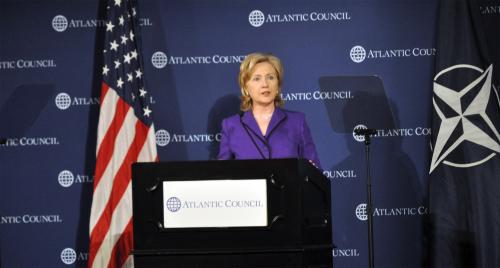 Hillary Clinton addressed the Atlantic Council this evening on “The Future of NATO” as a kickoff to a conference on a new strategic concept for the sixty-year-old Alliance.   She worked very hard to square the circle on NATO-Russia relations, both advocating increased cooperation and leaving the door open for further contentious expansion.

Clinton reiterated the bipartisan US policy of the last twenty years that “unambiguously, while Russia faces challenges to its security, NATO is not among them” and that “no outside power has a right to dictate the decision of a sovereign nation” to join a military alliance.  At the same time, she emphasized that “we want a cooperative relationship” and noting that “we face common threats” including drug trafficking along the Russia-Afghanistan border and the proliferation of nuclear weapons.

Asked by Atlantic Council president and CEO Frederick Kempe whether NATO’s expansion could conceivably include Russia, Clinton joked, “Well, I can imagine it — but I don’t know if Russia can.”

Intellectually, this policy is coherent.  Practically speaking, it isn’t.  At least not yet.

While we in the West understand that NATO is no threat to Russia — the idea borders on the absurd, in fact — it’s by no means clear in Moscow.  After all, preparing to fight — and thus deterring — a war with Soviet Russia was NATO’s core reason for coming into existence and sustained the Alliance its first four decades.  And, certainly, part of the attraction to the former Warsaw Pact countries for joining NATO was and remains an assurance that a recalcitrant Moscow doesn’t reassert control.

Given that Russia is both a major regional player and one that lacks confidence, NATO has a delicate balancing act.  Many European countries depend on Moscow for their energy supplies.  Indeed, so much so that Clinton argues that the framers of the new strategic concept should consider whether energy security constitutes an Article V mission.   As such, it’s inconceivable that every European power would risk war with Russia over the territorial integrity of Georgia or Ukraine — let alone that unanimity would exist.

So, until such time as Russia can conceive of itself as a member of NATO — or otherwise becomes so integrated into the community of nations as not to consider expansion to its very borders of an Alliance founded to contain it  a threat — it’s likely that the right of countries to join the Alliance regardless of Moscow’s wishes will remain a matter of theory rather than practice.  And that desires for “a cooperative relationship” will continue to trump expansion.