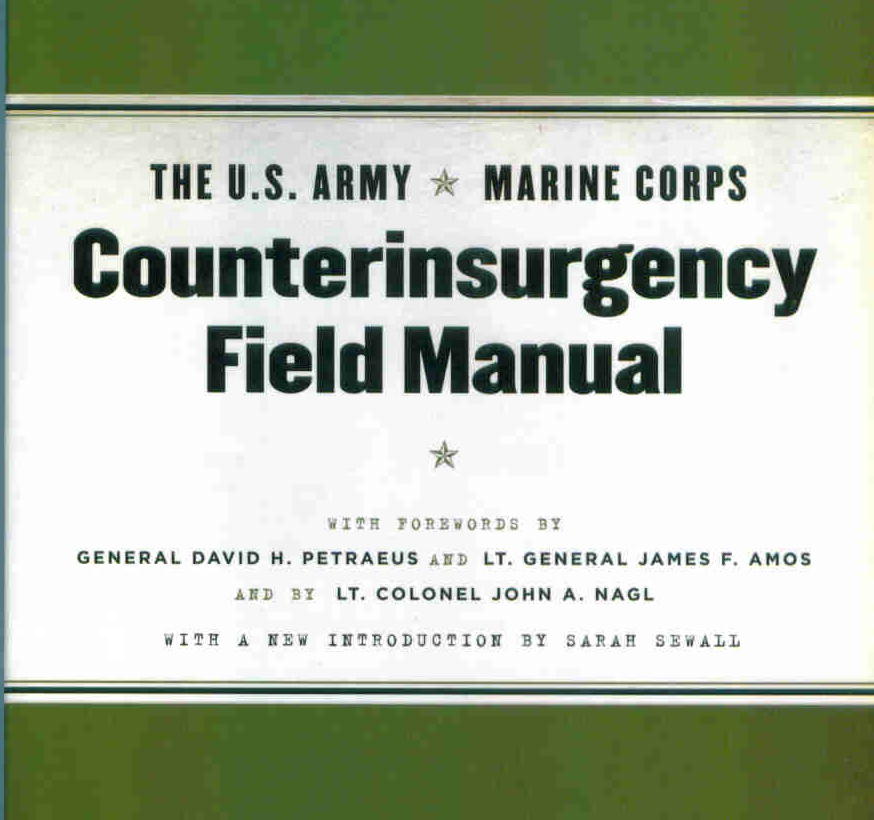 Fred Kaplan notices something about that whole COIN strategy in Afghanistan – it ain’t working and the US military is moving on :

Officials say a shift in U.S. war strategy has begun to take place in Afghanistan, away from classic counterinsurgency (protecting the population, providing basic services, promoting good government) and toward the traditional business of killing and capturing bad guys.

U.S. and NATO officers, intelligence analysts, and other officials and advisers now believe that our objectives in the Afghanistan war can no longer be accomplished in sufficiently short time through COIN alone or even through a COIN-dominant strategy.

Under classic COIN strategy, this process would take place slowly but steadily, as the presence of security forces and the supply of basic services boost popular allegiance to the Afghan government, which in turn dries up the base of support for the insurgents.

However, it is now calculated, even by many COIN advocates, that this process would take too long—and be too corrupted by Afghan politics—to work in any practical sense.

In any case, the time needed for success through a COIN campaign alone—another six to 10 years, or more, the strategy’s most avid supporters estimate—is seen as politically unsustainable.

As for Afghan politics, COIN can succeed only by, with, and through the host government U.S. troops in a COIN operation are—and advertise themselves to be—fighting on behalf of the host government. And yet, by all official accounts, Afghan President Hamid Karzai’s government is so distrusted by its own people—and so incompetent at (or uninterested in) providing services—that it cannot really serve as a reliable partner in a COIN campaign.

It’s really hard to describe how maddening it is to read something like this in October 2010, when throughout the Summer and Fall of 2009 it was the exact argument made by COIN opponents as to why a COIN operation was not going to work in Afghanistan. Now it appears after basically wasting a year and a half of trying to out governance the Taliban we’ve realized that . . . guess what population-centric COIN can’t work in Afghanistan.

It’s a dispiriting reminder of the extent to which COIN-fetishization has deeply distorted US military thinking over the last 4 years. COIN operations may occasionally have their place, but was always a terrible fit for US and NATO troops in Afghanistan because of the lack of host country support, the diminished US political will and growing timeline for withdrawal, the presence of unmolested safe havens in Pakistan etc. None of these arguments will seem novel to regular DA readers; but it’s simply a damning indictment of our military (and their enablers in thinktankistan) that these counter-arguments were brushed aside out of a misplaced, almost evangelical, faith in counter-insurgency as military doctrine.

Of course the irony of the shift in tactics is that a full-throated military offensive may not work either in Afghanistan and runs the risk of undermining the unmistakable signs that the Taliban have made a strategic decision to negotiate with the Karzai government. Matt Waldman offers one reason why in the New York Times today:

“It’s dangerous to assume that you can bring off a senior commander and all his men will follow,” Mr. Waldman said. It was more likely, he said, that the midlevel commanders now being killed by NATO would be replaced by others ever more committed to fighting. The idea that killing insurgents will take us to negotiations seems pretty doubtful,” Mr. Waldman said. “They have an infinite capacity to regenerate.”

There’s that. And there’s also the fact that for somewhat obvious reasons the Taliban leadership doesn’t want to negotiate from a position of weakness – and if believing they have achieved some sort of political stalemate gets them to the table (rather than bloodying them into submission) then so be it. Paradoxically, weakening the Taliban may actually backfire against US interests in Afghanistan. After all, isn’t a political settlement that leads to US withdrawal what we want to achieve as an end game (and sooner rather than later)?

If anything, now is the time to put on the brakes, rather than floor the gas pedal. But if there is one thing we an rely on when it comes to our military effort in Afghanistan, when faced with a decision on how to proceed . . . we’ll generally take the wrong one.

Michael Cohen is a Senior Fellow at the American Security Project and has served as chief speechwriter for Bill Richardson, Stuart Eizenstat, and Chris Dodd.  This essay previously appeared at Democracy Arsenal.