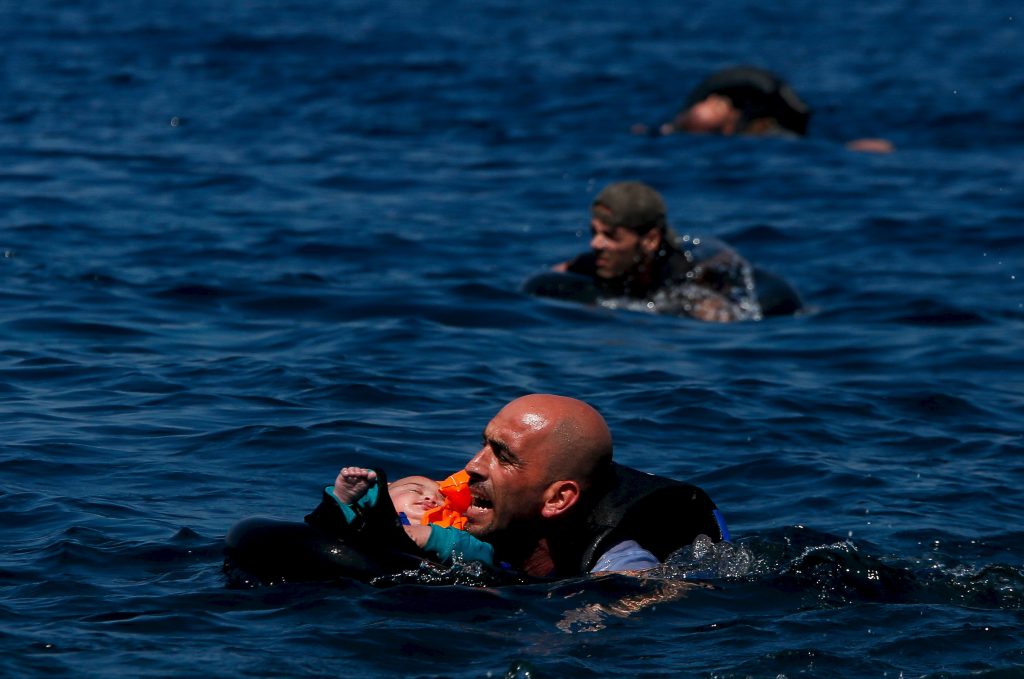 A Syrian refugee holding a baby swims towards the Greek island of Lesbos on September 12. (Reuters/Alkis Konstantinidis)

In 2016, it will be important to see if the United States and Russia can work together to end conflicts, says Atlantic Council’s Francis J. Ricciardone

Francis J. Ricciardone is the Vice President and Director of the Atlantic Council’s Rafik Hariri Center for the Middle East.

Ricciardone: The biggest and most important story in terms of the number of human lives affected and the severity of the impact on them is the hellish result of the breakdown of states in the region—the deaths, trauma, and the terrible dislocations of masses of people in terms of IDPs and refugees. That comes from the civil wars in Syria, Yemen, Libya, and also the attacks on the Iraqi state by ISIS [the Islamic State of Iraq and al-Sham].

This is as big a story as the dislocations of World War II—mass migrations of people, massive death and suffering, mass destruction of property. It will compel other governments, including the United States’ government, to pay attention and deal with it on a sustainedand strategic basis. There is no turning away from this.

Security threats will be just one of the many impacts on our wellbeing. There are compelling ethical and political dimensions as well. There are also severe economic impacts. If there is some restoration of the rule of law and stability in this region, then economic reconstruction and return of people should be possible, and there should be opportunity there. With wise policies, receiving states can also realize economic opportunity, and not only economic and political stress, from hosting refugees. But until there is a restoration of the rule of law in conflict-riven and failed states, there will be economic underperformance in the region.

Q: What is one story you will be watching closely in 2016?

Ricciardone: We already see the impact of the breakdown of the MENA regional order on the domestic US political debate about global affairs and how to cope with at least the security dimensions of the failure of states in the region. Most of that debate, so far, has not been very enlightened. Sadly, most of the discourse of fear has been about how best to erect walls around the United States and Europe, and the merits of “carpet bombing.” I think those are the wrong questions and they will not lead to viable solutions. Yes, we must protect ourselves, but deep and durable protection lies in collaborating effectively with those in the region who share an even greater and more direct stake than ours in mitigating the disasters arising from the failure of states, and ultimately in resolving the resultant civil wars and healing their deep wounds. This will be the work of generations, and it will be costly, with those in the region bearing the worst of the burden even if the rest of us prove more generous, visionary, and enlightened than we are now sounding in our public discourse. I don’t think we can shrink from that fundamental challenge of rallying and leading the like-minded states in the region and the world.

So, the big question in 2016 will be whether the United States and Europe, including Russia, can collaborate with states in the region as well as positive and legitimate regional actors, such as much of the Syrian opposition, the Palestinian Authority, and the Iraqi Kurdistan Regional Government, to resolve or at least to mitigate these conflicts. So far we have had mixed results at best.