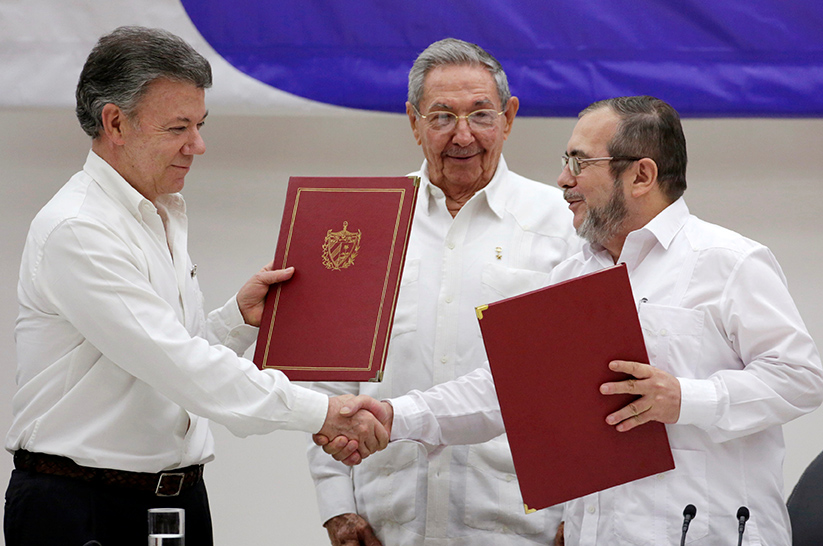 Colombia is at the brink of a historical moment. With the conclusion of peace negotiations in Havana on August 24, the country is on the verge of signing an accord with the Revolutionary Armed Forces of Colombia (FARC). Important steps must be taken before Colombian President Juan Manuel Santos and FARC leader Rodrigo Londoño, known as Timochenko, can officially sign the peace deal. Congress must call for the deal to be put to the Colombian people in a plebiscite. The FARC still needs to hold its tenth conference, a crucial meeting at which FARC members will likely ratify the accords. Nevertheless, August 24 marks the day Colombia took the leap to end more than sixty years of internal armed conflict. As a Colombian, I know what this means for my country.

Once approved, the biggest challenge of the post-conflict era will be the implementation of the deal. This unquestionably includes the effective reintegration of former combatants, as well as the reparation, guarantees of the right to truth, and support for the victims of the conflict. It also includes the management of spoilers—the ELN (National Liberation Army) and the paramilitary elements (BACRIMs or criminal gangs)—that continue to harm the Colombian society.

If the terms of the peace deal are implemented in full, the country will face significant reforms. Major investments will be made in the countryside in accordance with the agrarian reform commitments that are part of the deal. Political structures will undergo significant changes with the incorporation of the FARC as a political actor. Traditional political elites will have to make way for new players, and political disagreements will now need to be resolved through dialogue rather than armed confrontations.

In addition, the part of the agreement that addresses the drug problem will force changes to the anti-narcotics strategy Colombia has used for decades. For instance, the government will now put in place a thorough crop substitution program that will be accompanied by investments in education, health, infrastructure, and others in the areas previously affected by the conflict.

The conclusion of the peace process will enhance Colombia’s stature on the world stage. The country could become a favored destination for foreign direct investment. An agreement will hopefully accelerate Colombia’s accession to the Organization for Economic Co-operation and Development (OECD), as well as its consideration as a new member of the Trans-Pacific Partnership trade agreement. What is more, Colombian institutions will be strengthened and the country will gradually reap the dividends of peace.

Colombians should take pride in knowing that for the first time in more than six decades we finally have the opportunity to live in peace. The issue of amnesty continues to be one of the main concerns of people skeptical of the peace process. To them, it is incomprehensible that FARC members who have committed atrocities will not serve jail time. Understandably, even though the peace agreement abides by international humanitarian law and human rights treaties, it is not a simple choice to make.

With the appropriate inclusion of civil society actors, including women, indigenous, and Afro-Colombian groups, transitional justice efforts can succeed. These groups represent some of the main victims of the conflict and know from experience what it means to be resilient, what it really means to forgive, and how best to reconstruct our damaged social fabric.

We owe it to the future of our country to leave political divisions aside and think about the generations to come. Let us give them the opportunity to avoid the suffering that millions of victims have experienced. The signing of the peace deal will only be the starting point for this new Colombia, not an end point.

Andrea Saldarriaga Jiménez is a program assistant in the Adrienne Arsht Latin America Center at the Atlantic Council. She is on Twitter @andreasaldaj.