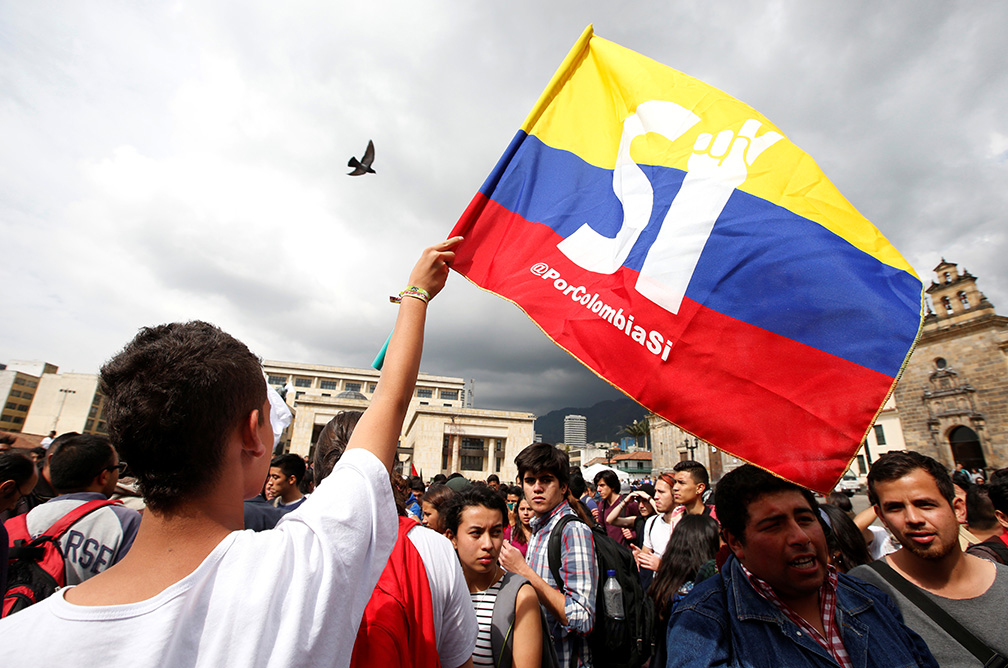 On October 2, Colombians rejected the peace agreement brokered between the government and the Revolutionary Armed Forces of Colombia (FARC). The “no” vote won the plebiscite by less than 0.5 percent of the vote with only 37 percent of voter participation. The world is shocked and Colombians astonished.

Polls leading up to the plebiscite had predicted a two-to-one margin victory for the “yes” camp. The international community was confident Colombians would vote for peace. Both the “yes” and the “no” coalitions thought the outcome was certain in favor of “yes.”

Election day brought some surprises. Hurricane Matthew hit the northern coast of Colombia affecting more than 14,000 people and resulting in 70-80 percent abstention rates in a part of the country that would have predominantly voted “yes.”

The fact of the matter is, however, that after fifty years of war, most Colombians are apprehensive about what peace would mean. The plebiscite results are an expression of three important actualities.

The electoral results map shows Colombia split in two. “No” won with 50.2 percent of the vote. This means that almost half of those who voted support the peace agreement. The campaigns—“yes” led by President Juan Manuel Santos and “no” led by former President Alvaro Uribe—leading up to the plebiscite had been divisive. Advocates in both camps presented the “yes” vote as pro-peace and “no” as anti-peace; “yes” as pro-Santos and “no” as pro-Uribe or anti-establishment. The plebiscite is thus the result of a polarized country turning up at the ballot box.

More importantly, the result shows divergent voting patterns between the center and periphery of Colombia. Central and traditionally wealthier states tended to vote against the agreement, while the poorer states voted in favor of peace. This is, in some ways, another expression of the inequalities in a country with one of the world’s highest Gini coefficients [Editor’s note: The Gini coefficient is the most commonly used measure of inequality.].

Similarly, throughout war-torn communities such as Bojayá, Mitú, and many others around the country, residents largely voted “yes,” while parts of the country with fewer victims mostly believed the deal was too lenient and should be renegotiated to include harsher punishment for the guerillas.

This is both discouraging as well as inspiring. If victims of massacres are willing to forgive the FARC, why are many other Colombians not ready to do the same?

Many Colombians don’t think that the FARC should be allowed to participate in politics. They believe that criminals should be in jail and not in government. While that is a fair argument, the reality is that no FARC member would be willing to negotiate peace if they knew they were going to jail. Many “no” supporters focused their campaign on the possibility that former guerrillas could win seats in Congress. Fighting against this possibility, opposition supporters have called for a renegotiation of better terms on this issue. The question is whether that is viable.

Colombians need to remember that the FARC did not come to the negotiating table a defeated party. As such, it was able to negotiate terms and push for compromises.  Wouldn’t it be better to have the FARC fighting with ideas rather than with guns? This consideration must be kept at the heart of any peace-making initiative.

The assassination of Jorge Eliécer Gaitán in the streets of Bogotá on April 9, 1948, was the spark that set off the long-running war in Colombia. Gaitán, a political leader who was considered the champion of the people, used to say that the political country is not the national country. When he proclaimed this, he referred to the disconnect that exists between the political class and the poor and unprotected portion of the population. The plebiscite’s results reflect this disconnect. While the political leaders will now come together in Bogotá to discuss the way forward, the victims and the people in the countryside that expect this agreement to bring about much needed reforms must watch from the sidelines.

The political elites need to remember that this agreement has the potential to change the lives of the Colombian people. Consequently, they should bring recommendations to the table as soon as possible.

Amidst the uncertainty created by the rejection of the peace deal, one thing is clear: neither camp expected this result and thus both sides have few tangible recommendations for how to move forward. The government and the opposition are mobilizing as fast as they can because they know time is of the essence, but they are also making calculations for the presidential elections in 2018.

What is the way forward?

Both the government as well as the opposition have named three representatives to start a national dialogue and move the peace process forward. There is speculation about changes in Santos’ cabinet as a way to breathe “a breath of fresh air” into a debilitated government. The minister of education, Gina Parody, resigned on October 4. There is no doubt that the opposition will enter these negotiations with the advantage of a weakened Santos administration. However, Uribe has thus far only proposed amnesty for lower-ranking FARC members, a concession which was already part of the agreement. The “yes” camp will demand that the opposition present concrete recommendations on how to address those parts of the peace agreement with which they disagree.

Other topics likely to be brought to the table by the “no” camp include special treatment for individuals and the armed forces within the transitional justice framework, jail time for higher-ranking FARC members and no political eligibility, and consideration of drug-related crimes as crimes that cannot be amnestied. These demands sound reasonable from the “defeater’s perspective”, but the reality is that the FARC is not defeated. It is, therefore, unlikely to abide by such terms. Victims would also be wary of touching a transitional justice framework they helped build in the first place. Finally, it would be dangerous to give special treatment to some actors of the conflict because that would place the burden of truth on the FARC. Although there should certainly be one, the responsibilities are shared by all actors in the conflict, including the Colombian state.

As in many other times in its history, Colombia is at a crossroad. It is crucial for its political leaders to show true leadership and selflessness, leave behind old rivalries, and put forward solutions that will finally leave Colombia united and at peace.

Andrea Saldarriaga Jiménez is a program assistant in the Atlantic Council’s Adrienne Arsht Latin America Center and is originally from Bogotá, Colombia. You can follow her on Twitter @andreasaldaj.

Image: Supporters of the peace deal signed between the Colombian government and the Revolutionary Armed Forces of Colombia (FARC) guerrillas held a rally in front of Congress in Bogotá, Colombia, on October 3. The deal was narrowly rejected in a plebiscite on October 2. (Reuters/John Vizcaino)