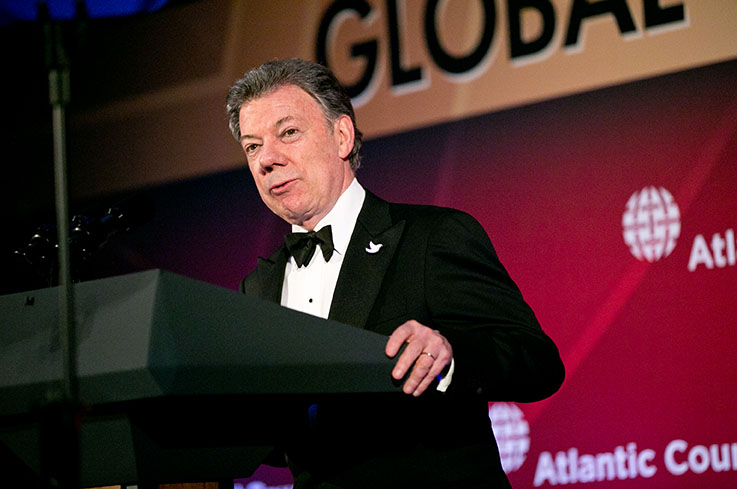 Colombia’s President, Juan Manuel Santos, wholeheartedly believes that his attempt to end the Western Hemisphere’s longest-running war will bear fruit, the big challenge, however, will be convincing Colombians that “peace is going to be marvelous.”

“Most Colombians have never seen one single day of peace… They think peace might be bad,” Santos said in Washington on February 3. He compared this terrified reaction to that of a prisoner who is to be released after spending decades behind bars. “We have to teach them that…It is much better to have peace than it is to have war,” he added.

Santos spoke at an event that was jointly hosted by the Atlantic Council’s Adrienne Arsht Latin America Center, the Council of the Americas, the Inter-American Dialogue, the United States Institute of Peace, and the Wilson Center.

The Colombian people will vote in a referendum on the peace deal Santos struck with Timochenko, the leader of the Revolutionary Armed Forces of Colombia (FARC), in Havana, Cuba, in September of 2015. A six-month deadline was set to sign a peace accord.

Santos, who described the breakthrough in negotiations with the leftist guerrillas as an “irreversible moment,” said he was confident that a peace accord would be signed on or around a March 23 deadline.

Bernie Aronson, the US Special Envoy to the Colombia Peace Process, shared that optimism. “I think there is a real prospect for success and signing of the peace accord this year—hopefully within the first half of the year,” Aronson said in a phone briefing with reporters this week.

Around 225,000 Colombians have been killed and six million others displaced from their homes by a war that has lasted more than fifty years. Santos’ critics, including his predecessor Alvaro Uribe, have accused him of giving away the store in his negotiations with the FARC.

Acknowledging that certain elements of the deal, when considered in isolation, are unpopular, Santos said that when the package is considered in totality “an overwhelming majority will vote yes.”

The Colombian government has agreed to focus on development in rural areas, where the FARC has its support base; enhance political participation; work jointly with the FARC to combat drug trafficking—Colombia is the number one provider of cocaine to international markets; and provide justice to the victims of the conflict.

The Santos government and the FARC are currently focused on what Aronson described as end-game issues: negotiating a deal on disarmament, demobilization, and reintegration into society of the former guerrillas.

The Atlantic Council bestowed its Global Citizen Award on Santos in 2015 in recognition of his commitment to peace.

Santos’ agenda in Washington underscores the depth of the US-Colombia relationship. The Colombian President will meet US President Barack Obama and US Vice President Joe Biden on February 4, and US Secretary of State John Kerry on February 5. The meetings will focus on a central theme: the status of the peace process and future US support for Colombia.

Adrienne Arsht, an Executive Vice Chair of the Atlantic Council, asked Santos what more the United States can do to help him implement the peace accord. Santos noted that Obama has been supportive of the peace process from the very beginning and that the US envoy, Aronson, has been “extremely effective.”

He also plans to discuss with Obama how the United States and Colombia can work together to fight organized crime and the menace of the mosquito-borne Zika virus, which the World Health Organization has declared a “public health emergency of international concern.

The US-Colombia relationship has, for the past fifteen years, come to be symbolized by Plan Colombia—a US military and diplomatic effort aimed at fighting narcoterrorism and guerrilla groups like the FARC. The US has provided almost $10 billion in aid to Colombia under this plan.

The Obama administration will request Congress to increase bilateral assistance to support Colombia’s efforts to implement the peace accord with the FARC as part of the strategy that “refocuses our engagement,” Roberta Jacobson, Assistant Secretary of State for Western Hemisphere Affairs, said in the phone briefing with reporters. This engagement will be focused on three pillars: security, including counternarcotics, demobilization of FARC fighters, and demining; expanding state presence in public institutions and strengthening those institutions; and on justice and assistance for victims of the conflict.

Colombia, much like other oil-dependent economies, has been hit hard by the decline in global oil prices. Within the constraints created by this climate, the Santos administration has made fiscal responsibility a priority, invested in infrastructure, and focused scarce resources on areas where economic and social impact can be seen.

If a peace deal sticks, it will set the stage for the Colombian government to undertake more such development with the support of the former rebels. But why have previous attempts to make peace with FARC failed while the latest one appears destined to succeed? Santos credited multiple factors, including the development of a military strategy “that would take us to the negotiating table.”

Previously, the FARC thought it could win the war, the President said. Plan Colombia helped tilt the balance. Colombia used the aid to build its military, especially its air capabilities and special forces, and bolster intelligence. “The commanders of the guerrillas learned the hard way that it is better to negotiate otherwise they will end up in a jail or in the grave,” said Santos.

Another critical factor was a change in the attitudes of Colombia’s neighbors, some of whom, particularly Venezuela, had long supported the FARC. Santos credited his approach of “American pragmatism in diplomacy”—marked by reaching out to Colombia’s neighbors—with bringing about this shift.

‘Peace with no impunity’

Santos has expended significant political capital as a result of his decision to negotiate peace with the FARC. Addressing his critics, he said the negotiated peace agreement will guarantee “peace with no impunity.”

“There have been questions about how much justice are we sacrificing,” said Santos. “This is always the most difficult question in any negotiation of this sort. Where do you draw the line between peace and justice? And you will always find people who are not satisfied with whatever decision you take. Some people want more justice, others want more peace.”

However, the most important aspect of the negotiations is that the victims’ rights to truth, reparation, and justice were put front and center for the first time, the Colombian leader said. “I thought that the victims were going to be the most troublesome in terms of where you draw the line between peace and justice,” said Santos. “Well, I learned a very important lesson: I was wrong. The victims are the most prone to forgive, to reconcile; they don’t want others to suffer what they suffered.”

Human Rights Watch has said the peace deal “contains a web of ambiguities, omissions, and loopholes that could be used to ensure that those most responsible for atrocities on both sides of the conflict escape meaningful punishment.”

Santos addressed this criticism head on.

“We have enough justice to comply with all these international standards and at the same time allow us peace,” said Santos.

Image: Colombia’s President, Juan Manuel Santos, seen here accepting the Atlantic Council’s Global Citizenship Award in New York in October of 2015, said in a speech in Washington on February 3 that he is confident that a majority of Colombians will eventually support his peace deal with leftist guerrillas. (imagelinkphoto.com)