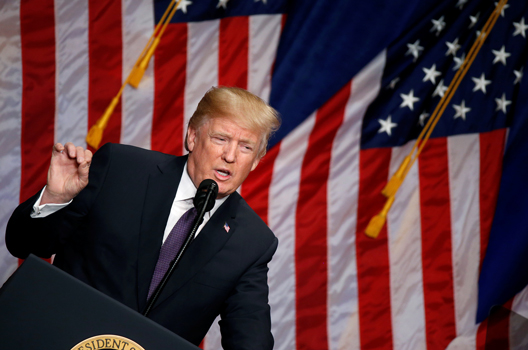 While US President Donald J. Trump’s new national security strategy (NSS) solidifies his campaign rhetoric into the fundamentals of foreign policy, it also sets forth a surprising degree of continuity from the approaches of previous administrations, according to a former US national security advisor.

“The threats we face have a lot of continuity [with] the same threats we’ve been facing over the last decade,” said Stephen J. Hadley, executive vice chair of the Atlantic Council’s board of directors and founding partner at RiceHadleyGates. Therefore, he added: “there is a lot of continuity in [the new NSS] because American interests have not really changed, basic friends and allies have not changed.”

Overall, said Hadley, who served as national security advisor to former US President George W. Bush, “I thought the document was pretty good.”

On December 18, the administration released its new NSS, focused on the protection and promotion of US interests, and informed by Trump’s “America First” mantra. The NSS is structured according to four fundamental pillars: protecting the US homeland, promoting US prosperity, preserving peace through strength, and advancing US influence abroad.

The priorities, said Hadley, are informed by a recognition of the return of “ideological competition” to the world stage. “There is [an] undermining [of] the American principles of democracy and freedom by states overseas,” he said, adding: “Power now matters and geopolitics have returned front and center.”

The distinction between Trump’s NSS and those of his predecessors, according to Christine Wormuth, director of the Atlantic Council’s Adrienne Arsht Center for Resilience, is the perception of “a darker world view.” She described the document’s focus on “competition not just with our adversaries or strategic competitors…but also there is an emphasis on competition amongst everyone.”

“International institutions are fine,” said Hadley, “but at the end of the day it is strong sovereign states that control their own territory.”

Prior to the official release of the document, Trump delivered a speech outlining its contents, though his description and the substance of the NSS itself varied on points of emphasis. For example, said Hadley, “he didn’t talk a lot about the sort of nefarious activity of Russia in his speech. He didn’t talk about China either.” However, Hadley added: “If you look through the document, there’s a lot of discussion about the problems posed by China and Russia.”

The document, he said, is indicative of Trump’s prioritization of security threats. It focuses on rival powers such as Russia and China, as well as US economic influence as a security tool. Notably absent is the mention of climate change as a national security threat, a departure from the Obama administration’s NSS.

Here are their key takeaways:

1. China: “We’re going to deal with the problems that China presents, clearly, head-on, but at the same time, we’re going to try to cooperate where it’s in our mutual interest to do so.” (Hadley)

Throughout the document China is characterized a rival power that threatens US economic interests abroad, yet also as a potential partner in mitigating the security crisis with North Korea. However, in the latter regard, Beijing has failed to pull its weight, heightening tensions with Washington. According to Wormuth, “the more hard-nosed approach to China in many ways is about what we need right now.” She said she is “pretty comfortable” with the NSS characterization of China as a competitor. Yet, according to Hadley, there remains a degree of necessary balance. “The relationship with China is going to be characterized by both collaboration and competition at the same time,” he said, adding: “We are not going to be unwilling to compete in order to enhance our prospects of collaboration.”

2. Russia: “The document itself is very tough on Russia.” (Wormuth)

Though Trump made few references to the threats posed by Russia in his speech, the NSS itself reveals a revitalized US stance vis-à-vis the Kremlin. “If you look at the Russia policy that is in place,” said Hadley, “it is quite tough on Russia.” Sanctions passed by the US Congress and the ongoing investigation into Russian interference in the 2016 US presidential elections demonstrate the US preoccupation with countering Russian aggression. However, Wormuth cautioned, “the one thing where [the document] is not directly tough on Russia is all of the references to the use of cyber against the United States.” She added: “I think it would be healthy given the extent of the interference to see a more specific taking on of that issue.”

In the wake of Trump’s withdrawal from the Paris Climate Accord and reversal of Obama-era environmental protection legislation, the new NSS failed to label climate change a significant national security threat. However, said Hadley, “there is a lot of emphasis on energy and the potential that the growth of shale oil and shale gas production in the United States offers geopolitically.” The NSS includes a mention of the importance of environmental stewardship while encouraging the use of US fossil fuel sources.

4. Innovation and Technology: “I think it is useful that this administration seems to be clear that it wants to continue the emphasis and the outreach to the technical community because these asymmetrical threats that we are facing are going to require those kinds of solutions that are only going to come from the technical, scientific, and engineering communities.” (Hadley)

In the face of hybrid warfare and non-state actors threatening western security, innovative approaches to protecting US interests are essential. The NSS outlined the importance of innovation and entrepreneurship “that really is a huge strategic advantage of the United States,” said Hadley. He described how this focus on innovative national security tools “rarely…appeared so prominently in earlier national security strategies.” The document focuses explicitly on both space and cyberspace in this regard, said Hadley, “two new domains that are in great demand [as] potential areas of competition and, quite frankly…areas where we may have fallen behind a little bit in terms of what China and Russia are doing.” In order to address the innovation gap, the NSS included “references to wanting to try to bring in people with scientific and technical and engineering backgrounds into places like the [US] Department of Defense and other parts of government,” said Wormuth. She described how “there was clearly a recognition of the need to bring in more of that expertise.”

5. Budget: “The right approach…is to write a strategy document that is not resource-constrained that makes very clear the challenges we face and what we need to do about them, and then use that as a platform to go to the Congress and say we’ve got to resource this.” (Hadley)

Trump set forth the NSS without financial restrictions or allocation of funds. Consequently, said Wormuth, “I have big concerns about the administration’s ability to resource this strategy.” However, Hadley said, setting out a prioritization of concerns will then allow the administration to structure a budget accordingly. “The purpose of strategies are to help guide the allocation of activities and resources toward achieving the goals,” said Pavel. While Hadley described how Trump plans to end budget sequestration and mobilize the private sector, “the president made it clear that he expects a lot of the resourcing to come from our allies [who] have not done enough to fund our common security.”

Overall, many of the themes within the document “are themes that [Trump] has struck in speeches that he’s made over the first year,” said Hadley. In that way, the NSS is in keeping with Trump’s consistent theme of “America First,” and reinforces the foreign policy approaches laid out within the first year of the administration.

According to Hadley, “we’re going to call it like we see it about what’s the environment and what the strategies we have to pursue in order to succeed and advance American interest in that environment.”