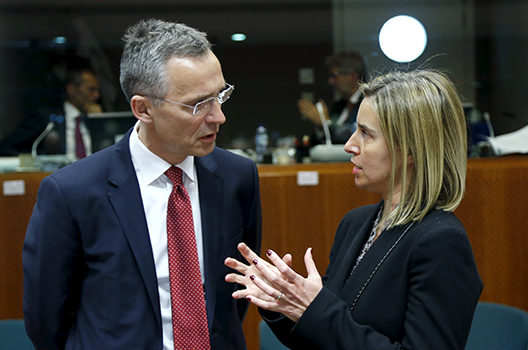 Despite the current political tension in the transatlantic bond, the facts on the ground for NATO’s summit in Brussels on July 11 and 12 could not be better. After years of calls from the United States for more defense investment, NATO allies have been responding ever more credibly to meet the rising threats in the east and the south, independently and together. Favorable economic winds are increasing defense budgets for allies in Europe and Canada for the fourth consecutive year, and NATO defense ministers recently agreed to the “Four Thirties” initiative to bolster the Alliance’s military readiness. Meanwhile, a wealth of new initiatives to boost capabilities and readiness are growing in Europe, providing promising European answers to European challenges. NATO leaders – and the United States in particular – should contemplate how to support and complement these European programs, rather than nip the buds before they blossom.

First, credible military readiness and posture cannot be allowed to suffer from old infrastructure or cumbersome administrative procedures. The European Union (EU) has put forward a Military Mobility Action Plan, underpinned by a budget proposal of 6.5 billion euros, to simplify the moving of military forces and shorten border crossing times for troops. This will be achieved with the help of twenty-four EU member states under the military mobility Permanent Structured Cooperation (PESCO) project, which is led by the Netherlands.

These efforts will complement the “Four Thirties” initiative. This will not be enough, however, to overhaul infrastructure in twenty-eight EU member states—twenty-two of which are also NATO allies. Further pledges for investment will have to be secured at the NATO summit from allies and Partnership for Peace nations.

The EU’s budget proposal for military mobility will create the right incentive for nations to invest, but national commitments will have to be sealed together with the right implementation to facilitate a cultural shift in Europe. Transport ministries and other stakeholders will need to work more closely with military staff to ensure military requirements receive the attention they need and are included in a comprehensive government approach.

Second, tanks will have to be transported from France to Poland on trucks and railway tracks, and not drive there themselves. Very few allies have the means to move a variety of forces efficiently across Europe today, but opportunities to strengthen such capacities are growing in and around the Alliance. NATO should not shy away from supporting any European initiatives to secure greater strategic lift capacity, and PESCO and the European Defence Fund could provide fruitful frameworks, despite being outside traditional Alliance structures and control.

Anchoring such projects within European-specific structures and context would not only ensure greater sustainability and long-term planning, but could also create more buy-in for higher defense budgets with European politicians due to local job creation and a bigger sense of responsibility.

With PESCO and the European Defence Fund originally conceived as a way for Europe to develop strategic lift capability for taking European forces overseas to EU stabilization missions or refueling fighter jets in the field, it would only be natural to extend this thinking to moving forces within Europe, too. NATO could, therefore, benefit from encouraging EU allies to commit to such projects and promoting the integration of non-EU allies in regional cooperative frameworks such as the Nordic-Baltic region.

Finally, credible readiness and posture in Europe requires a more common strategic culture. With its lean setup, French President Emmanuel Macron’s new European Intervention Initiative (EII) can help grow a strategic community that can foster more of the necessary will, capability, and culture of doing something and doing it together. The Very High Readiness Joint Task Force (VJTF) already stands as a prime example in the east, and a similar initiative should be welcomed for the south— as a place to connect members of different organizations into a stronger, more capable European family that will strengthen NATO, the EU, and the security they provide together.

At the same time, while EII could close a leadership gap in the European southern posture toward North Africa and the Sahel, where NATO would be reluctant to enter into operations, it is also important that forces committed to the EII be available for the eastern flank should the need arise. NATO must be careful about assigning the same forces to multiple formations—for example, committing the same regiment into the VJTF, the “Four Thirties,” and the EII—without proper military contingency planning and political reflection about what to do in case of conflicting crises.

Even so, it is difficult to see how a stabilization mission in Libya and an opportunistic border push by Russia would require exactly the same troops, vehicles, and responses. While some overlap might occur, such concerns should not keep Europe away from doing more to provide security in its neighborhood, nor should it keep the United States and other allies from supporting these measures since the EII will supplement Europe’s contribution to NATO’s overall readiness and capability in the medium and long-term.

NATO leaders should utilize their upcoming summit to welcome the new European initiatives and encourage more, even if the planets are not yet fully aligned. As a political project, a stronger Europe, capable of joint and autonomous action in defense of shared security interests, is in everyone’s interest. Done well, this would strengthen, not threaten, the defense partnership with the United States because it has the potential to deliver more European capabilities, more synergy, and more impact on the ground.

Europe will have to deliver tangible successes with these projects in the coming years, and there will most likely be stumbling blocks on the way to operational impact. But NATO leaders should not nip the buds in the European garden before they bloom. Instead of fighting these initiatives, leaders should back such projects toward greater levels of European autonomy, while also closely aligning these with NATO, the United States, and post-Brexit United Kingdom to boost readiness in Europe and turn Europe’s strategic autonomy into a strategic gain for the transatlantic alliance.