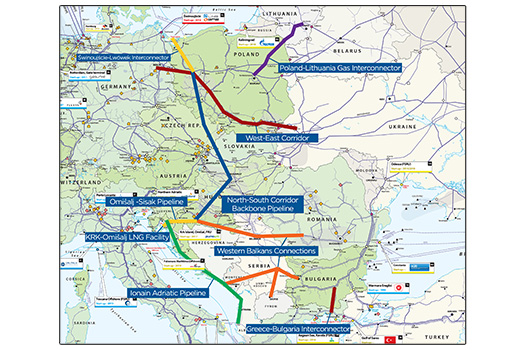 Twenty-five years after the collapse of the Berlin Wall and the beginning of a long process of European reunification, Europe has arrived at a historic inflection point. The European Union faces multiple external threats, including a resurgent Russia, growing global economic competition, and geopolitical upheaval.

Eleven years ago, nations that once lived behind the wall’s ideological divide have joined the EU to the benefit of the whole continent and the transatlantic alliance. Yet Europe’s economic and infrastructure integration remains incomplete. Gas pipelines, power lines, roads, railroads, and communications links remain patchy in Central and Eastern Europe—the legacy of a half-century of Soviet-dictated development. Moscow built up the East-West infrastructure but failed to develop or deliberately blocked intra-regional integration to keep the Warsaw Pact countries dependent on the Kremlin.

The EU’s resilience is at stake, threatening the transatlantic community. Economic growth and energy security are backbones of that resilience, but both are weak spots in the chainmail of Europe. A study published by the Atlantic Council and Central Europe Energy Partners and co-chaired by Paweł Olechnowicz, Chairman of the Board of Directors of Central Europe Energy Partners, and retired Gen James L. Jones, Jr., former US National Security Advisor to President Barack Obama, presents a roadmap to address the missing infrastructure links in Central and Eastern Europe.

The study advocates constructing a North-South Corridor of energy, transporation, and telecommunications to connect the Baltic Sea to the Adriatic and Black Seas.  By binding together the economies of Central Europe and linking the region with Western Europe, the North-South Corridor would provide the infrastructural foundation necessary for a single European market.  By diversifying sources of energy, it would enhance the continent’s energy security. By increasing the efficiency of cross-border transactions, the corridor would strengthen global competitiveness and the economic resilience of Europe as a whole, and contribute as well to the achievement of Europe’s climate goals.

The study was formally launched last November at the Atlantic Council’s Energy and Economic Summit in Istanbul, and introduced in March to European institutions in Brussels and in April to US decision-makers in Washington. It proposes seven key sets of recommendations for policy-makers and the business community on both sides of the Atlantic to accelerate the corridor’s completion.

1. First and foremost, the European Commission (EC) should embed this priority into its key policy and budgetary directives and initiatives.

2. The North-South Corridor should be approached holistically, guided by a vision that integrates gas and oil pipelines and infrastructure, electricity interconnections, rail and road networks, and telecommunications investments. As a key artery in Europe’s economy, the North-South Corridor will have greater impact if it takes advantage of the intersection and overlap of these various pipelines, links, and networks.

Focusing EU resources on key corridor connectors would demonstrate the viability of the North-South Corridor as a whole, and thereby generate additional funding from national governments and commercial entities. In addition, Central European governments should consider creating a €1 billion regional investment fund that pools resources to complement EU funding.

4. As outlined above, infrastructure connectors whose acceleration and completion are most critical to completing the North-South Corridor and integrating Central Europe with the rest of the EU should be a priority. Focusing on the corridor’s most urgent missing links and bottlenecks is the best way to accelerate the project and to demonstrate its commercial viability.

5. The European Central Bank (ECB) should permit limited exceptions to national budget restrictions when funds are to be spent on cross-border projects involving two or more member states.

6. The North-South Corridor should be a key element of the US-EU agenda. An economically prosperous and integrated Europe with resilient energy security will be a more capable partner in an age of increasing global turmoil. The United States should use both its newfound energy prowess in oil and gas to help bring focus and unity to the often politically charged and controversial resource decisions that are an inevitable part of vast and complex multinational projects, and help create the preconditions for real energy supply diversification.

7. A North-South Corridor Forum should be established to foster regular consultations and generate awareness, interest, funding, and political and commercial support. Operating as an independent platform chaired by countries along the corridor on a rotating basis, convened regularly at senior and working levels, the forum would coordinate intergovernmental collaboration among countries along and adjacent to the corridor, as well as US and EU representatives, and engage the business community for advice and innovation.

The vision of a Europe whole, free, and at peace is under pressure from within and outside its frontiers. The North-South Corridor is of utmost importance for Europe’s security and competitiveness. Implementing these recommendations would provide the necessary boost for the corridor and European market integration and economic growth, while enhancing Europe’s resilience. Accelerating the corridor’s completion should therefore be both a European and a transatlantic priority.

David Koranyi is the Director of the Atlantic Council’s Eurasian Energy Futures Initiative.

Ian Brzezinski is a Resident Senior Fellow at the Atlantic Council’s Brent Scowcroft Center on International Security. He leads the Brzezinski Group.