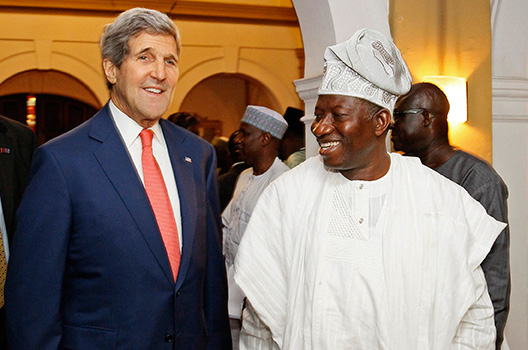 The fact that the militant group Boko Haram controls vast swaths of territory in northeastern Nigeria will likely disenfranchise voters and has elevated the danger of post-election violence, according to Atlantic Council analysts.

“Because of insecurity in the northeast, one party may believe that its supporters may not have had the opportunity to support them, and in a close election that could call into question the electoral outcome,” said Robert Lloyd, nonresident senior fellow in the Atlantic Council’s Africa Center.

Lloyd, who was part of a joint National Democratic Institute-International Republican Institute pre-election assessment mission to Nigeria this month, said the presidential election on February 14 will be “very competitive.” The election is widely expected to be the closest since Nigeria transitioned from military rule in 1999.

“The question is would the loser reject an unfavorable outcome,” said Lloyd.

“The insurgency in the northeast, the threat of terrorist attacks, and the hundreds of thousands, if not millions of people, who have been displaced by the terrorist attacks, will make it very, very difficult not to disenfranchise a minority of the population,” said Pham.

“The problem is, in a tight race all the elements are there for a sore loser to question the legitimacy of the result,” he added.

Boko Haram, which is fighting to establish an Islamic state in Africa, reportedly controls 20,000 square miles of territory spread across Nigeria’s northeastern states of Borno, Yobe, and Adamawa.

While the geographic area affected is vast, the population in this region is relatively small.

Of Nigeria’s population of 180 million, only 10 million live in the three states where Boko Haram is most active, said Pham.

A minority of Nigerians will be disenfranchised, “but the problem is in a tight race who is to say how those people would have voted?” he said.

Pham said it was not clear that disenfranchising voters benefits any one candidate.

Eleven of the fourteen presidential candidates, including the top two — President Goodluck Jonathan and Muhammadu Buhari, a retired major general who ruled Nigeria from 1983 to 1985 — have signed the Abuja Accord, which commits them to running issue-based campaigns and refraining from violence during and after the election.

Nevertheless, Lloyd said the prospect of post-election violence is a very real concern.

Nigeria has a history of violent elections. In 2011, Buhari’s loss to Jonathan was followed by three days of rioting in which more than 800 people were killed and 65,000 displaced.

The Obama administration is concerned that a similar scenario would undermine the stability of Africa’s top oil producer and set back efforts to fight Boko Haram.

US Secretary of State John F. Kerry traveled to Lagos, Nigeria, on January 25 to warn against election violence.

“Given the stakes, it’s absolutely critical that these elections be conducted peacefully, that they are credible, transparent, accountable, so that the people of Nigeria can have faith and the world can have faith in the government that flows from it,” Kerry said.

While the candidates have pledged nonviolence, Boko Haram is expected to escalate attacks, which have been marked by suicide bombings.

The Nigerian government also faces the challenge of ensuring that people displaced by Boko Haram’s attacks get a chance to vote and that voters receive and are familiar with the new biometric voter cards, said Lloyd.

“The electoral commission is trying to reach out to as many voters as possible,” he added.