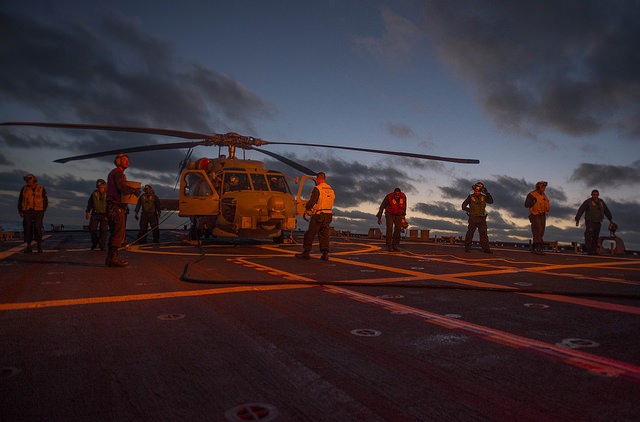 US Navy sailors aboard the littoral combat ship USS Fort Worth, clear the deck of potential debris before launching a helicopter, October 28. The Fort Worth is this month helping in the search for remains of the missing AirAsia Flight 8501, part of a broadened mission outlined by Sean Stackley in his Atlantic Council address. (US Navy/ Tim D. Godbee)

The Congress must roll back limits on US defense spending, particularly in light of the heavy investments countries such as China and Russia are making in their navies, according to Sean J. Stackley, the assistant secretary of the Navy for research, development, and acquisition.

“Other navies are making significant investments in their war-fighting capabilities such that the maritime superiority that the US has long maintained cannot be assumed in the decades ahead,” Stackley told an audience at the Atlantic Council on January 7.

Stackley described China’s investment in naval capabilities as “particularly impressive” and said Russia, too, is revitalizing its blue-water navy capabilities.

Stackley made a pitch for reversing the legislative threat of defense spending cuts.

“All of our efforts to improve efficiency are for naught if we do not address that most immediate legislative threat inside our horizon — sequestration,” he said.

“My response to Congress is don’t give us more, give us less in terms of legislation,” he added.

A survey in December  by two Washington consulting groups found that a majority of US voters are in favor of ending sequestration, which imposes limits on government spending.

Top Pentagon officials have been making a pitch to prevent the recurrence of spending caps, which could return in October.

“When dealing with this uncertainty, time clearly is our enemy, and inaction could be deadly,” said Stackley.

“We broadly agree on the challenge, its complexity, and the types of action needed to improve our course,” said Stackley.

“We need precious little new legislation that would trigger added bureaucracy to respond to new requirements levied against an already byzantine process. My prayer for relief, much in line with NDIA’s recommendation for a zero-based review, is that the Congress will first consider rolling back passed legislation that encumbers our ability to do our jobs,” he said.

Besides the Budget Control Act, Stackley listed two other threats that he said keep him awake at night:

Stackley spelled out the growing demands on the Navy, including maritime security, forward presence, crisis response, and strategic deterrence. “In fact, on any given day since 9/11, nearly half of our fleet has been underway and of that number 100 ships have steadily been on deployment,” he said.

“The demand for naval presence has risen as the Navy has taken on greater responsibility for missions ranging from sea-based missile defense first in the Sea of Japan, more recently in the Eastern Mediterranean, to anti-piracy in the Indian Ocean, and humanitarian assistance wherever disaster occurs, most recently marked by the role of the Aegis destroyer USS Sampson and the littoral combat ship USS Fort Worth in the search for the remains of AirAsia Flight 8501,” he added.

Stackley said maintaining US naval superiority demands superiority in technology, science, and engineering. “We cannot simply spend our way out of this situation,” he said.

“Today’s pressure on the budget is not going to decline, but neither will the demand for increasingly capable weapons systems, which bring added costs. So right alongside range and speed and payload and power, affordability has become a compelling requirement,” he said.

“More than merely establishing cost caps we are leveraging every tool in the toolbox starting with the way we define requirements, conducting trades between capabilities and costs, leveraging mature technologies, maximizing competition, putting a block on stability in our programs so industry can plan, invest, and produce more efficiently, and leveraging multi-year contracts to reduce our costs,” he added.