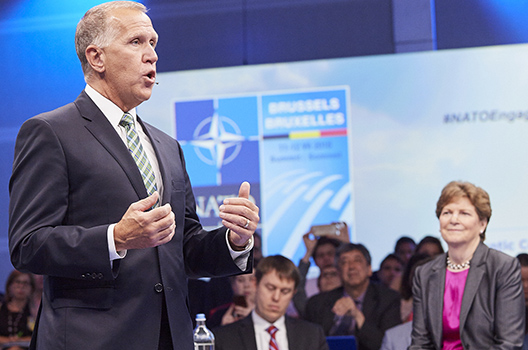 With concern rising on both sides of the Atlantic about Washington’s commitment to the transatlantic alliance, NATO’s newest champion is also one of its oldest supporters: The United States Congress. On August 1, a group of twenty US senators met privately with NATO officials and ambassadors from allied governments to make clear that the American legislative branch remains committed to the United States’ involvement and leadership in NATO.

At a time when the White House has aggressively pushed NATO allies to spend more on defense – and suggested that American involvement in NATO could be dependent on increased allied commitments – members from both sides of the aisle in Congress have increasingly voiced their unified support for the transatlantic alliance.

Amidst concerns about the threats President Trump would make at the July 11-12 NATO Summit in Brussels, the United States Senate passed a resolution on July 10 supporting NATO by a margin of ninety-seven to two. The next day, the United States House of Representatives passed a unanimous voice-vote on a similar resolution. Speaker of the House Paul Ryan (R-WI) was clear on the importance of the transatlantic alliance for the United States, saying, “NATO is indispensable.”

On July 12, just as reports emerged alleging that Trump had threatened to scale back NATO involvement unless allies spent beyond their 2% goal, United States Senators Jeanne Shaheen (D-NH) and Thom Tillis (R-NC) addressed a crowd in Brussels at the NATO Engages event and laid out the broad support the alliance still had among American legislators. “Congress has your backs,” Tillis told the crowd.

Back in Washington, Shaheen and Tillis worked on expanding their new Senate NATO Observer Group, which they created earlier this year on the model of an organization of the same name created in the 1990s to build congressional support for NATO eastern enlargement. By July 17, ten more senators had decided to join their group.

At a July 19 event in Washington, Tillis affirmed that should Trump or any future administration attempt to withdraw the United States from NATO, “it would create a unifying event unlike anything you’ve seen in US history.” Not content with just words, Senators Cory Gardner (R-CO), John McCain (R-AZ), Tim Kaine (D-VA), and Jack Reed (D-RI) introduced formal legislation on July 26 that would require the president to obtain Senate approval before modifying US NATO membership or withdrawing from the alliance.

When US Secretary of State Mike Pompeo visited Capitol Hill on July 25, he was bombarded with questions by the Senate Foreign Relations Committee on the extent to which President Trump was committed to the transatlantic alliance, and what effect his harsh criticisms may have on NATO’s effectiveness. In a particularly tense exchange with Secretary Pompeo, Senator Bob Corker (R-TN) questioned the wisdom of President Trump’s attacks, especially his pointed words on Montenegro and NATO expansion to smaller countries.

Congress has not rejected all of the Trump administration’s criticisms of certain NATO allies, however. Echoing President Trump’s concern about Germany’s support for a new Nord Stream 2 pipeline from Russia, congressional leaders are already pursuing legislation targeting companies that would work on building the new project. The House and Senate also agreed on a bill temporarily halting the delivery of new F-35 aircraft to Turkey, in protest to Ankara’s decision to buy a S-400 missile system from Russia.

Overall, however, congressional leaders from both sides of the aisle have spoken clearly about their continued support for the transatlantic alliance. Magnus Nordenman, Director of the Transatlantic Security Initiative at the Atlantic Council’s Scowcroft Center for Strategy and Security, noted that the recent actions and statements by members of Congress show they are “newly energized about European security and the future of NATO.” Their support has been accompanied by direct legislative action, Nordenman argued. Congress has increased annual funding for Department of Defense’s European Deterrence Initiative, which aims to increase the US military’s presence in Europe, by $1.7 billion compared to the previous year. Congress also inserted tough language on Russia and the threats to Europe in the National Defense Authorization Act (NDAA), the annual funding bill for the Pentagon.

According to Nordenman, “Congress is clearly beginning to sense out a role for itself in foreign affairs, given the turbulence we are currently experiencing with the administration.” Rather than waiting to see what the president or the administration will do or say on important foreign policy points, congressional leaders are becoming more comfortable exerting their own influence, and in no policy area more than NATO.