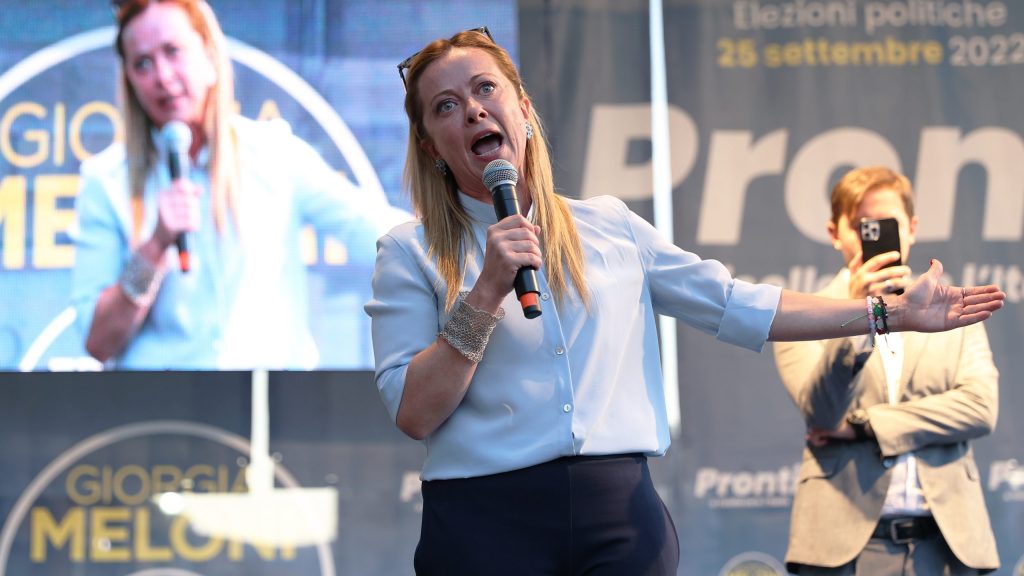 On September 25, Italian voters will elect a slimmed-down parliament in what polls predict will be a triumph for the conservative coalition led by Giorgia Meloni’s far-right Brothers of Italy party, which could win 45 percent of the vote. If the polls prove right, Meloni would become Italy’s first female prime minister and the first far-right Italian premier since World War II.

Meloni’s main challenger is former Prime Minister Enrico Letta’s Democratic Party (PD), which is currently polling at around 22 percent. Letta, who some see as a continuation of Italy’s old politics, has stated that this election will decide whether Italy will stick with the likes of France, Germany, Spain, and the European Union (EU) in general, or side with right-leaning European partners like Poland and Hungary as primary partners. With the strength of the conservative coalition, which also includes the populist League and center-right Forza Italia parties, the latter may become reality.

Either way, much is at stake for Italy, which faces a snap election at a time when the country is reeling from converging crises of inflation, surging cost of living, uncertain energy security, and the ongoing war in Ukraine.

One of the first—and most challenging—responsibilities of the incoming government will be to draft its budget law for 2023, which must be submitted to the European Commission by mid-October and approved by the end of the year. This and debt sustainability are the issues that both Brussels and financial markets are anxiously monitoring.

The current government will also leave a lot on the agenda. The next government will have its docket full with issues like tax reform, competition regulation, judicial reform, and even enacting a minimum wage—Italy is one of six EU countries without a federally regulated minimum wage, and will have to introduce one to comply with new EU law.

Meanwhile, climate change and energy solutions have surfaced as important campaign battlegrounds for the first time, especially since the new government will face a potentially volatile winter marked by Russian gas cut-offs. Candidates have prioritized discussion of economic and energy challenges, including the effects of the war in Ukraine, with both Meloni and Letta proposing measures to limit spiraling energy prices.

Anti-immigrant sentiments have also been a campaign feature, particularly after Meloni shared a video on social media of an undocumented immigrant raping a woman, for which she was heavily rebuked by her rival Letta. LGBTQ+ and abortion rights, which could face restrictions under a Meloni-led government, are also the subject of debate.

How did Italy go from technocrats to far-right populists?

Prime Minister Mario Draghi—who is credited with leading Italy out of the COVID-19 economic downturn—has largely been viewed as a figure of economic stability in Europe, thanks to his tenure as former president of the European Central Bank and his role as a vocal advocate of EU responses to the economic and energy crises stemming from Russia’s war in Ukraine. Taking over as a technocrat only eighteen months ago, he resigned in July when the anti-establishment Five Star Movement (M5S) withdrew its support from the governing coalition—accusing Draghi of failing to do enough to address Italy’s worsening economic conditions—and the League and Forza Italia followed suit.

President Sergio Mattarella had turned to Draghi early in 2021 as a steady hand outside of party politics who could lead the country out of the darker days of the COVID-19 pandemic, despite opposition from M5S, which preferred a political government. However, the collapse in July of Draghi’s technocratic government perhaps showed that  leaders cannot prevail outside of party politics.

Italy is no stranger to technocratic governments, as Draghi’s is the fourth in the past two decades. But dissatisfaction with unelected leadership has already paved the way for populists in the past: Mario Monti was similarly installed as prime minister in 2011 in the wake of the global financial crisis, but two years of public dissatisfaction gave way to a populist surge headed by M5S, which earned the highest share of votes in its first-ever national election after Monti’s government fell apart in 2013.

History now seems to be repeating itself, with the parties withdrawing support from Draghi in favor of an electoral approach to resolving the country’s challenges (Meloni and other right-wing leaders were already calling for early elections by the time Draghi resigned).

The rise of Meloni’s far-right brand

Entering conservative politics in her teens, Meloni’s popularity has skyrocketed in recent years. Her controversial views on the EU and anti-immigration positions resonated with an increasingly disaffected public, propelling her party from 4 percent in 2018 to more than 25 percent in 2022.

Meloni, 45, describes herself and the Brothers of Italy as conservatives. Individual freedom, private enterprise, educational freedom, the centrality of the family and its role in society, border protection from unchecked immigration, and the defense of Italian national identity are among the issues she campaigns on the most.

Concerns in the West about the Brothers of Italy’s roots as a neofascist party have been met with claims that fascism has been handed over to history. But Meloni doesn’t hide her admiration for autocratic Hungarian Prime Minister Victor Orbán, for instance, and also opposes gay rights, claiming that children should be raised by a mother and a father. As prime minister, Meloni says she would put up naval blockades in the Mediterranean to deter migrants, while her slogans “God, family, fatherland” and “Less Europe, but a better Europe” worry Europeans. While she appears to have embraced Atlanticism in the final days of the campaign, it’s unclear how serious she is about that stance.

While she has stated that Italy will continue to support Ukraine, her coalition would undoubtedly raise questions about the country’s policy, given the ties of League leader Matteo Salvini and Silvio Berlusconi, the former prime minister who now heads Forza Italia, to Russian President Vladimir Putin.

A new headache for the EU?

With the Ukraine war and growing energy crisis absorbing the focus in Brussels, the EU may not be enthusiastic to work with the likes of Meloni, who could lead Italy down the path already traveled by Hungary or Poland, as Letta warns.

Meloni sees Italian individualism as the solution to becoming a more influential European actor. “We want a different Italian attitude on the international stage, for example in dealing with the European Commission, [but] this does not mean that we want to destroy Europe, that we want to leave Europe, that we want to do crazy things,” she said last month. “It simply means explaining that the defense of the national interest is important to us as it is for the French and for the Germans.”

A Meloni-led government could well be at odds with the Commission from an early stage. The leader of the Brothers of Italy has questioned EU fiscal requirements, claiming that the EU Stability and Growth Pact—which aims to keep national budget deficits below 3 percent of gross domestic product—should not apply in the current economic climate, and that Italy should not be subject to those conditions to receive pandemic recovery funding. She has also decried the EU’s response to the energy crisis, citing the impact of continued rising prices on firms and households.

Meloni’s premiership could also see Italy tilt toward protectionism. For example, her party wants the state to purchase a controlling share in Telecom Italia, which Meloni says would result in a “state owned, non-vertically integrated network and private operators operating under free competition,” effectively cutting out other European investors.

Will Meloni tone down her calls for Italy’s sovereignty once she enters Palazzo Chigi?  Many populist leaders have done just that in recent years after winning elections. Chances are that a more conventional political line toward Europe will be embraced once in power—but that remains to be seen.

The lay of the land

For the first time, Italians are voting to fill a shrunken Parliament. A 2020 constitutional referendum reduced the number of seats in the lower house from 630 to 400, and shrank the senate from 315 members to 200. A smaller legislature will reduce the size of future majorities, which means more emphasis on party loyalty and potentially more stability to implement legislative agendas.

Here’s a look at the main contenders and what they promise:

What’s next for Italy?

The conditions for this election show that Italy cannot continue to be governed by technocrats. But will Italians be better off under the leadership of a so-called sovereign coalition—or is this the final episode of populist politicians exploiting the hearts of disappointed citizens? There seems to be little concern about whether Italy will remain a solid transatlantic partner, but the big question mark looms over relations with Europe. Will Italy fight at any cost for a Europe whole and free, or will it simply squabble with other European countries?

As the Italians say, non si sa—no one knows.

Ilva Tare is a nonresident senior fellow at the Atlantic Council’s Europe Center and host of the Europe Center’s #BalkanDebrief series.

Akshat Dhankher is a program assistant at the Europe Center. 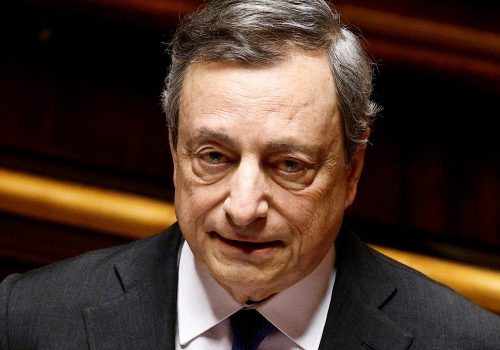 Mario Draghi, and Italy’s political stability, are gone. What’s next for Europe? 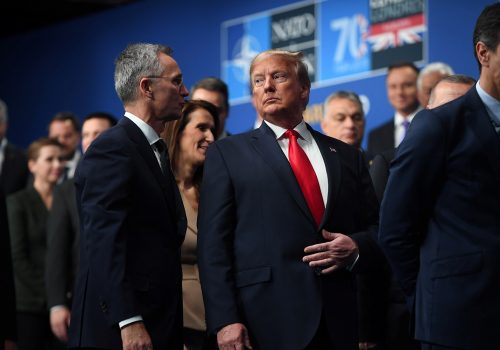 Europe home alone: Gaming out the future of transatlantic relations

The Atlantic Council partnered with Körber-Stiftung International Affairs on the 2022 Körber Policy Game to game out Europe's reactions to any future rifts in the transatlantic relationship. 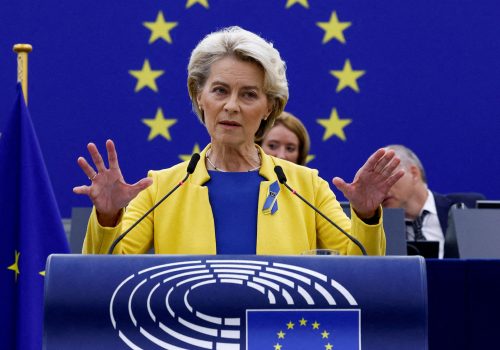 What’s next for European energy security? Our experts decipher the State of the European Union Address.