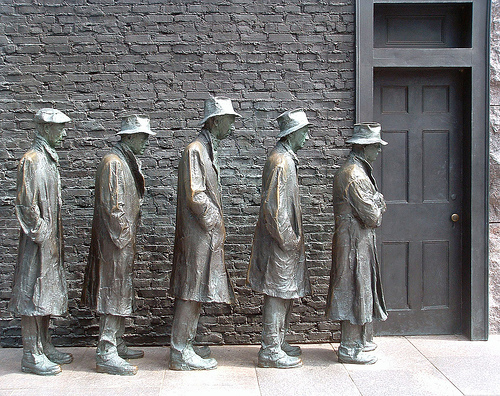 FP’s Annie Lowrey notes that, “As many as 50 million people could be out of work by the end of 2009. But the unemployed in some countries definitely have it better than others.”

Perhaps not surprisingly, Scandanavia, the Benelux, and Switzerland top the list.

Benefits: 80 to 90 percent of prior income

For how long? 10 months to four years

Life on the dole: Denmark, Finland, Norway, and Sweden. They’re cold. They’re dark. And they’re the best places on Earth to be sacked. On virtually every metric, these countries outspend and outdo all others in supporting the involuntarily unemployed. Denmark — home to the most generous entitlement in the world — offers up to 90 percent of prior earnings for up to 48 months. Average-income workers in Finland take home about 85 percent for up to 500 days, a little over 17 months. Comparatively stingy Sweden provides about 80 percent of earnings for about 10 months.

All of the Scandinavian countries require registration with public offices that connect job seekers with employers and retrain workers into high-demand industries. Denmark, for instance, staffs 190 such offices. They offer computer training and résumé review, and even help place unemployed workers into temporary positions, filling in for employees who leave for educational sabbaticals and parents on maternity or paternity leave.

The Benelux countries of Belgium, the Netherlands, and Luxembourg come in second, granting 60 to 85 percent of prior income for a minimum of one year and possibly indefintely.   They’re followed by Switzerland, which provides 70 to 80 percent of income for 400 to 520 days; France, which provides 57 to 75 percent for up to three years; and Japan, with 50 to 80 percent paid for six months to a year.

The United States is not on her list.  We handle it on a state-by-state basis but benefits are not very generous anywhere as we see paying people not to work as a disencentive.  Only those who were full time workers are typically eligible and benefits are typically paid for a matter of weeks.