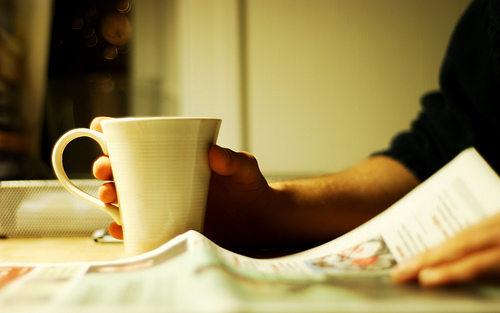 One truism that I’ve noted over the years is that any event that I experience in person will invariably be reported in the press quite differently. That proved true again last night as I began absorbing media accounts of CIA Director Michael Hayden’s “State of al Qaeda Today” address to the Atlantic Council.

It seemed obvious to me that the “news” was Hayden’s declaration that “Today, virtually every major terrorist threat that my agency is aware of has threads back to the tribal areas” along the Pakistan-Afghanistan border. While not exactly shocking to those who have followed the news on the subject, it’s a much more sweeping statement than I’ve seen by someone in a position of authority. Yet, while that quote got some play in virtually every story, it was the lede in hardly any of the stories in the major press and didn’t even make some of the pieces. Instead, most focused on Hayden’s broader assessment of al Qaeda’s reach or the narrower story of capturing Osama bin Laden, both of which I considered to be recapitulation of, to use Don Rumsfeld’s phrase, known knowns to set up the main story. And, unlike what sometimes happens with domestic news, where correspondents simply go where they’re told and often lack the expertise to know what’s truly new and important, these are world class beat reporters we’re talking about.

Even as Al Qaeda strengthens its hub in the Pakistani mountains, its leaders are building closer ties to regional militant groups in order to launch attacks in Africa and Europe and on the Arabian Peninsula, the director of the Central Intelligence Agency said Thursday. The director, Michael V. Hayden, identified North Africa and Somalia as places where Qaeda leaders were using partnerships to establish new bases. Elsewhere, Mr. Hayden said, Al Qaeda was “strengthening” in Yemen, and he added that veterans of the fighting in Iraq and Afghanistan had moved there, possibly to stage attacks against the government of Saudi Arabia.

CIA Director Michael V. Hayden said yesterday that al-Qaeda remains the single greatest threat to the United States but that Iraq is no longer the central front in the broader war on terrorism.

Osama bin Laden is isolated from the day-to-day operations of al-Qaida but the terrorist organization he built is spreading its influence in Africa and the Middle East, CIA director Michael Hayden said Thursday. Al-Qaida remains the single greatest threat to the United States, Hayden said in remarks prepared for delivery at the Atlantic Council.

Al-Qaeda leader Osama bin Laden is alive and “largely isolated,” said CIA Director Michael Hayden, who added that U.S. intelligence had disrupted a terrorist attack that “would have rivaled the destruction of 9/11.”

Osama bin Laden, deeply isolated and likely near the rugged Afghanistan-Pakistan border, has been forced to devote much of his energy to his own security while his Al-Qaeda terror network remains resilient, CIA Director Michael Hayden said Thursday.

U.S. intelligence agencies believe Osama bin Laden is isolated from al Qaeda and spending much of his energy merely surviving, the head of the CIA said on Thursday.

Seven years after the Sept. 11 attacks, the CIA has updated its official assessment of the al-Qaida terrorist network. Michael Hayden, the agency’s director, says al-Qaida remains “the most clear and present danger to the United States today.”

CIA Director Michael Hayden said today that a once-feared Indonesian al Qaeda affiliate, Jemaah Islamayih, has increasingly been disrupted in its terrorist actions. “The group’s capabilities and confidence are simply not what they were three years ago,” he told the Atlantic Council.

Osama bin Laden is alive and “putting a lot of energy into his own security,” the director of the CIA, General Michael Hayden, said today.

General Michael Hayden, the director of the U.S. Central Intelligence Agency, has said that Al-Qaeda and its leader, Osama bin Laden, remain isolated in the remote mountains of Pakistan near the Afghan border.

Or Randall Mikkelsen of Reuters (“Qaeda stung by U.S. pressure in Pakistan-CIA chief“):

U.S. pressure on al Qaeda near Pakistan’s border with Afghanistan has put the group “off balance,” but the region remains the biggest terrorism threat to the United States, the CIA’s chief said on Thursday.

Indeed, the only correspondent who saw it the same as I did was Nico Hines of the Times of London (“CIA says bin Laden cut off from al-Qaeda“):

The head of the CIA has claimed that almost all terrorist threats facing the US now originate in lawless Pakistani tribal areas, adding that Osama bin Laden is becoming increasingly isolated from the day-to-day running of al-Qaeda.

Ewen MacAskill of The Guardian highlights what I thought was the off-lead, and perhaps the most interesting bit of “new news” from Hayden’s briefing in “CIA warns of increase in ‘western’ terrorists.”

Growing numbers of westerners are travelling to the tribal areas of north-west Pakistan to receive terrorist training, the head of the CIA warned yesterday.

For what it’s worth, my third choice for headline would have been Hayden’s steadfast and repeated declaration — which runs counter to the conventional academic wisdom and certainly one not aimed at lobbying President-Elect Obama to keep him in place — that the use of the word “war” to describe our struggle against al Qaeda is absolutely and unequivocally accurate.

Almost as interesting — to me, at least– as the fact that the correspondents above mostly emphasized different themes than I did is the sheer diversity of what they thought the lede was. One wonders whether this was a function of their genuinely coming out with a different takeaway than I did or simply a matter of their tailoring their stories to what their readers would find more interesting.

One clear example of the latter phenomenon comes from the Associated Press of Pakistan, which weighed in with “Hayden praises Pakistan’s actions, says US, allies keeping al-Qaeda off-balance.”

Pakistan deserves great credit for its sustained anti-terrorism campaign in its border areas with Afghanistan, CIA Chief Michael Hayden said, declaring that the United States and its allies are keeping al-Qaeda off-balance by deepening isolation of its members.

While I included that as an aside in my own piece on Hayden’s talk, it would have been far down my list of ledes. For the Pakistani audience, though, it was absolutely the right choice.

Hayden closed his appearance yesterday evening with the simple dictum that “intelligence is hard,” explaining why no matter how well they do their job, failures are inevitable.  Covering intelligence is hard, too.  Readers have different levels of background knowledge and interest and intelligence officials, by the nature of their business, can only share with reporters a part of what they know.  So, the correspondent has to both read between the lines, decipher ingcrypic clues, and yet not miss telling the reader the important-but-known-to-insiders in favor of what’s new to the reporters but meaningless to the average reader without context.