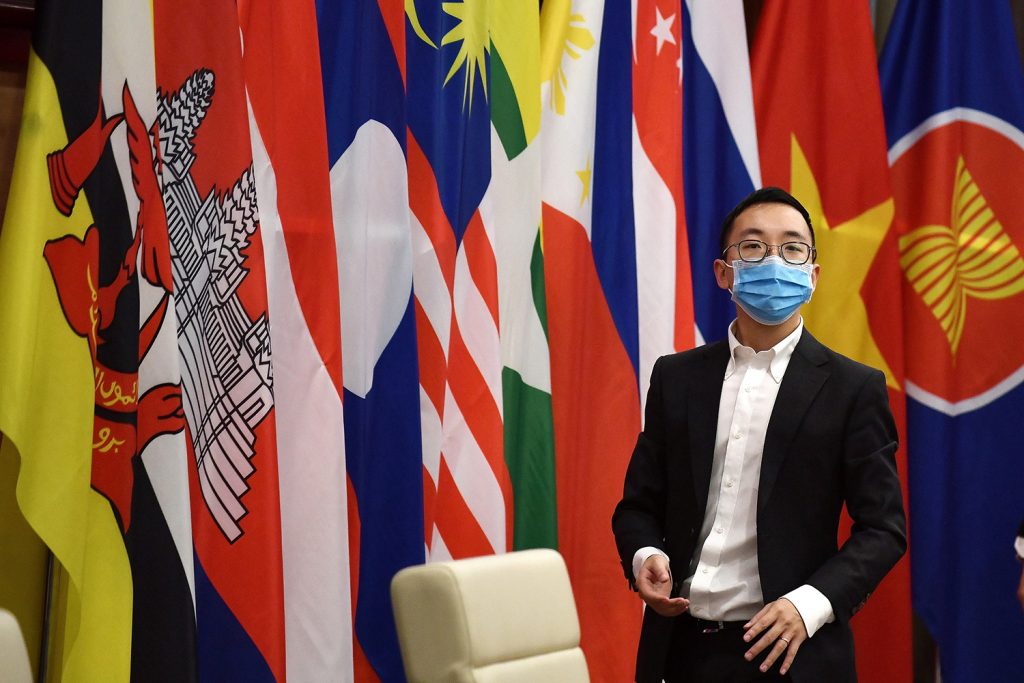 A great deal of ink is being spilled trying to divine whether China or the United States will emerge with more influence and prestige in a post-COVID world, not least in Southeast Asia, a key battleground in the increasingly hard-edged strategic competition between the world’s two largest economies.

Nothing that’s happened yet—including China’s much commented-on ‘mask diplomacy’—is going to sway opinions or foreign policy alignments in Southeast Asia in fundamental ways. But that could change depending on what steps China and the United States take as their relationship moves—as it now seems likely to do—in a sharper, more antagonistic direction in the months and years to come.

The United States and China have both made significant efforts to assist the ten members of the Association of Southeast Asian Nations (ASEAN) as they deal with the pandemic. The United States has offered a variety of medical expertise and funding, most recently in a dialogue with ASEAN health ministers. China has flown in medical equipment and personnel to almost all of the ASEAN countries.

China is coming out ahead in the public relations narrative, in part because of its generous donations of essential and urgently needed medical equipment like masks, protective gear, and testing equipment that the United States does not have to donate. And in part because of Beijing’s determined—sometimes bordering on heavy-handed—efforts to publicize its assistance. Well-known Chinese companies like Alibaba, Tiktok, and Ping An have also launched sizeable assistance efforts across Southeast Asia.

But these efforts, although appreciated, aren’t on their own going to change the geopolitical equations of any Southeast Asian country. For ASEAN, what was true before the pandemic will be true after: both the United States and China are vitally important partners and accordingly ASEAN countries will try their utmost to try to balance the two powers, tread carefully, and avoid being too closely drawn into one camp or the other. The existential question for ASEAN is whether this strategy will still be viable in a post-COVID world.

In recent years, China has overtaken the United States to become the leading trade partner and provider of new foreign investment in almost every Southeast Asian country. Many ASEAN nations export raw or intermediate goods to China, which then exports finished goods to Europe or the United States. Access to the US market is also important to ASEAN countries but equally important is the US provision of security guarantees and its role as a hedge or balance to China.

Although China is seen by ASEAN elites as the most influential country in Southeast Asia in economic, political, and strategic terms, it faces a yawning trust deficit. A majority of ASEAN elites expressed either little or no confidence that China “will do the right thing” in contributing to global peace, security, prosperity, and governance. And a near majority of ASEAN elites believe China “will become a revisionist power with the intent to turn Southeast Asia into its sphere of influence.”

China’s missteps at the beginning of the pandemic, its lack of transparency, and its acute sensitivity to criticism will not have improved trust levels in Southeast Asia, although there is grudging respect for the effectiveness of Beijing’s efforts to control the spread of the pandemic in China once its existence was acknowledged. As for the United States, its shambolic, inconsistent handling of the crisis at home and its all but complete abdication of its traditional global leadership role have not been comforting sights for Southeast Asia and will further erode what’s left of the US soft power advantage.

But neither the US nor Chinese actions since the outset of the pandemic until now will make much difference in terms of how individual Southeast Asia countries understand their geopolitical realities. We are still at the very early stages of coming to grips with what the post-COVID world will look like. The initial reactions by the two world powers to the pandemic, while perhaps not edifying, are also not determinative.

Stuck in the geopolitical middle

What matters is what happens next. With US-China relations as frayed as at any time in the post-Cold War period, actions taken by either country could begin to move the needle in terms of how Southeast Asia positions itself.

Any attempts by China to take advantage of the pandemic, including what it sees as a decline in US naval operational readiness, will set off alarm bells across Southeast Asia. The most obvious area of concern is the South China Sea, where China has recently stepped up its efforts to assert sovereignty within the so-called nine-dash line. Its recent sinking of a Vietnamese fishing boat, its ongoing harassment of Malaysia’s national oil company as it explores for hydrocarbons in waters it considers its own, and the creation of new administrative regions for the islands China has built in the South China Sea are all ratcheting up concern levels in maritime Southeast Asian capitals.

In mainland Southeast Asia, there is rising apprehension about China’s activities on the Mekong River. China has already built eleven dams along the river and has plans to build eight more, creating unease about irrigation levels and rice production in the fertile farming areas downstream from the dams.

Further afield, increased Chinese naval activity near Taiwan and the recent rounding up of Hong Kong democracy activists are raising fears across Southeast Asia that China is using the pandemic to flex its muscles while the rest of the world is preoccupied at home. As these perceptions take hold, Southeast Asian countries will look for ways to raise the costs to Chinese expansion, including trying harder to boost US engagement, both economic and military, in the region.

The risks to the United States’ standing in Southeast Asia are also plentiful, however. Diplomats in Southeast Asia are already girding themselves for ramped-up pressure from Washington to publicly sign on to efforts to blame China for the COVID-19 pandemic. This will almost certainly meet the same fate as earlier—and unsuccessful—Washington efforts to discourage ASEAN members from joining the China-led Asian Infrastructure Investment Bank (AIIB), or from accepting Chinese infrastructure loans through its Belt and Road Initiative (BRI), or from buying 5G equipment from Huawei, but the effort nevertheless will ruffle feathers.

The suspension of US funding to the World Health Organization (WHO) will undermine Southeast Asian views of the United States as a reliable international partner. Some of the US COVID-19-related assistance to Southeast Asia announced over the past six weeks—including to Indonesia and Myanmar—was in fact meant to be funneled through the WHO. It’s unclear what happens to that aid in light of the US suspension of its WHO funding.

Remain in the economic game

Apart from these two irritants, there are two significant threats to the United States’ still strong influence in Southeast Asia worth noting. One is Washington’s ability to effectively manage the COVID-19 pandemic at home, and get back on track to economic recovery. If through poor leadership at the national level, continuing supply chain constraints, and premature openings at the state level, the US return to economic vibrancy suffers multiple setbacks and takes longer than other large economies, including China’s, inexorably Southeast Asia will find itself more absorbed into China’s economic orbit.

As recovery from the pandemic progresses, therefore, it will be important for Washington to continue and increase its economic engagement with Southeast Asia. Legislation and initiatives such as the BUILD Act, Asia Edge, the Blue Dot Network, and the US-Japan-Australia infrastructure partnership are all helpful elements of that engagement, but they are no substitute for a vibrant US market that can and does stay open to global commerce. In this regard, the recent US decision to restrict Thailand’s access to the US Generalized System of Preferences program, and its consideration of doing the same to Indonesia, act as little more than geopolitical own goals.

Heightened engagement with Southeast Asia for both economic and geostrategic reasons does not mean the United States can’t or shouldn’t respond to Chinese mercantilism and trade violations. Pushing back on China’s intellectual property infringements, forced transfers of technology, disguised state subsidies and the like are not only warranted but welcomed by virtually all other countries, including those in Southeast Asia.

So too would Southeast Asian countries applaud US efforts to invest more in its own infrastructure and technical prowess, reduce its supply chain dependency on China and otherwise take steps to enhance US economic vitality. Accounting for 15 percent of global gross domestic product, a healthy US economy is not just good for Americans but good for the world.

The challenge will be in making sure that efforts to regain US economic robustness do not harm allies or push otherwise neutral parties closer to China. Of particular concern, and this is the second significant threat to US influence in Southeast Asia in the short to medium term, is how the United States responds to the considerable supply chain vulnerabilities it has discovered since the onset of the pandemic.

Global supply chains were already being re-ordered prior to the pandemic, driven both by technology advances and the US trade war on China. But as the world emerges from the COVID-19 crisis, global firms will come under stronger pressure to restructure their supply chains to achieve a better—or at least different—balance between efficiency and resilience. Whether that process is driven primarily by economic considerations or political mandates could well have significant geostrategic consequences.

Southeast Asia has been one of the main beneficiaries globally of the US-led support for free trade over the past three decades; its integration into global supply chains has led to rising prosperity for hundreds of millions of Southeast Asians. Any effort by the United States to precipitously decouple from China, for example, or to enact sweeping Buy American policies will deal a body blow to Southeast Asia exporters and to the region’s economies more generally, given their trade dependency on China. An inevitable outcome of such policies will be to enhance China’s influence across Southeast Asia.

Adam Schwarz is CEO and founder of Asia Group Advisors, a strategic and investment advisory firm headquartered in Singapore. He is a nonresident senior fellow at the Asia Security Initiative in the Atlantic Council’s Scowcroft Center for Strategy and Security and an adjunct senior fellow at the Rajaratnam School of International Studies in Singapore. He is the author of A Nation in Waiting: Indonesia’s Search for Stability.

Image: An official wearing a face mask looks on as Vietnam's Prime Minister Nguyen Xuan Phuc attends a special video conference with leaders of the Association of Southeast Asian Nations (ASEAN) on the coronavirus disease (COVID-19), in Hanoi April 14, 2020. Manan Vatsyayana/Pool via REUTERS