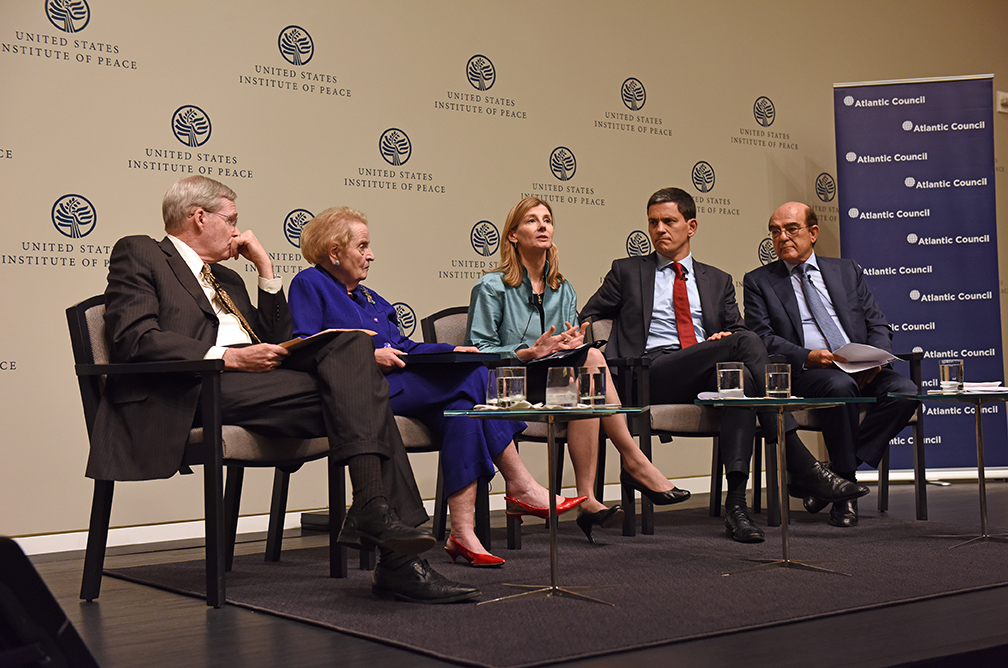 Former British Foreign Secretary says United States, too, must ‘up its game’ and take in more refugees

Europe’s “feeble” response to the migrant crisis—the largest displacement of people since World War II—is threatening the European Union, and European countries as well as the United States need to step up to do more to help these refugees, David Miliband, a former British Foreign Secretary, said in Washington September 18.

“The current uncoordinated, haphazard, feeble European response to this crisis is not just threatening the refugees, it is threatening an extraordinary institution, which is the European Union,” Miliband, a son of refugees and President and CEO of the International Rescue Committee, said at the United States Institute of Peace (USIP).

“What you’re seeing now is a daily arms race between different countries in the east of Europe to move from fences to water cannon to tear gas to keep refugees out,” he said, adding that “the politics is going in the wrong direction… and the threat to the most basic norms and values of the European Union is very, very substantial at this stage.”

He called for an effective system for distributing refugees among the twenty-eight member states of the EU. Until then, Miliband said, “We’re going to face a beggar my neighbor approach that is very, very dangerous and it is frankly a race to the bottom at the moment.”

Miliband spoke on a panel hosted jointly by the Atlantic Council and the USIP on how to deal with the refugee crisis that has been exacerbated by the over four-year-old war in Syria.

MEST, an initiative of the Atlantic Council’s Rafik Hariri Center for the Middle East, has set up a working group to examine the refugee crisis. The group’s findings take into account the ongoing cycles of violence as a result of which people are being displaced for longer periods of time; the effect this displacement is having on regional demographics; and the fact that the refugees are dispersed across urban communities making it a challenge to reach out to these populations, said Manal Omar, Acting Vice President of the Middle East and Africa Center at USIP, who leads the working group.

The Syrian war, now in its fifth year, has claimed the lives of almost a quarter million people, displaced more than seven million within Syria, and has created four million refugees, most of whom have dispersed across Syria’s neighborhood, and some of whom are now streaming into Europe.

The European response to the migrants has ranged from warm welcomes to outright xenophobia. On the latter end of that spectrum is Hungarian Prime Minister Viktor Orbán who is building a fence to keep the refugees out and has warned about the threat the mainly Muslim migrants pose to Europe’s Christian roots. On the former end is German Chancellor Angela Merkel. Germany expects to have 800,000 asylum applications this year, and German Vice Chancellor Sigmar Gabriel said his country could take in 500,000 refugees annually for “several years.”

However, faced with the reality of thousands of refugees turning up at its door, Germany now appears to be rolling up the welcome mat, as do Austria, Croatia, Slovakia, and the Netherlands.

Albright faulted European nations for failing to adopt a “coherent common approach” to the migrant crisis and said the international community has failed to provide enough support to Middle Eastern countries that have taken in Syrian refugees.

The United States has accepted 1,500 refugees (a number Miliband called “pitiful”) since the start of the war in Syria in 2011.

Under pressure to do more, the White House announced earlier in September that the United States would take in least 10,000 Syrian refugees over the next year.

Refugee advocate groups and some members of Congress say this is still not enough. The International Rescue Committee and at least fourteen US Senators have called on the Obama administration to take in 65,000 Syrian refugees.

The United Nations has urged Europe to take in 200,000 people fleeing conflict zones. The United States needs to “up its game in a massive way” and take in half that number based on its historic record of taking in half of the number of the world’s refugees, said Miliband.

Albright, who wore a Statue of Liberty brooch as a reminder of the time she and her family sailed to the United States as refugees from Czechoslovakia, also urged a more generous response from the United States.

“When it comes to global crises today, I fear that too many in the United States believe that we can insulate ourselves from the world’s problems and leave it to the countries of the region and Europe to sort out,” she said.

“The idea that we can stand aside or wait for others to act is an illusion marked by the lessons of history,” she added.

“For all the fuss that you hear… [in the United Kingdom] about three to 5,000 people who are in Calais trying to get into the UK, 85 percent of the world’s 20 million refugees, 40 million internally displaced people are in poor countries not in rich countries,” said Miliband.

In the case of Syria’s neighbors, there is a “fiction, which I am afraid unites donors and hosts” that the crisis is a “temporary problem that needs a temporary response,” he said, adding, “The truth is that this is not a temporary problem, it is a long-term problem.”

Miliband urged a more radical response to dealing with refugees.

Frem, Jounieh’s Mayor, painted a grim picture of the toll the massive influx of Syrian refugees is taking on Lebanon’s infrastructure and social fabric.

The Syrian refugees in Lebanon are urban refugees, which means they don’t live in camps but in cities and towns. There they compete with the local population for jobs; have driven up housing costs; live in unfinished accommodations, playgrounds, and parks creating unsanitary conditions; and strain the health and educational services, said Frem.

The fact that a majority of Syrian refugee children haven’t attended school since their lives were disrupted by the war is a great concern.

“We are going to be ending up with a lost generation of Syrians who are completely illiterate… This means that this is a fertile ground for terrorism and radicalization,” Frem warned.

Lindborg said that on a recent visit to refugees in northern Iraq an activist told her: “We have seven camps, we have seven time bombs waiting to go.”

“We have got to be thinking about the future of these children,” said Lindborg.

The panelists suggested a number of ways to address the crisis, including providing cash to refugees so that they can buy supplies they actually need and in the process plough money back into the host countries’ economies; the creation of a safe zone inside Syria solely for refugees that would ease the burden on Syria’s neighbors; enforcement of a United Nations resolution on the delivery of humanitarian assistance in Syria; and finding a way to prevent Syrian President Bashar al-Assad from using deadly barrel bombs on civilians.

But all panelists agreed that ending the war in Syria is key to finding a solution to the migrant crisis.

“At the heart of the matter lies the international community’s failure to find a way to end the catastrophic violence in the region,” said Albright.

“The policy failures that have brought us to this point are clear. The solutions, however, seem maddeningly out of reach,” she said, adding that the situation now is so untenable that a consensus is emerging on the need for a new approach.

“Humanitarian organizations can staunch the dying, but it takes politics to stop the killing,” said Miliband.

“The absence of political engagement, essentially the turning away from the world’s running sore, is not just making it worse, but is actually untenable,” he added.