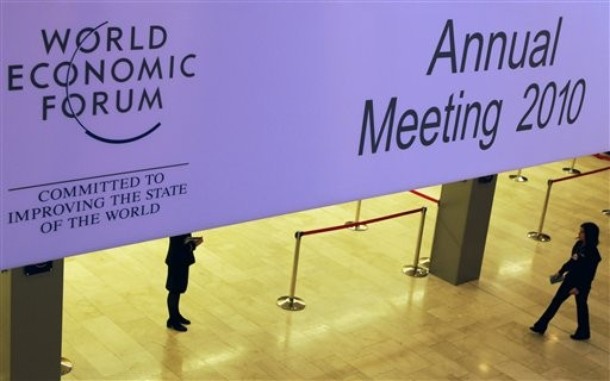 French president Nicolas Sarkozy opened up the World Economic Forum with a call for tighter regulation of business, including executive pay limits and new accounting rules.   He warned of catastrophe if "we do not change the regulation of our banking system and the rules for accounting and prudential oversight."

Beating a straw man, he continued, "From the moment we accepted the idea that the market was always right and that no other opposing factors need to be taken into account, globalization skidded out of control."

Another headliner at Davos, investor George Soros, heartily agreed.  Indeed, he believed that President Obama’s plan to separate the banking and investment arms of America’s big financial conglomerates, announced before the summit, didn’t go far enough, fearing, "Some banks will spin off their investment banks and they will be very substantial and they will be too big to fail."

European Central Bank president Jean-Claude Trichet waxed enthusiastic, too. "They go in the same direction of our own position, namely ensuring that the banking sector focuses on financing the real economy, which is its key role."

Not shockingly, many of the assembled business leaders saw it differently. Deutsche Bank Chairman Josef Ackermann said "we will all be losers" if governments clamp down on markets too zealously.  Barclays head Robert Diamond observed, "I have seen no evidence … to suggest that shrinking banks and making banks smaller and narrower is the answer," adding, the "impact of that on jobs, on the economy, in particular global trade and on the economy, that would be very negative."

Standard Chartered CEO Peter Sands summarized the regulatory challenge: "If we get it wrong in one dimension, we will end up stifling growth. If we get it wrong in the other dimension we end up with another crisis.  Ackermann agreed, adding, "We could all be losers in the end if we don’t have an efficient market in place any more."

Heizo Takenaka of Keio University in Japan, a former Japanese minister for regulation, told FT that it would be foolish to expect smart regulation to emanate from the world’s parliaments, especially in the current populist climate. “It is impossible for politicians to understand finance,” he said.

Actually, Takenaka is being too optimistic!   If only the problem were to limited to writing good regulations in, say, Tokyo or London or Washington.  Instead, as proponents readily admit, the issue is coming up with regulations that can be applied internationally!

Trichet tells WSJ, "We are all engaged in working out the appropriate global rules. We have an agreement of all industrial and all systemic emerging countries. We are all committed to work out together these new prudentials and if one systemic country – I’m not speaking particularly of the US but of all of them – is not applying the new prudential rules, then the whole exercise of the G20 would appear futile."

BBC business editor Tim Weber reports that Soros fully understands this, "all major economies would have to agree on a common set of financial regulation," otherwise, "capital would simply move to the least regulated country." Otherwise, as one wag at Soros’ talk noted, if the US and UK enact tighter regulations, there would be nothing to stop "Goldman Sachs from setting up shop in Somalia."