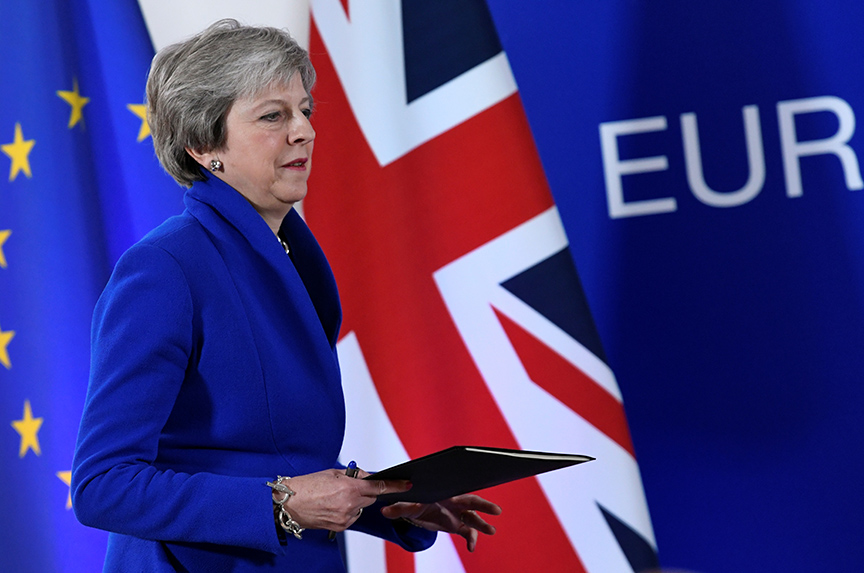 British Prime Minister Theresa May delivered a speech about her vision for Brexit at Mansion House in London on March 2. (Reuters/Leon Neal/Pool)

The United Kingdom now has a withdrawal deal with the European Union. In painstaking detail, set out in a 585-page document, it settles various aspects of the exit process, and is accompanied by a much briefer (and non-binding) political statement of principles for a future relationship between the UK and the EU.

But now the real problems start. The agreement has been criticized on all sides, with even its chief protagonist, British Prime Minister Theresa May, conceding that it is far from perfect. In the much over-used metaphor, it kicks the can down the road on a number of crucial issues, not least how to avoid a hard border in Ireland, and will struggle to obtain support from the House of Commons.

May’s more trenchant critics, especially inside her own party, use terms like “colonization” or “vassal state” to describe an outcome leaving the UK still subject to EU rules and norms, yet with no voice in how they are set. They see the outcome as a betrayal of what was promised in the “take back control” rhetoric of the 2016 referendum.

Meanwhile, Remain supporters condemn the deal as a second-best, imposing many of the obligations of EU membership, while (echoing the pro-Brexit side) leaving the UK as a rule-taker. The two Johnson brothers who quit the government in protest against the deal sought by May epitomize the divisions, with one (Boris) arguing that Brexit will not be sufficiently hard, while the other (Jo) argues that the deal is inferior to staying in the EU.

What happens next? The immediate challenge for May is to have the withdrawal deal endorsed in a parliamentary vote, expected to be held in mid-December. As things stand, the arithmetic does not look auspicious for her. Support from the Democratic Ulster Unionists, crucial since the botched 2017 general election in enabling her to govern, is unlikely and a sizable number of her own MPs are expected to vote against her. For the deal to be approved, therefore, the prime minister will have to rely on opposition votes.

The Labour Party, however, sniffs an opportunity to bring down the government, opening the way to a general election that could bring it to power. Some Labour MPs fret about, on the one hand, betraying their constituents who voted by large majorities in the referendum for Brexit and, on the other, about the hard-left program of the current party leadership. A solid Labour vote against the deal would scupper it.

Some commentators, though, have started to refer to a TARP scenario, recalling what happened in the United States in 2008 with the administration’s bill to bail out the financial sector. After initially rejecting the bill, triggering strong negative reactions from financial markets, the House of Representatives voted again a few days later to pass the bill, allowing then US President George W. Bush rapidly to sign it into law.

Market turbulence would be sure to follow from a rejection of the withdrawal deal by Parliament, but it is less obvious that the House of Commons would step back from the abyss by reversing an initial rejection. On the contrary, the clamour for an alternative way out of the impasse would intensify, with “remainers” demanding a re-run of the referendum, and hard Brexiteers advocating immediate exit.

The content of the long-term partnership will be even harder to agree. Five main elements of the economic links will be most contentious: the trade regime, the form of regulatory equivalence, any demands on the UK to pay toward EU policies, restrictions on free movement of citizens, and the jurisdiction of the European Court of Justice.

Both before and after the 2016 referendum, there was extensive discussion of whether any of the existing models for relationships between the EU and various privileged partners could be adapted for the UK. These encompassed the very close links between Norway and the EU, the somewhat less comprehensive arrangements for Switzerland, the recently concluded free trade deal between the EU and Canada, and even references to the Albanian and Turkish models.

Outside the EU, there are now three main options for the UK, given that the “political statement” appears to rule out continuing UK participation in the single market (the Norway model), because it acknowledges that the free movement of EU nationals will be restricted, while the Swiss model with its profusion of bilateral deals is disliked by Brussels.

These options are: to stay in the customs union (perhaps emulating the EU-Turkey relationship); a Canada-style deal, perhaps with some additional provisions for services; or to have a status similar to other “third countries” like the United States or China. There is extensive scope for a bespoke arrangement under each of these options, but they have clear dividing lines.

Many in the UK, especially in the business community, are keen to stay in the EU customs union fearing disruption of trading relationships and supply networks. It would also avoid any need for a hard border in Ireland, the issue which—to the surprise of many—became the hardest to resolve in the withdrawal deal. However, a UK inside the customs union would be largely unable to strike bilateral trade deals with other countries, something at the heart of the case for Brexit. It would probably also mean continuing UK payments to Brussels and being subject to the jurisdiction of the European Court of Justice.

A free trade arrangement would allow for separate trade deals, but would risk problems at the Irish border. Neither staying in the customs union nor a free trade deal would offer unfettered access for the UK’s financial and business services to the EU market, although a commitment to ensure equivalence of regulation may mitigate the negative effects.

A future as a third country, trading on World Trade Organization terms—in effect “no deal”—appeals to the more extreme Brexit supporters, many of whom also see it as facilitating a different regulatory framework for the UK economy. But this hardest form of Brexit has been generally adjudged to be damaging for the UK economy. Indeed, May has done a 180-degree turn from the optimism of a year ago when she said no deal is better than a bad deal.

In the light of the above, you may wonder why reversing the Brexit decision seems not to be an option. As May has repeated so often: “Brexit means Brexit.”

Iain Begg is a professorial research fellow and co-director of the Dahrendorf Forum at the European Institute of the London School of Economics and Political Science. Follow him on Twitter @IainBeggLSE.