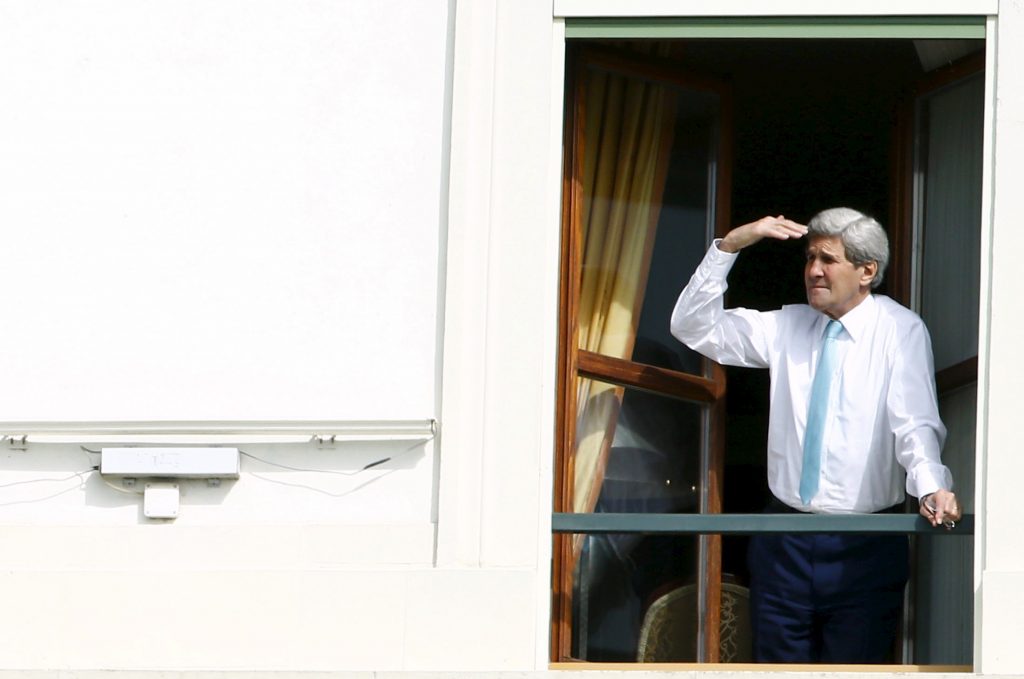 The failure of the P5+1 and Iran to strike a “framework” accord by their own March 31 deadline is troubling. If the two sides can’t even agree to agree on some vague bullet points after sixteen months of negotiations, it is hard to imagine that they will be able to work out a comprehensive accord, complete with all of the technical details, by the next deadline in just three months. This means that, while most analysts are focusing on the historic implications of a possible deal between Iran and the United States, the more relevant question to ask is: What happens if and when diplomacy fails?

The answer to that question is simple: The United States must return to the pressure track.

There is worldwide understanding that the status quo is unacceptable. At present, Iran could dash to a nuclear weapons capability in just two to three months. That is too close for comfort and the purpose of Iran policy, therefore, must be to roll back Iran’s nuclear capabilities and the associated breakout time to at least one year, if not more.

Unfortunately, it looks increasingly unlikely that the present approach will help us achieve that objective. The problem has not been insufficient time. After all, the negotiators have already been at this for sixteen months, since the interim deal, also known as the Joint Plan of Action (JPOA), was signed in November 2013. Rather, the problem is that Iran’s Supreme Leader is simply unwilling at present to make the concessions necessary to convince the world that his nuclear program is entirely peaceful.

If diplomacy fails this time around, then a new approach will be needed. The international community could try even more accommodation, but we know that Iran only makes concessions when its back is against the wall. This means that if the P5+1 does not get a framework agreement imminently, or if it falls short of a detailed comprehensive deal by June 30, then it should increase the pressure on Iran’s leaders.

This course of action would include at least five elements.

First, we need to make it clear that it was not the international community, the United States, or Republicans in Congress who were responsible for diplomacy’s failure, but Iran. So far, the Iranians and their clever Foreign Minister, Mohammad Javad Zarif, have outmaneuvered us on this front, but we have the better story to tell. We must simply explain through a coordinated public diplomacy campaign that Iran has been turning down reasonable proposals for over twelve years and the current difficulties are simply the latest in a long line of Iranian intransigence.

Second, we need to shore up the international coalition to ensure that there remains broad support for keeping the pressure on Iran. International consensus will be necessary for the integrity of the sanctions regime and for possible tougher actions down the road.

Third, we need to increase the pressure on Iran through additional sanctions. The only reason we were able to reach the JPOA is because Tehran wanted to get out from under the most intense international sanctions regime ever created, but Iran’s current stubbornness at the negotiating table suggests that we let them off the hook too soon. President Obama said in his 2014 State of the Union address: “If Iran’s leaders do not seize this opportunity, then (he) will be the first to call for more sanctions.” In practice, this means that the economic relief provided under the JPOA should be rescinded, Congress should pass additional sanctions as stipulated in the Kirk-Menendez bill, and the administration should fully implement these sanctions and exercise extreme discretion in using its waiver authority.

Fourth, we must increase the credibility of the military option. Some, including those in the administration, have argued that the alternative to a deal this time around is war, but that is misleading. Washington wants to avoid a military conflict, but Tehran wants to avoid it even more. This means if we have a credible military option on the table, Iran is unlikely to dash to a nuclear breakout capability that would necessitate the use of force. There is no reason to thump our chests about it, but we must quietly communicate to Iran’s leaders that if we judge that they are moving to build nuclear weapons, there should be no doubt that American airstrikes will follow shortly thereafter.

Fifth, and finally, with Iran boxed in through a credible military threat, we should let the sanctions pressure mount, all the while making it clear to Tehran that the door remains open if it is finally willing to put meaningful limits on its nuclear program. With this strategy in place, we still might not be able to strike a worthwhile nuclear deal, but it remains our best hope.

Thinking about a return to the pressure track is not as titillating as dreams of a near-term historic breakthrough, but it is likely the direction in which we are headed.

Matthew Kroenig is a Nonresident Senior Fellow in the Atlantic Council’s Scowcroft Center for Strategy and Security.

Image: US Secretary of State John F. Kerry looks out of his room at the Beau Rivage Palace Hotel during a break in talks on Iran's nuclear program in Lausanne, Switzerland, April 1. Six world powers and Iran met again on April 1 in a bid to reach a preliminary accord on reining in Tehran's nuclear program after failing to agree on crucial details such as the lifting of United Nations sanctions by a midnight deadline. (Reuters/Ruben Sprich)