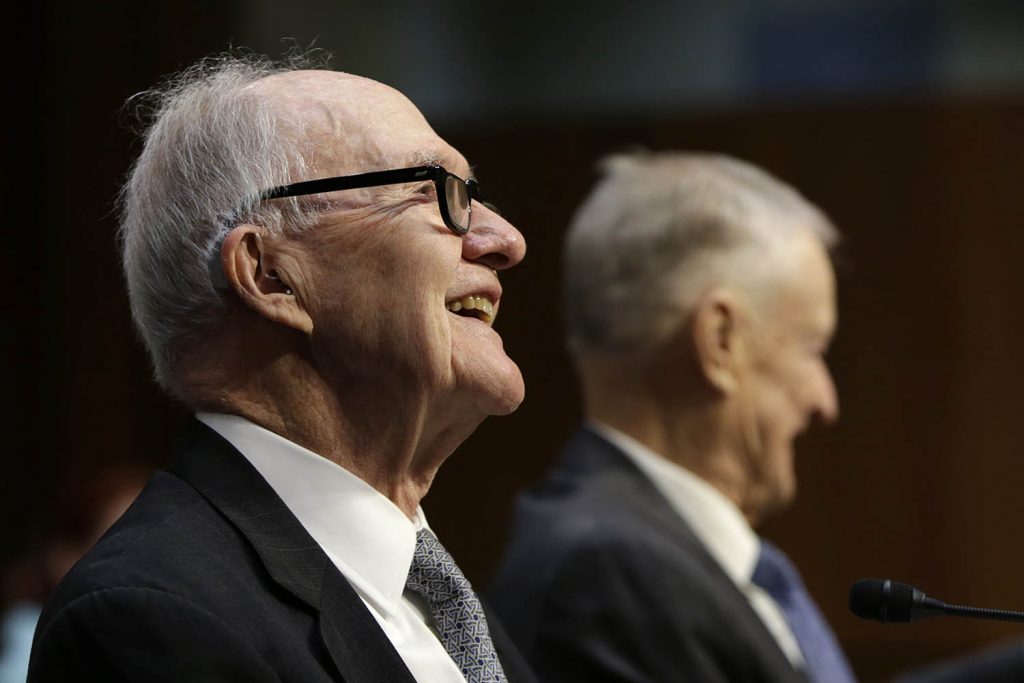 Brent Scowcroft was the quintessential honest broker, and the precedent he set as national security advisor for Gerald Ford and George H.W. Bush remains the gold standard to this day. His recent passing means the country has lost an outstanding member of the “greatest generation,” but it also provides an opportunity to take a fuller measure of his many, valuable contributions.

Throughout his career, Scowcroft was happy to let others attract publicity and remain in the background. With his expertise, dedication, analytical ability, emotional intelligence, sense of humor, and knowledge of Washington bureaucracy, Scowcroft worked effectively behind the scenes handling crises and thinking ahead. None “of the principals, or their bureaucracies, or their immediate staffs fe[lt] in the least bit threatened” by his handling of White House meetings and his close relationship with the president,” recalled one associate, David Gompert. Those who worked with him knew that Scowcroft would represent their views accurately and objectively in meetings or consultations with the president.

A prime example of Scowcroft’s understated effectiveness was his ability to persuade President Bush to challenge the Iraqi occupation of Kuwait in August 1990. At first, the president, Secretary of State James Baker, Joint Chiefs of Staff Chairman Colin Powell, and others were undecided about how to react, if react at all. After an inconclusive National Security Council (NSC) meeting, Scowcroft insisted to the president that the United States compel Iraq to withdraw from Kuwait. The Iraqi occupation, he argued, threatened Saudi Arabia and Middle East oil, contravened the United Nations Charter, and set a terrible precedent for the new, post-Cold War world. At the next NSC meeting and with the President, Defense Secretary Dick Cheney, Undersecretary of State Lawrence Eagleburger, and others now on board, the administration reached a firm decision. Later, Scowcroft led the way in persuading the Democratic-controlled Senate to grant Bush the authority to “use all necessary means” to induce Iraqi forces to leave Kuwait. But Scowcroft never claimed credit for quietly taking the helm after Iraq’s seizure of Kuwait. On the contrary, he repeatedly said it was his boss’s decision. Tellingly, President Bush himself credited Scowcroft for explaining why the war was necessary and for communicating that rationale.

Former Secretary of State George P. Shultz was the first to apply the term “gardening” to foreign relations. To garden is to listen, nurture, and cultivate ties with other countries. It is to be aware of the small problems that arise with friends, partners, and international commitments, and to wait patiently for opportune moments for improving relations. Sometimes foreign relations have to be watered and fertilized, and sometimes the weeds have to be pulled. To garden is to know that new issues will appear and that fresh problems will have to be solved, even if they require dealing with authoritarian or hostile governments.

Both Scowcroft and President Bush believed in maintaining dialogues with other heads of state and their advisers, no matter how small the countries and no matter their political and ideological differences. They kept open ties to other countries, even during periods of serious disagreement and controversy, even when there was no obvious agenda on how to proceed, and even when there was no apparent prospect of improved relations. Bush and Scowcroft’s hands-on relationship with China throughout the tumultuous years from 1989 through 1992 consisted of precisely such “gardening”; China eventually released dissident Fang Lizhi, honored its existing contracts with the United States, and toward the end of Bush’s term in office opened up its economy to the world.

Although “gardening” receives far less attention than fighting wars, assisting the victims of natural disasters, helping political refugees, and other components of international relations, it is an indispensable if unheralded part of diplomacy.

Scowcroft did not subscribe to the zero-sum world of realism: the notion that one state’s gain is another’s loss or that one state’s ability to be secure in its position means that another is necessarily politically, economically, or militarily less secure. Scowcroft saw matters differently, even if he did not wholly disagree. He called himself an “enlightened realist”—that is, someone who believed in the possibility of positive-sum (or win-win) interactions among states; there could be lasting cooperation and stable order in an ultimately anarchic international system.

Scowcroft regarded Western Europe as the United States’ natural ally in the building and maintaining of multilateral coalitions and international institutions capable of solving problems and handling crises. Europe and the United States had strong, common bonds that allowed them to act as the core of the global order, he believed. Americans and Europeans shared fundamental values about “man and his relation to society and the state,” Scowcroft thought. These shared values were “not just individual versus collective. It is the protection of minorities,” Scowcroft said. It is the rule of law, and the belief “that government should seek the maximum good for the maximum number.” He believed that the “Atlantic community” has a common eschatology: similar cultural assumptions and philosophic and religious traditions regarding ultimate ends. Nowhere else in the world, except for Canada, Australia, and New Zealand, did the United States’ foreign relations have such deep roots.

For the United States to be an effective global leader, the Atlantic community needed to be reinforced and reaffirmed. And this Scowcroft did, particular during the George H.W. Bush administration with the defusing of military tensions between NATO and Warsaw Pact forces, the reunification of Germany, and the end of the Cold War.

When Scowcroft did speak up it was usually to great effect. Dedicated to serving the Air Force and then the presidency, Scowcroft acceded to the wishes of his Air Force superiors and the president. Rarely did he lose his temper when decisions did not go his way, nor did he protest or leak information to the press. He was similarly reticent when recommendations he made were ignored, as with his reforms of the intelligence community in 2001 (the study preceded and continued after the 9/11 attacks), which the George W. Bush White House mostly did not put into practice. Scowcroft appreciated that it was the president’s prerogative to use such reports as he wished.

On some occasions, though, and particularly as his career progressed, Scowcroft did express his views. As one of three members of the Tower Board convened after the Iran-Contra affair, Scowcroft explained how the Reagan administration had seriously mishandled US national security and subverted the policymaking process. Although the Tower Commission Report found no smoking gun to directly implicate President Ronald Reagan, in the portions of the report that Scowcroft wrote he spelled out the grave responsibilities that the president’s assistant for national security affairs assumed upon his or her appointment. By so doing, Scowcroft also enhanced the powers of the National Security Council and the office of the national security advisor.

Most famously, Scowcroft spoke out against the United States going to war in Iraq in an August 2002 Wall Street Journal editorial. He argued that the invasion and occupation of Iraq was based on false premises, since Saddam Hussein was first and foremost a “power-hungry survivor” who had little cause to join with Al Qaeda and could be deterred just like other aggressors. He predicted that the invasion of Iraq would be “very expensive” and have “very serious” and “bloody” consequences. And he warned that should the United States invade Iraq, the ensuing war could “swell the ranks of terrorists,” sidetrack US foreign policy from grappling with the more important Israeli-Palestinian conflict, and possibly “destabilize Arab regimes in the region”—the irony being that “one of Saddam’s strategic objectives” was precisely such destabilization.

Notwithstanding Scowcroft’s status as a Washington “wise man,” he was willing to challenge the White House, members of Congress, and the Washington consensus. Of course, that independence of thought may have been part of Scowcroft’s wisdom—what some of those close to him referred to as his willingness to speak truth to power.

For these and other reasons, Scowcroft set an extraordinary example. More than keeping the trains running, he fashioned the train schedules, prevented collisions, and—sometimes—helped plan new railway lines. In his memoir, Arthur Miller wrote, “The political world…is fundamentally beyond anyone’s control.” Miller likened the arena within which Scowcroft thrived to “a kind of vehicle that only needs a change of drivers in order to steer it away from its frequent hair-raising visits to the edge of the cliff.” Brent Scowcroft would have disagreed. Perhaps better than anyone in recent history, the two-time national security advisor and Washingtonian “wise man” was able to keep US foreign policy and national security away from cliffs’ edges.

Bartholomew (“Bat”) Sparrow is a nonresident senior fellow with the Scowcroft Center for Strategy and Security. He is Professor of Government at The University of Texas at Austin and the author of The Strategist: Brent Scowcroft and the Call of National Security (2015).

Many have walked the halls of power, but few are deserving of the title of statesman. General Brent Scowcroft embodied statesmanship and leaves a legacy that will survive his passing to shape US foreign and national security strategy and policy for generations to come. Indeed, the country and the world have lost an historic force for stability and security, a legendary strategist who ended the decades-long Cold War without a shot.

Atlantic Council experts react to the passing of Brent Scowcroft and reflect on his legacy as a statesman, strategist, and public servant.

The legacy Brent Scowcroft leaves behind

With Brent Scowcroft’s passing yesterday at age ninety-five, the United States lost one of the central players in the transatlantic community’s success in bringing a peaceful end to the half-century-long Cold War with the Soviet Union, in the remaking of the European map to include a reunified Germany, and in providing the opportunity for the spread of democracy and freedom to Central and Eastern Europe.