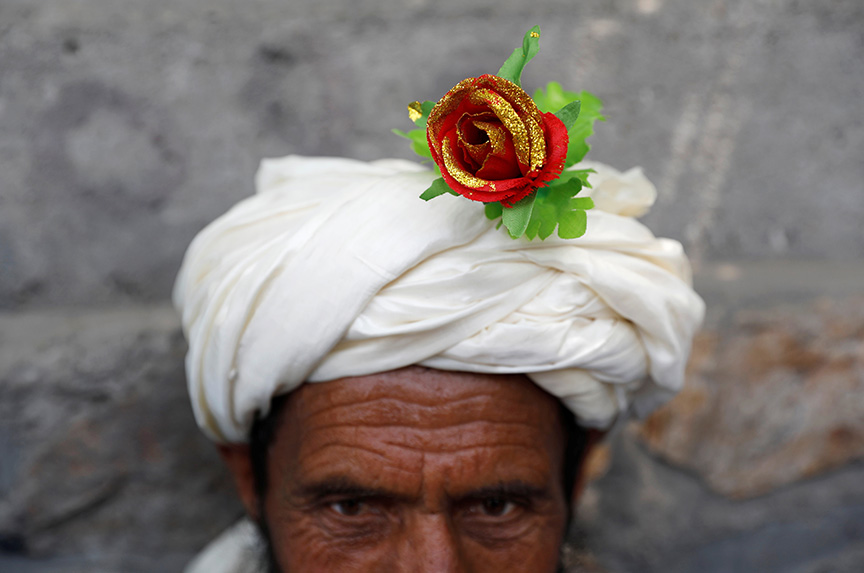 A man participating in a peace march in Kabul, Afghanistan, on June 18, 2018, wore an artificial flower in his turban. (Reuters/Mohammad Ismail)

US troops have now been present in Afghanistan for the past seventeen years. Initially, the US-led offensive that came in response to al Qaeda’s attack on the United States on September 11, 2001, was mainly an air campaign, supported by indigenous anti-Taliban forces on the ground. This approach proved highly effective. Al Qaeda and Taliban command-and-control centers across Afghanistan were dismantled within days. Most of their commanders were forced to flee to safe havens in Pakistan.

Assuming the enemy had been defeated and the terrorist threat drastically diminished, Western allies quickly claimed victory and shifted attention to other priorities. Circa 2005, while the new Afghan government was busy with state-building chores, politicking and reconstruction activities, signs emerged that the Taliban had not sat idle; regrouped, reenergized, and resurgent, they took advantage of fissures in governance, inadequate security measures, growing dissatisfaction tied to corruption and rule of law, and territorial soft-spots—first in opium-producing areas. Their initial goal: using neo-jihadi rhetoric to keep Afghanistan off balance.

Fast forward to 2018. Despite US/NATO combat ebbs and flows, which shifted in 2014 when combat duties were transferred to Afghan forces, and the staggering international aid programs —estimated upward of $200 billion during this time period for rebuilding efforts—Afghanistan today faces a raging Taliban militancy that aims to demoralize and undermine political stability. Despite the gains and sacrifices made by Afghans and their allies, mounting human losses, growing ethnic rifts, economic woes, and weakened political consensus have disrupted part of the “self-reliance” agenda. Further complicating the Afghan riddle, new geopolitical rivalries have made it even more challenging to reach a comprehensive political settlement leading to international disengagement.

Compared to seventeen years ago, Afghanistan today is a changed country. It is, nonetheless, fragile and in need of solutions—fast. Several out-of-sync clocks are ticking in key areas: political reconciliation, tactical escalation of violence, donor fatigue, US political reprioritization, regional realignments, and the Afghan political calendar.

The recent US decision to spearhead a nascent peace process by agreeing to explore new options and enter into direct talks with the Taliban through a newly appointed and experienced diplomat, forms the policy vortex that is tasked to untangle the riddle and move the interlinked processes forward.

However, the complex nature of the puzzle will require creative skills, careful juggling, and recalibration of the various pieces, readjustment of the timelines through sequencing and synchronization, honest brokering, and broad-based consultation.

Afghanistan enjoyed strong consensus at home and abroad for several years. However, the big-tent policy within the country that was complemented by a relatively supportive regional consensus post 2001 has steadily weakened since other international crises have cast a shadow.

Problematic Afghan elections held in 2009 and 2014 left bitter memories and caused a loss of trust in key electoral pockets. A few of the reforms that were agreed to have yet to be implemented.

Any attempts toward an Afghan-owned peace effort will need a stronger consensus among political elites and civil society representatives. As proposed by Zalmay Khalilzad, the new US envoy charged with reconciliation, both the Taliban and the Afghan government need to agree on forming authoritative teams to pursue future talks. However, that is only one item in a complex process that needs buy-in based on modalities, end-state objectives, benchmarks, leverages, and assurances. Besides, the Taliban’s wants and asks, just like Pakistan’s strategic motivations, are not clearly defined.

External stakeholders also have new priorities with which to contend. In a blunt assessment of US-Russia relations, Afghanistan’s deputy foreign minister last week warned that “tensions are slowly moving from Ukraine toward Afghanistan.” Alluding to other regional actors, he said, “Afghanistan should not expect Pakistan to help the Afghan peace process… and Kabul should not expect Beijing to put pressure on Pakistan to help the Afghan peace process.”

Meanwhile, as part of renewed outreach, it will be crucial to start diplomatic consultations with regional stakeholders who have legitimate concerns about the threat of terrorism, extremism, and instability. Pakistan, where the Taliban’s leadership is headquartered, will need to be engaged on a regular basis.

Afghanistan’s political calendar, including two sets of elections—parliamentary next week and presidential next year—faces several hurdles. While some are calling for a partial revision to accommodate new developments and, in case there is progress on the peace front at a later time, to better align and synchronize it with the established calendar, others are skeptical and propose more drastic measures.

Although preparations for the October 20 parliamentary elections are incomplete and causing public angst, many now view it as a pilot for presidential elections.  All efforts by the main political actors are geared toward gaining a sizeable number of seats through sympathetic candidates in the lower and upper houses of parliament. The winning sides would automatically garner advantage over future legislation and influence-peddling activities.

Among other options being discussed in political circles are postponement of presidential elections or finding a mechanism that would allow the current government to act as a caretaker authority tasked with paving the way for a transitional process. This process might take on different forms depending on a number of factors.

The one issue that might derail or stall the whole process is geared to progress—or lack thereof—with current reconciliation overtures. If serious progress is made, all sides would need to agree to another mechanism that allows for a new power-sharing arrangement, and maybe even a review of the Constitution at a later date. There are suggestions to convene a gathering similar to the December 2001 Bonn conference where Afghan and international stakeholders signed off on a political roadmap. For the sake of legitimacy, any option being considered needs to have strong buy in and, to the extent possible, fall within the country’s legal confines and democratic framework.

Whichever process is eventually adopted, it will be crucial to maintain a level playing field to assure less violence, reduce the terrorist threat, protect past gains, and strengthen political legitimacy and participation. These goals can be best realized through synchronization, consultation, inclusivity, and consensus-building.

Omar Samad is a consultant and analyst, former senior strategy adviser to the national unity government in Afghanistan, and ambassador of Afghanistan to Canada and France. Follow him on Twitter @OmSamad.