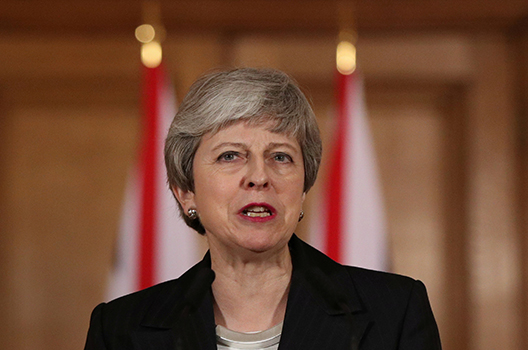 Britain’s departure from the European Union (EU) will not take place on March 29, as British Prime Minister Theresa May has promised on countless occasions in the past two years. But a week which has seen the EU wrench the Brexit timetable from May’s hands will still be followed by one which could well set the course for Britain’s relations with Europe for generations to come.

It is not just the decisions taken by the European Council, comprising the EU’s heads of government, that has so transformed the atmosphere. On March 20, May appealed over Parliament’s head to the British people. But the result was that she entirely lost her authority in Parliament itself, ensuring that it will be the House of Commons, and not her own government, that now has effective control of the Brexit agenda.

Moreover, it is now almost impossible to envisage that May will remain as prime minister for more than a few more months, indeed it may be more sensible to reckon her political lifespan in weeks or even days.

Next week will determine one key element of the great Brexit saga: will Britain exit the EU on the terms reached in the Withdrawal Agreement concluded with the European Commission last November?

Almost certainly, it will not. May will either be defeated if she puts forward a motion to approve the agreement for a third time, or she will simply abandon any further attempt to present it to Parliament.

There was a point in the last few days when it did seem possible, though still unlikely, that she might secure a majority in the House of Commons for the Withdrawal Agreement. But that was before she launched an astonishing attack on the whole parliamentary process on March 20 when she delivered a diatribe against pretty much the entirety of Britain’s elected representatives.

Standing at her residence at 10 Downing Street, and clearly addressing the 66 million people of Britain rather than her 642 fellow MPs, she declared: “Of this I am absolutely certain. You, the public, have had enough. You’re tired of the infighting; you’re tired of the political games and the arcane procedural rows; tired of MPs talking about nothing but Brexit when you have real concerns about your children’s schools, our National Health Service, knife crime.”

While this message certainly does reflect much of the mood in the country, it had one disastrous result for May, as it rapidly became clear that her assault on Britain’s elected representatives meant that she could no longer hope to secure any significant support for her deal from the opposition Labour Party. And for the head of a minority government that had previously been looking to secure such support to edge the agreement over the line, that was probably fatal. Her speech also intensified internal opposition in her own party and prompted her supposed allies in Parliament, Northern Ireland’s Democratic Unionist Party, to issue a statement saying: “Lectures by the prime minister putting the blame on others cannot disguise the responsibility her government bears for the current debacle.”

May’s speech was not only followed by an extraordinary denunciation from her principal party manager, Chief Whip Julian Smith, who dubbed her address “appalling,” but also by the Commons staff recommending that MPs should take taxis when leaving Parliament because their personal safety was at risk. One MP, the independent Anna Soubry, said on March 22 she had been advised by police that she should not go home to her constituency because of death threats.

May then followed up one miscalculation with another. On the evening of March 21 she officially requested, as she had reluctantly told Parliament she would do, an extension to the previous March 29 deadline for Britain to leave the EU. But in ninety minutes of questioning from the heads of the other twenty-seven EU member states, she could not give a coherent answer to the key question: what would she do if she failed in a third attempt to secure parliamentary approval for the November agreement?

Instead of laying down the terms for Britain’s withdrawal and paving the way to a new era in which the UK would “take back control”—as Brexit campaigners have urged for the last three years—both the prime minister and the country find that for the next several weeks their actions are more circumscribed by the EU than ever before.

That is because the EU has said that it will only grant a guaranteed extension to the current exit day deadline to April 12. If  May’s deal gets through Parliament, Brussels will allow a further extension to May 22 so Parliament can then pass all the necessary legal changes required to put the Withdrawal Agreement into effect.

But if May is defeated in such a vote, or simply abandons the attempt to hold one, then Parliament has until April 12 to come up with an alternative way forward—or Britain will crash out of the EU without any deal at all, with forty-six years of trade and investment agreements chucked into the dustbin.

And it will be Parliament, not the government, that will determine whatever outcome is eventually reached.

On March 18, John Bercow, the speaker of the House of Commons, ruled that May could not put her Withdrawal Agreement to a third vote unless there were substantial changes. However, nobody is concerned any more about the practicality of bringing the motion back for a third time largely because they don’t think May would win and she could possibly argue that the European Council’s changed deadline is sufficient to argue that there has been a substantial change in the environment for the motion to be introduced.

The apparent inevitability of another defeat for the Withdrawal Agreement means that this time there will be a majority in the House of Commons for a series of non-binding votes indicating support for various propositions. Faced with this particular prospect, the government is currently considering introducing its own motion to allow such indicative votes, a move it has previously vigorously opposed.

Although the definitive procedures for such indicative votes are not yet clear—the current expectation is that they will be held on March 26 or March 27—the government is currently understood to be considering that they should cover seven possible outcomes:

The government will also be compelled to respond next week to a petition calling for the revocation of Article 50, which has secured around 3.5 million signatures since it was launched on March 20. The petition has no legal force, beyond requiring a response in Parliament, but it draws attention to the persistence of majority public support for staying in the EU, with opinion polls showing that Britons now favour remaining in the EU by 54 to 46 per cent.

It is commonly said that there is no natural majority in the House of Commons for any particular solution. But, given the likelihood that the indicative votes will be conducted on the basis that MPs can vote as they wish—without having to follow strict orders from their party managers, the “whips”—they should at least indicate potential ways forward.

Moreover, there are bound to be amendments to whatever motions are finally tabled, and these may well allow, in effect, for compromises to be reached between otherwise competing claims regarding the best way forward.

But hanging over the House of Commons as it considers what course of action to take will be the instructions laid down by the European Council on March 21: make your mind up by April 12, and then either quit the EU by May 22 or put up candidates to take part in the European elections on May 23.

Taking part in these elections poses no problems to the smaller opposition parties who want the UK to stay in the EU, notably the Scottish Nationalists and the Liberal Democrats. And this almost certainly also applies to the eleven MPs who defected from the Labour and Conservative parties to form the new Independent Group.

But for the supposedly ruling Conservative Party, torn in all directions by Brexit, and for the main opposition Labour Party, which numbers several dozen MPs whose constituents voted heavily to leave the EU in the 2016 referendum, the idea of taking part in another set of European elections poses some very real dilemmas.