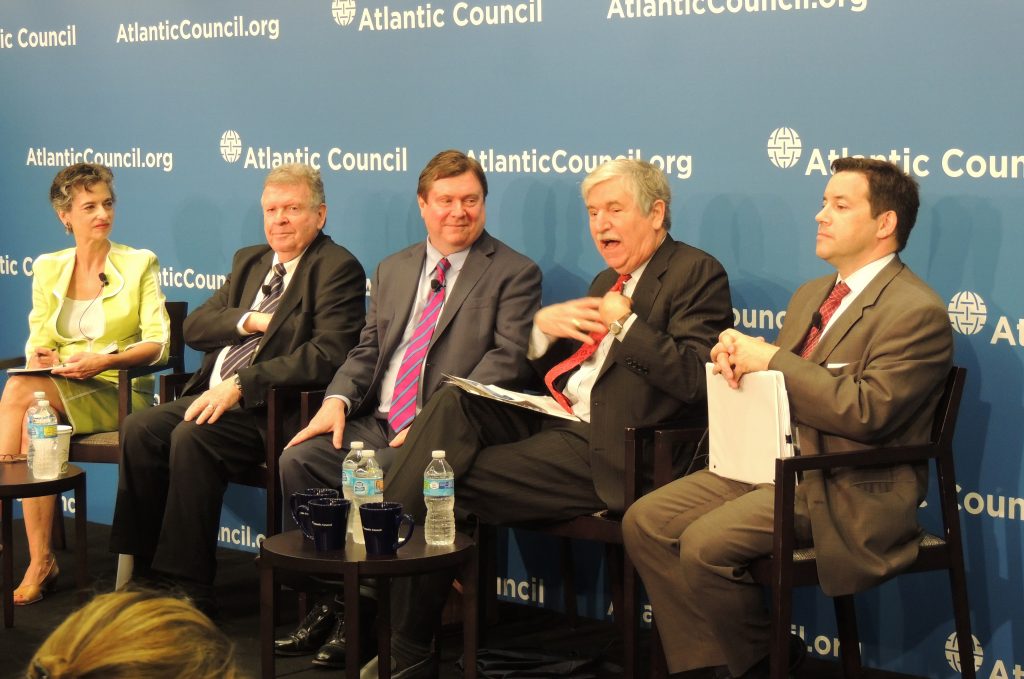 From left: Barbara Slavin, a Senior Fellow in the Atlantic Council’s South Asia Center, moderated a discussion on the nuclear agreement with Iran July 15 with Thomas Shea, a former International Atomic Energy Agency safeguards official; Jim Walsh, a Research Associate in the Security Studies Program at Massachusetts Institute of Technology; John Limbert, a Professor of Middle Eastern Studies at the US Naval Academy; and Jon Wolfsthal, Senior Director for Arms Control and Nonproliferation in the National Security Council.

Iran is not permitted to build a nuclear weapon after the duration of the agreement reached in Vienna this week, nor does the deal give the Islamic Republic a “signing bonus” in terms of immediate sanctions relief, a senior Obama administration official said July 15.

“Iran’s responsibility to abide by the Additional Protocol is in perpetuity. It is not sunset. It is not limited,” said Jon Wolfsthal, Senior Director for Arms Control and Nonproliferation in the National Security Council, addressing a key criticism of the deal reached between the P5+1—the United States, the United Kingdom, Russia, China, France and Germany—and Iran.

Iran has agreed to implement the Additional Protocol that would allow inspectors from the United Nations’ nuclear watchdog, the International Atomic Energy Agency (IAEA), to inspect any site they consider suspicious. Iran will also be required to comply with the terms of the nuclear Non-Proliferation Treaty (NPT), which prevents it from acquiring a nuclear weapon.

If Iran refuses to allow access to the IAEA inspectors “immediately the red flag goes up. There is no cat and mouse,” said Wolfsthal. And if that access isn’t given within twenty-four days, Iran will be deemed to be in violation of the agreement and sanctions will be snapped back.

The deal limits Iran’s enrichment program for fifteen years. Restrictions on research and development will be eased in about ten years. However, some restrictions will remain in place for up to twenty-five years.

Wolfsthal rebuffed another point of criticism that Iran will immediately receive billions of dollars in cash for signing the deal.

US and UN sanctions will not be lifted until Iran comes into full compliance with the terms of the agreement, which includes doing a lot of “very difficult things that they have been unwilling to do for many decades,” he said.

“There is no signing bonus. There is no big pot of money that Iran gets the day they all get home,” he added.

Even if sanctions are lifted, there is a “snap back” provision that allows any veto-wielding UN member to re-impose sanctions if Iran is not complying with the terms of the deal.

Wolfsthal spoke at the Atlantic Council a day after the deal was announced in Vienna. He was joined in a panel discussion by Thomas Shea, a former IAEA safeguards official; Jim Walsh, a Research Associate in the Security Studies Program at Massachusetts Institute of Technology; and John Limbert, a Professor of Middle Eastern Studies at the US Naval Academy. Barbara Slavin, a Senior Fellow in the Atlantic Council’s South Asia Center, moderated the discussion.

Critics and even some supporters of the deal worry that Iran will divert cash it receives as a result of the lifting of sanctions to its proxy groups in the region, including Hezbollah in Lebanon.

“Will some of the billions of dollars that Iran will receive from this deal wind up in the pocket of Hezbollah, of the popular mobilization units in Iraq, or Bashar al-Assad? Yes, of course it will,” said Slavin, who supports the deal.

But, she added, if the Iranian regime wants to maintain its legitimacy it will have to meet some of the aspirations of the Iranian people who are suffering high levels of unemployment.

“If a rat takes up residence we will be there and we will know about it,” said Wolfsthal.

Supporters of the deal say the international community’s ability to detect nuclear activity in Iran has been significantly increased as a result of the intrusive inspections capabilities afforded by the agreement.

“It is extremely unlikely that Iran could be able to build anything of significance and begin to operate it without being detected,” said Wolfsthal.

Role of the IAEA

Walsh said that the American public and members of Congress have an idea about verification “frozen in their minds that goes to the early 1990s… to Iraq and North Korea.”

“This is not your father’s IAEA any more,” he added noting that the agency today has an array of tools and technology at hand that it can use in its effort to verify of a country’s compliance with a nuclear agreement.

The IAEA would be responsible for verifying Iran’s compliance with the agreement.

Noting that Iran is more than twice the size of Texas, Shea said the agency would face five challenges:

The IAEA will need to have clear authority on verification. A UN Security Council resolution is expected to clarify this authority.

The Obama administration and its P5+1 partners have already pledged to support the IAEA’s work.

“That will take money, but quite frankly it is a bargain … compared to what it takes to try and surveil Iran’s nuclear program on our own, it is a bargain compared to the military preparations we will have to take in order to head off a nuclear weapons program in Iran, and it is a bargain in terms of what the IAEA does for international peace and security,” said Wolfsthal.

The Obama administration and its P5+1 allies expect Iran to faithfully implement the nuclear agreement, but they are not leaving that to trust.

“This agreement is not about trust, it is about verification,” said Limbert, a former official at the US Embassy in Tehran who was held captive during the 1979 hostage crisis.

But, Walsh added: “This is not our first rodeo. This is not the first time we have wrestled with problems of verification and potential cheating.”

He said he was reassured about verification in part because Iran is now what he called the “most-watched country in the world”—including by Israel, Saudi Arabia, and Iranian opposition groups.

The nuclear agreement gives the United States and its P5+1 allies the opportunity to lock Iran into a peaceful nuclear future, Wash said.

What will Congress do?

Congress has sixty days, including its one-month August recess, to review the agreement.

US President Barack Obama has vowed to veto any effort to kill the deal. It is unclear whether congressional critics will be able to put together a veto-proof majority.

Matthew Kroenig, a Nonresident Senior Fellow at the Atlantic Council’s Brent Scowcroft Center on International Security and a critic of the deal, said in a council phone briefing that while it is unlikely Congress will have the two-thirds majority to override a presidential veto, that could change once some Democrats such as Sen. Chuck Schumer of New York make up their minds on the deal.