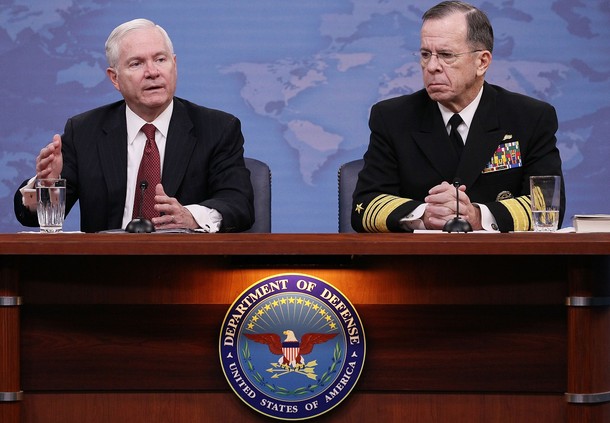 The age of austerity for NATO defense budgets is finally hitting the United States.   Here, though, it’s a bit different, with "cuts" coming in the Washington sense of "spending more than last year but less than projected."

To be sure, this isn’t the impression one would get scanning the headlines.  NYT blares "Pentagon Seeks Biggest Military Cuts Since Before 9/11." WaPo proclaims, "Pentagon to cut spending by $78 billion, reduce troop strength." And BBC echoes, "US defence budget to be cut by $78bn."

But a closer look reveals the $78 billion cuts announced by Defense Secretary Robert Gates are in projected spending.  Over the next five years.  The effect, as WaPo’s Craig Whitlock puts it, is that "the military would see annual budget increases that barely exceed inflation in coming years and that its budget will effectively remain frozen in 2015 and 2016."   The Pentagon’s 2012 budget of $553 billion (which, incidentally, is exclusive of the funding for the wars in Iraq and Afghanistan, which are separate budgets) is a real (that is, inflation adjusted) increase.

And, I hasten to add, Gates is not pretending otherwise.  Appearing on last evening’s PBS NewsHour with Jim Lehrer, he observed, "We will have modest growth in the defense budget for the next three fiscal years.  And then the last two years of the five-year period, we will be protected against inflation but not have real growth.  So this is really all about a reduction in the rate of growth, not actual dollars in defense.  I mean, because of inflation, because of very low rates of growth, we will get more money in FY ’13 – fiscal year ’13 – than we did in ’12, and so on."

Something tells me British Chief of Defense Staff Sir David Richards would be able to keep a stiff upper lip were he faced with "cuts" of this magnitude.

While "barely exceeding inflation" may be an odd definition of "cut," the fact of the matter is that $78 billion is real money, even to the Pentagon.  And there are in fact major weapons systems that will no longer see the light of day.  Most notably  $15 billion for the Marine Corps’ Expeditionary Fighting Vehicle will be eliminated; the F-35 Joint Strike Fighter will be delayed and the Marine Corps version may be scrapped altogether; and the Surface-Launched Advanced Medium-Range Air-to-Air Missile will be canceled.

And Gates proposes a roughly 6 percent reduction in Army and Marine Corps manpower, a reduction of 27,000 soldiers and 20,000 marines.  This will not happen until 2015, long after the Iraq commitment is over and as the Afghanistan mission winds down.

Other cost savings will be achieved, assuming Congress goes along, by raising fees on health insurance for veterans and the old Washington standby of eliminating waste.   Says Gates, "This department simply cannot risk continuing down the same path where our investment priorities, bureaucratic habits and lax attitudes toward costs are increasingly divorced from the real threats of today, the growing perils of tomorrow and the nation’s grim financial outlook."

Mostly, this will come in the form of bureaucratic restructuring, including consolidation of a number of logistical headquarters, eliminating large number of civilian contractors, and shrinking the number of general and admiral billets to pre-war levels.

While Gates can implement some of these decisions unilaterally, Congress must approve the lion’s share.   And, despite Republican calls for fiscal discipline and belt-tightening, there’s not much appetite for cutting Defense during wartime.

Howard P. "Buck" McKeon, the incoming chairman of the House Armed Services Committee, declared, "I will not stand idly by and watch the White House gut defense when Americans are deployed in harm’s way."

Reshuffling to Other Priorities

Perhaps the most interesting aspect of all this is that the "cuts" are actually much deeper than the $76 billion figure being bandied about in the press.   The recent budget review actually identified an additional $100 billion in "savings" above and beyond that number.  But they’ve plowed that back into their budget request, shoring up funding in other areas.

As summarized by Robert Haddick at Small Wars Journal the new money will be allocated thusly:

a. About $28 billion on unexpected training, operations, and maintenance costs.

b. Remaining $70 billion goes to the services for procurement:

i. Air Force: more Reapers and start of next-gen nuclear-capable bomber, which will have an unmanned option. More satellite launchers. New F-15 radars.

Again, this is hardly "austerity" in the sense the rest of the NATO Allies are experiencing.    But that’s a reflection of  not only greater financial resources here but of the responsibilities that come with being a global superpower.

Further, let me again re-emphasize that Gates is not pretending that these are deep cuts.   Or "cuts" at all.   Rather, he’s recognizing that the era of unlimited growth in the American defense budget are over, at least for a while, and acting accordingly.

Even in the context of a military budget that’s likely larger than those of the rest of the countries on the planet combined, there are limits.  And Gates has managed to achieve consensus among the service chiefs on rather significant re-prioritization of these huge but not unlimited resources. That’s a rather remarkable achievement in light of the long history of Pentagon budget infighting.