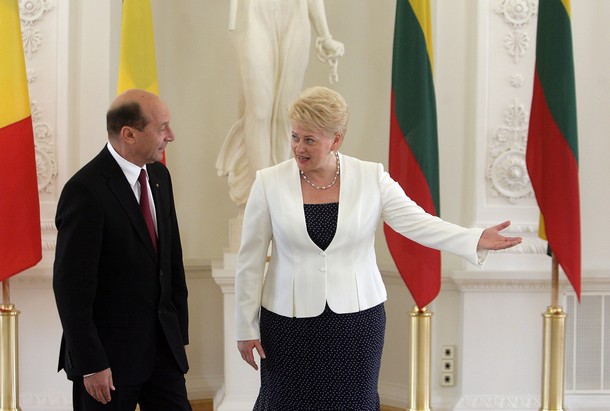 Romanian President Traian Basescu is on a mission to right the wrongs of Stalin, and he does not care what the Western European media have to say about it.  In a recent joint interview with Moldovan Acting President Mihai Ghimpu, Basescu affirmed that Romania has granted citizenship to 17,000 Moldovan nationals this year. News sources in Western Europe have criticized Romania’s actions by alleging that, by giving Moldovans Romanian (and thus also European Union) citizenship, Bucharest is in essence providing them a backdoor entrance into the European common market.

More than half a million Moldovan nationals work inside the EU, and most of them do so illegally.  Basescu does not deny this fact, but remains entirely unapologetic.  In the August interview he stressed that Romania’s policies fall within the 1997 Council of Europe convention on granting citizenship, and alleged that they are rectifying a historical injustice.  Basescu proclaimed, “It is not citizen Dumitrescu from [the Moldovan city of] Cahul who has decided to lose his [Romanian] nationality, it’s Stalin who has decided for him,” alluding to the Soviet Union’s annexation of Romanian Bessarabia and renaming it the Moldovan Soviet Socialist Republic following WWII.

Romania is certainly not alone in handing out citizenship to its diaspora.  In May of this year, Hungary’s new Fidesz government passed a law allowing all ethnic Hungarians living abroad to get Hungarian citizenship.  About 2.5 million Hungarians live in neighboring countries in the region, so the implications of the law are readily apparent.  The law raised particular ire in Slovakia, where Hungarians make up 9.6% of the total population and where mutual minority issues have been a particular bone of contention between the two countries.  Objections from Hungary’s other neighbors have been mostly muted, though.

Elsewhere in the region, Bulgaria has been granting its citizenship to interested Macedonians.  Serbia is also considering the practice.  So far, Belgrade has been extending economic and cultural ties with its diaspora, but stopping short of granting citizenship for Serbs outside the country.  Undoubtedly, were it to press ahead with full citizenship for Serbs in fragile Bosnia or explosive Kosovo, Serbia’s actions could prove very destabilizing for the Balkans.

A Belgianization of Central Europe is thus underway.  Belgium has a peculiar system of double federalism under which the country is divided up territorially and linguistically.  In addition to the separately governed territories of Wallonia, Flanders, and Brussels, Belgium is broken up into the French-speaking, Dutch-speaking, and German-speaking communities, which roughly – but not entirely neatly – coincide with the country’s territorial federal units.

Correspondingly, by expanding the practice of granting citizenship rights to their ethnic co-nationals abroad who speak the same language – perhaps the clearest way to tell the various regional peoples apart – the Central European states are decoupling citizenship from territory.  Instead of a collection of separate nation-states whose citizens all share an over-arching European citizenship, as is predominantly the case in Western Europe, the Central European countries are creating a region of separate territories with messily overlapping communities of peoples that share the same language – and to varying degrees the same culture and religion – but maintain competing territorial allegiances.  Such an arrangement has failed to defuse the tensions between Belgium’s Walloons and the Flemish, and is unlikely to pacify Central European nationalism now.

Bratislava has been loudly protesting this rising trend of Belgianization in its neighborhood, mainly in response to Budapest’s overtures to the ethnic Hungarian minority living inside Slovakia.  However, other countries in the region should express more vocal concern as well.

The Baltic States of Latvia and Estonia – which have sizeable ethnic Russian minorities living within them – have a particularly strong stake in assuring that citizenship rights are strongly rooted with where an individual resides, rather than what language one speaks.  Illustratively, Moscow has been granting citizenship to its Russian diaspora for years.   Yet, following the 2008 Russian-Georgian War, Russian President Dmitri Medvedev expressly stated that “protecting Russian nationals abroad” was one of the preconditions allowing for a Russian military invasion.

It is very unlikely that citizenship issues between Central European states – especially those already together in NATO and the EU – will lead to war.  Yet, nationalist-fueled conflict can take many forms, and its inevitable result is the inability and unwillingness to work together.  Despite the Lisbon Treaty’s EU reforms, Europe remains a highly fragmented political unit.  But to effectively deal with the ongoing fallout from the global financial crisis as well as other issues and diplomatic upheavals as they arise, ever closer European solidarity will be vital.

Possible implication of regional citizenship policies should also concern the US.  Rising tensions from competing citizenship claims will lead to a weakening North Atlantic Alliance.  A weaker NATO, in turn, will limit Washington’s list of options to choose from for addressing European and global crises.  It is thus in the United States’ best interest to help mollify Central Europe’s rising nationalist fervor, and thus keep NATO – the most dependable tool in Washington’s diplomatic toolbox – ever at the ready.