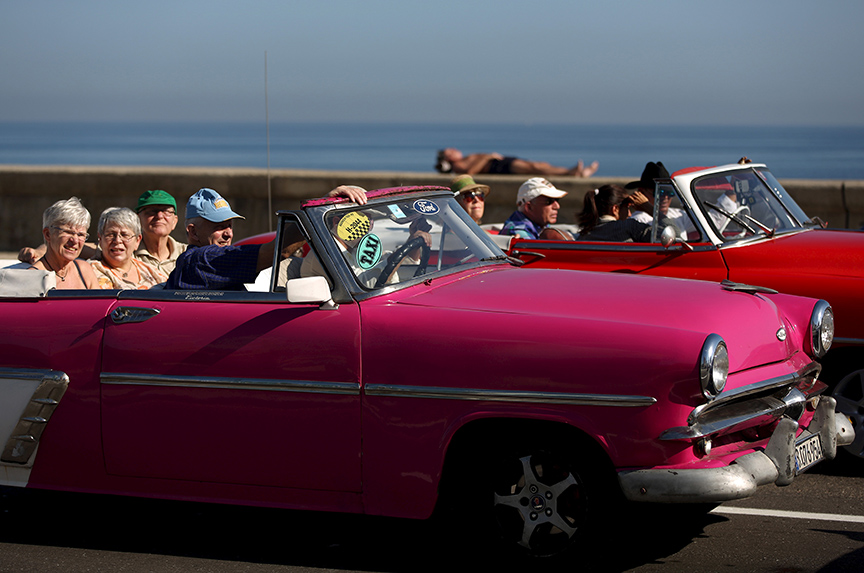 Tourists rode in a vintage car along the seafront Malecón in Havana on March 15, 2016. A surge in tourism to Cuba followed a rapprochement between Cuba and the United States in 2015. (Reuters/Alexandre Meneghini)

If US President Donald J. Trump were to roll back engagement with Cuba it would chill US private sector investment, hurt Cuban entrepreneurs, and create an opportunity for Russia to assert itself on an island that lies merely ninety miles off the US coast, according to the Atlantic Council’s Jason Marczak, director of the Latin America Economic Growth Initiative at the Atlantic Council’s Adrienne Arsht Latin America Center.

Trump is expected to announce changes to the United States’ Cuba policy on June 16. He is reportedly considering prohibiting business with Cuban companies that have ties to the military and tightening travel restrictions.

Under Trump’s predecessor, Barack Obama, historic progress was made in the US-Cuba relationship, which had been frozen for more than fifty years. A diplomatic détente in the summer of 2015 was followed by both countries opening embassies in their respective capitals and a visit by Obama to Havana in March of 2016.

Now, that progress hangs in the balance.

Q: What changes should we expect to the United States’ Cuba policy?

Marczak: We won’t know what Trump will announce until he actually makes an announcement. What is expected is a partial rollback in the policies that have been implemented since the beginning of normalization in December of 2014, specifically travel restrictions and business interactions.

On the business side, there is a strong momentum toward further restricting the ability of US business entities from engaging in any type of transactions that would have ties to the Cuban state or the Cuban military.

Q: What impact will such changes have on Americans and US businesses such as Google and Airbnb?

Marczak: US businesses—in the technology, tourism, and agriculture sector—have ramped up their investment in Cuba as a result of the regulatory openings. Cuba is not a large market, but companies have decided that it is worth the risk to invest there because of the potential for long-term rewards. Up to 14,000 US jobs are now dependent upon business engagement with Cuba, according to an analysis by Engage Cuba. Those openings for US business and US workers will be potentially threatened if business interactions are limited.

It’s critical to realize that US Cuba policy has consistently been inconsistent over the years. Many businesses decided post-December 2014 that there was a clear shift in momentum of engagement. They decided they were going to make an investment in Cuba.

Rolling back some of the new policies could create an overall chill on US business interest in Cuba moving forward. Even though new restrictions will likely still allow for a number of transactions, albeit at a reduced level, as a business owner you would be less inclined to invest in Cuba now because you don’t know what is going to happen next; you don’t know the long-term trajectory of US policy.

In the two years that Arbnb has been operating in Cuba nearly $40 million has been paid to Cuban hosts. So, the impact is just not on US business, but also on self-employed Cubans, who now number a little over half a million. This nascent Cuban private sector is a growing bulwark against the economic shackles that the Castro regime has consistently placed on its people. US business engagement, as well as unlimited remittances to the island, have been critical to helping these small businesses thrive. By scaling that back, yes, it is harmful to US business, but it is comparatively much more harmful to the privately employed Cubans who are just trying to eke out a life of economic dignity.

Q: Why is this policy shift being considered in the first place?

Marczak: Over three years ago, an Atlantic Council poll found that 56 percent of Americans favor changing US policy toward Cuba. Now after the increased normalization, a recent Morning Consult poll finds that 65 percent support maintaining the policy changes.

In Miami-Dade County, specifically, Cuban-Americans want the embargo to be lifted according to work by [Florida International University] FIU. Politically, some see a rollback in policy as being welcomed by core voters in the swing state of Florida. I do not think that’s the case. Cuban-American voters are increasingly changing their opinion about what is the best way to influence policy in Cuba and that’s through engagement.

Q: Russia seeks to regain influence in Cuba. Do you see Russia, and perhaps even China, benefiting from a strain in the US-Cuba relationship?

Marczak: Russia looks to opportunistic ways to be a thorn in US interests, whether it is the increased Russian involvement in Venezuela or whether it is in Cuba. Cuba was incredibly dependent on the Soviet Union and felt the effects of their reliance when the Soviet Union collapsed. The Cubans largely have tried to learn the lesson that their long-term economic survival means that the economy needs to be diversified. That’s why the economic debt Venezuela is in right now is worrisome to the Castro government.

Any moves by the United States to take a step back in relations with Cuba will not only aggravate tensions with the island, it will also give rise to a new moment of anti-Americanism in Cuba, which has subsided substantially over the last couple of years. Cuba will look to see who can help it fill some of its economic needs. If you have US businesses and US remittances being pulled back and, at the same time, less and less Venezuelan largesse, Cuba will have no other choice than to look more and more to other partners. And the Russians are more than willing to take a larger stake in an island just ninety miles off US shores.

Q: What have been the tangible benefits of the US-Cuba rapprochement thus far for Americans as well as for Cubans?

Marczak: First, Americans are freely able to travel for purposeful reasons to a country in the Caribbean. Another tangible benefit are the business opportunities in tourism, technology, and agriculture. From the US government side, it has opened up avenues for dialogue with the Cuban government on issues of mutual interest ranging from preventing drug trafficking to cooperation on health issues such as Zika to discussions on how to prevent natural disasters.

Cuba has long been a thorn in the side of US relations with the rest of Latin America. Across the region there had been a growing frustration with US policy. Engaging in steps toward normalization has made it much easier for our friends and partners across the Americas to be able to speak on behalf of US interests. But it goes beyond the Americas. Cuba plays an outsized role in global foreign policy because of the historic tension it has had with the United States.

On the Cuban side, rapprochement has resulted in an incredible increase in the number of foreign visitors to Cuba. This has provided a much-needed infusion of cash that helps self-employed Cubans to be able to make ends meet and grow their businesses. The influx of travelers has exposed Cubans to ideas and values that go beyond what is permitted under strict government controls.

The human rights situation in Cuba is atrocious. Cuba has largely moved away from longer-term detentions, but what has increased is short-term arbitrary detentions. People are not allowed to express themselves. There is a constant pervasion of the state into every aspect of an individual’s life. At the same time, economic liberty is also important and the US opening with Cuba has given many Cubans access to economic liberty.

Q: Do you expect wider regional ramifications from a shift in US policy?

Marczak: I expect governments across the region to condemn policies that significantly roll back progress in the US-Cuba relationship.

Q: Secretary of State Rex Tillerson recently stated that the rapprochement had not produced a positive change in the Castro government’s behavior. Do you agree?

Marczak: The US rapprochement is not about trying to extract concessions from the Castro government. It is about trying to empower the Cuban people and the Cuban private sector to have a greater voice. The more the citizenry of a country has a voice the more they will demand change. That’s what this is about. It’s not about extracting concessions from the state itself but about being an influential player in helping to shape the future of a country whose geographic proximity makes it so vital to US national security interests.