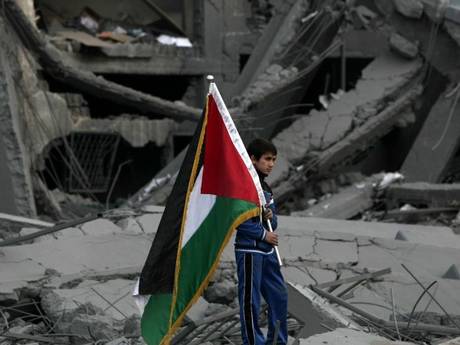 While hundreds of millions Muslims believe 9/11 was history’s biggest conspiracy, hatched by U.S. intelligence and Israel’s Mossad, to justify a global crackdown on Islamist militants, there are also countless millions of Arabs who are convinced the Nazi Holocaust was grossly exaggerated to justify “the Jewish occupation of Palestine.”

U.S. Secretary of State Hillary Clinton is to be congratulated for breaking off a trip to Myanmar with President Barack Obama to fly to the Middle East to negotiate a cease-fire between Hamas in Gaza and Jerusalem.

Neither side liked where the latest bloody conflict was headed.

Hamas’s Iranian-built Fajr-5 rockets were inaccurate and with insufficient range to reach beyond the outskirts of Israel’s heavily populated areas.

The Palestinian rocket offensive was also stymied by the accuracy of Israel’s Iron Dome anti-missile defense system. Only nine Israelis were killed versus 163 Palestinians, including seven senior Hamas commanders.

Although largely thwarted, the weapons are, in effect, the third Palestinian intifada. And the next missile upgrade, smuggled from Iran through Egypt, will bring Tel Aviv, Jerusalem and Haifa within range.

Demolished in the airstrikes, Israeli sources said, were 19 Hamas senior command centers, hundreds of underground rocket launchers, 140 smuggling tunnels and dozens of concealed operation rooms and bases in separate buildings and 26 weapon manufacturing and storage facilities along with dozens of long-range rocket launchers and launch sites.

Six Palestinians accused of working for Israeli intelligence were executed at an intersection in Gaza in front of a cheering mob. One of the bodies was attached to a motorcycle and dragged through the streets as a warning against working for Israel.

No amount of violence will hasten the creation of an independent Palestinian state in the West Bank and East Jerusalem. It is diplomatic chimera.

Israeli settlements keep growing and no one can see Jewish settlers agreeing to resettle in Israel. Many of them are Jewish fundamentalists who moved directly from the United States and have never lived in the Jewish state.

The number of Jewish settlers in the West Bank exceeds 350,000, double what it was 12 years ago. The Israel Hayom newspaper reported 300,000 Jews live in East Jerusalem.

A 10-month partial freeze on settlement expansion came to an end two years ago. One Israeli politician, Yaakov Katz, predicts the number of settlers in the West Bank and East Jerusalem would reach 1 million within five years.

At the height of the latest crisis, Arab columnists piled on about the “Holocaust that was exaggerated to justify the usurpation of Palestine.” In the Qatari daily Al-Sharq, Faiz Rashid, a Palestinian-born Jordanian columnist, demanded the Nakba be taught instead of the Holocaust.

Those who say “Remember the Nakba” want to bring to light what they call a monumental and ongoing historic injustice.

For Zionists, Palestine in 1948 was “a land without a people for a people without a land.” For Palestinians, Israel was founded in what was home for 1 million Palestinians, living in more than 700 villages and cities, who were deliberately and forcibly depopulated and renamed in 1948 following the Jewish victory in the war of independence.

Palestinians who want to live-and-let-live with Israelis fear radical retribution. Hamas’ dictatorial grip on Gaza and the growth of its clandestine influence throughout the West Bank silences moderate views.

The 18-year-olds who fought in the liberation of Europe in World War II are now four years from their 90th birthday. And those who remember the newsreels that showed bulldozers dumping thousands of naked Jewish bodies into huge common ditches are now over 70.

If it weren’t for TV’s history and military networks, the Holocaust would be ancient history.

Anything goes — and anything is believed — in a culture in which lies freely mingle with facts.

“It is a well-known fact that modern Jews are not Jews, but rather a Khazar rabble from the Caspian Sea who were forced to convert by their king due to pressure applied to him by Muslims and Christians,” writes blogger Asad Al-Azouni.

The Obama strategic pivot from Europe to Asia bypassed the Middle East — only to be pulled back to reality by Hamas and Israel.

It is also abundantly clear the United States cannot play the role of honest broker between the Jewish state and Palestinian radicals that are backed by an Egypt governed (but not yet ruled) by Muslim fundamentalists.

Arab radicals argue violence is the only way to liberate Palestine or at least to force Western powers to move it to the top of their geopolitical agenda.

And behind Muslim radicals is Iran, busily completing its clandestine preparations for a nuclear bomb. The key man in the undercover Hamas-Iran relationship was Ahmad Jabar, assassinated by a pinpoint Israeli strike against his third-floor apartment in the heart of Gaza.

For Hamas leader Khaled Meshal, 56, there is a delicate balancing act between Cairo and Tehran.

Even Egypt’s radical Muslim Brotherhood isn’t ready to jettison its peace treaty with Israel. But nothing would please Iran’s aging mullahs more than a rupture in Cairo’s relations with Washington.