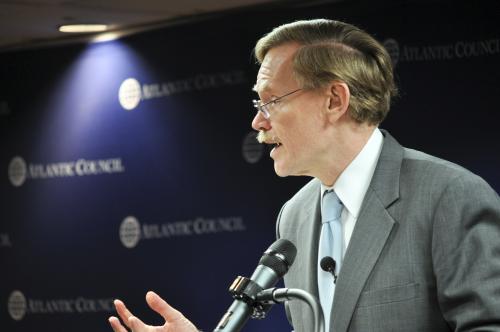 World Bank president Robert Zoellick notes he was “struck by the very different tones” in recent financial summits in West and Asia, seeing a timidity in the former and an aggressive “growth agenda” in the latter.

Addressing the Atlantic Council Thursday night, Zoellick said he’d recently traveled to the G20 finance ministerial in Scotland and the APEC meeting in Singapore and noted the contrast.  While joking that his perception could have been colored by jet lag, he saw very different agendas.   In St. Andrews, the ministers were worried about “such issues as compensation, bonuses, tax havens, and the regulatory structure.”  In Singapore, however, both the Asians and Australians were very much looking how to deal with the expected slower growth of the future — and even strive to  “create a greater growth possibility” and increase productivity — through both  deregulation and investing very heavily in their infrastructure.

Obviously, the economic climates are quite different.  The West has suffered a major shock in its financial system and is looking to avoid repeating the mistakes that led to the crisis while the East was caught up in that wave and is looking for greater control of its own destiny.  Beyond that, the demographics are wildly different.  The West is under enormous pressure to stabilize to preserve its social safety net whereas the East has a huge youth boom for whom it must find gainful employment.

Zoellick likes what he saw at APEC, noting that we learned from China in the 1990s that investments in  infrastructure can not only create jobs today but create productivity in the future.   He recently toured the Tata automobile factories in India and was impressed, noting that the car was very well engineered — “I can sit in the back seat!” — and meets all Western safety standards and yet is selling for under $3000.

He believes China, India, Brazil, Southeast Asia and others are making sufficient progress that we are seeing the possibility of creating multiple poles of growth, which could be not only a source of demand to get us out of the hole we’ve dug for ourselves but also create a healthier, more sustainable  international system.

Another less of the 1990s that he hopes that those countries don’t forget, however, is “the importance of combining macroeconomic stabilization with a social development agenda.”  He notes that failure to invest in early childhood nutrition and education can result in a “lost generation”  that simply can’t be recovered.

James Joyner is managing editor of the Atlantic Council.  Photo by Christine Mahler.